Jeremy Lin was a bench-warmer for the New York Knicks before he became an NBA sensation. Meanwhile, on the other side of the world, Knicks reject Stephon Marbury is tearing up the Chinese league. 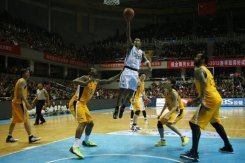 Stephon Marbury of the Beijing Ducks reacts during a match against Xijiang in Beijing in December 2011, which the Ducks won 99-97. Marbury was supposed to be washed up after 13 gruelling years in the NBA, but the one-time bad boy point guard has reinvented himself in China as the superstar of this season's revelation, the Ducks.

While "Lin-sanity" is now known across the globe, in China it's competing with "Marbury madness" after the Brooklyn native led the Beijing Ducks to the Chinese Basketball Association (CBA) championship semi-finals in style.

On Sunday, Beijing beat Zhejiang 105-91 to win the best-of-five quarter-final 3-0, propelled by a 14-point third quarter from Marbury including a thunderous dunk, drives to the rim and a pair of laser-guided three-pointers.

For some, the heroics have even eclipsed those of Lin, a fellow point guard who has captivated audiences in China and his parents' homeland Taiwan with his fairytale emergence from bit-player to superstar.

"I've been watching what (Jeremy) Lin Shuhao is doing in the NBA, but Marbury is my hero," one supporter, Meng Zhaoping, told AFP from his second-row seat at Beijing's sold-out home arena.

"The main reason a lot of people are coming to the games is to watch Ma Buli," he said, using Lin and Marbury's Chinese names.

The Knicks gave up on Marbury in 2009, after a spat with coaching staff, but his play and that of other imported players has long been key to the development of China's future basketballers.

Now the six-foot-three-inch (1.90 metre) Lin, who is US-born and bred, is giving China's estimated 300 million basketball fans hope that the country may one day produce a home-grown point guard of his quality.

The only Chinese-born players to make it in the NBA are towering centres like the seven-foot-six-inch giant Yao Ming, who retired last year.

While the CBA's level is far below the NBA, tattooed sinophile Marbury, 35, has stood out this season, and he added to his legend with Sunday's monstrous, two-handed dunk which was endlessly repeated by Chinese media.

"I had a wide-open lane to the basket, so I just went up and dunked it," six-foot-two Marbury told AFP after the game, with a big grin on his face.

"I haven't dunked at all since I've been in China, but today I had my legs under me."

Such play helped Beijing register 13 straight wins at the start of the season. Marbury, who is averaging 24 points and 6.4 assists a game, has won accolades from coaches around the league for his leadership and determination.

The former NBA All Star and multi-millionaire has adjusted well to China after arriving in 2010, manufacturing his "Starbury" brand of basketball shoes in Chinese factories and selling them online.

He writes a regular column for the English-language China Daily and has more than 200,000 followers on his Twitter-style microblog. Marbury, whose Chinese name is etched on his forearm, one day hopes to coach in China.

"He is so charismatic that people flock to that. He is a genuine person who is genuinely in love with China. People are picking up on this, it is a great thing for basketball and for America and China."

With last year's contract dispute, numerous NBA stars played in China this season including Kenyon Martin, JR Smith and Winston Chandler. All lost to Marbury's Ducks and all three have since returned to NBA careers.

"Steph, I think he still could play in the NBA, but he has already done that part for his career," said Morris, who has averaged 23 points and 10 rebounds for Beijing.

"For him he wants to grow more over here, he is trying to branch out and teach more people what he knows about the game. That is what his vision is, it is a very positive thing."

And what does Marbury think of Jeremy Lin?

"Lin-sanity has been good for the hype for the NBA, especially with all that went on this year with the (contract) lock-out," he said.

"(NBA commissioner) David Stern is doing a great job of pushing it, pushing the media toward a kid from Asia, knowing that Asia is one of the biggest markets in the world."

The CBA semis begin Sunday, with Beijing meeting Shanxi while reigning champions Guangdong will face either Xinjiang or Dongguan.