1053 GMT: Alonso and Perez embrace and take the applause of Sepang after a highly eventful race that looked unlikely to even finish at one stage after heavy rain stopped the action on lap nine. 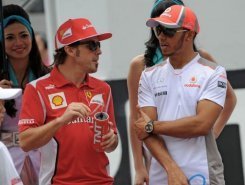 1050 GMT: Alonso pumps his fists as he comes home in first place. Sergio Perez is a surprise second in a Sauber and Lewis Hamilton is third for a second week running after starting on pole.

LAP 51/56: Just as Sergio Perez had got within 0.5secs of leader Fernando Alonso, the young Mexican loses it on a corner. He recovers but his chances of winning look gone now.

LAP 49/56: The usually smiling Sebastian Vettel is left furious after a small bump with an HRT blows a back tyre. The world champion plummets from eighth to 12th.

LAP 47/56: Alonso's lead is down to 2.9secs. The Sauber team tells second-placed Perez: "You are doing very well. You are very quick."

LAP 45/56: AFP reporter Julia Zappei tells me that the Malaysian king has just left, just as the race approaches its climax. Perez is closing on Alonso.

LAP 43/56: After a final round of pit stops, Alonso, who briefly lost the lead to Perez, is back at the front, 5,7sec ahead of the Mexican. Hamilton is in third. It looks like that rain is not coming.

LAP 41/56: Alonso pits to put on slicks, returning to the action in third.

LAP 38/56: Perez is hunting down leader Alonso. The Sauber driver has just delivered the fastest lap of the race and is only 2.3secs off Alonso now -- and closing fast.

LAP 36/56: "It's close, it's coming slowly," the Red Bull team tell Mark Webber, in sixth, of a horrible big cloud that is hanging ominously over Sepang.

LAP 34/56: Nobody predicted this: Fernando Alonso in a Ferrari that was written off as largely undriveable leads, ahead of Sergio Perez in a Sauber. The Mexican is 5.6secs behind and closing -- slowly.

LAP 33/56: AFP reporters tell me that it is dry now but another threatening black cloud is rolling in. This presents a real dilemma for the drivers in terms of pitting.

LAP 31/56: Another great champion, Michael Schumacher, has just been overtaken by Kamui Kobayashi in a Sauber. The German slips to 12th at the expense of the Japanese.

LAP 29/56: The midfield is really packed. And what of Jenson Button, one of the pre-race favourites? He's moving slowly through the field after his prang and is in 18th.

LAP 28/56: It's raining again in what has been a dramatic afternoon near Kuala Lumpur. It is not heavy rain though and hopefully will not see another stoppage.

LAP 26/56: Sergio Perez, in his Sauber, is closing on race leader Alonso. Perez is 6.257secs behind the Ferrari but has just clocked the quickest lap of the race. Hamilton is third and Vettel fourth.

LAP 24/56: Fernando Alonso is steaming ahead and showing all the qualities of a two-time world champion.

LAP: 22/56: Jenson Button, last week's winner, is in 20th and moving slowly through the field. But he's on the radio to his McLaren team telling them "the front tyres are not working" and he has "no grip" on the back.

LAP 20/56: Fernando Alonso in his much-criticised Ferrari is leading and pulling away from Sergio Perez and Lewis Hamilton. And, best of all, it's dry.

LAP 18/56: Jenson Button is languishing down in 22nd after he wasted 30 seconds in the pit having a new front wing attached after a collision.

LAP 16/56: Alonso is the new race leader, followed by Hamilton and Perez.

LAP 15/56: It's all happening here. Hamilton pits but he loses a precious free seconds there as he inexplicably fails to immediately pull away.

LAP: 14/56: Several cars dive immediately into the pits to change tyres as soon as the safety car makes way. So where are we? Hamilton still leads, followed by Button, Perez, Webber and Alonso.

LAP 11/56: Jenson Button is obviously keen to know the weather report and has been asking the pit to keep him informed. "We expect the rain to clear for the rest of the race," McLaren tell him. Great news.

LAP 10/56: The cars are out behind the safety car. The weather forecast does not look too bad from here on. Fingers crossed.

0907 GMT: So finally we are gearing up to get going again soon. The drivers are getting ready for the re-start. To recap: Hamilton leads from Button after nine of 56 laps at a soggy Sepang. They will start behind a safety car for an indefinite period.

0903 GMT: As the good news filters through that we are back in business in less than 15 minutes, two-time world champion Fernando Alonso, who is surprisingly short, whispers a little something in the ear of Aussie Mark Webber.

0856 GMT: Michael Schumacher, who lost his third place on the grid after spinning early on and sits in 15th, takes cover under a black umbrella but does not seem too downbeat and gives a cheery wave to the grandstand, who are still in good heart, it seems.

0852 GMT: A little good news -- it seems to be clearing up and there is even the hint of blue sky on the horizon.

0849 GMT: Sauber's Japanese driver Kamui Kobayashi looks especially unimpressed by this long stoppage for rain after just nine laps. He looks for all the world like a man who has been waiting too long for a bus that just won't come.

0844 GMT: This stoppage for rain is sure to revive more fierce debate about the Malaysian GP and the timing of it. F1 fans will remember that this is by no means the first time this has happened at Sepang. Everyone looks utterly fed-up.

0839 GMT: Zappei has got her eyes on the paddock, where she says Caterham team staff have been rushing to move tyres to the pit lane as the rain drives on.

0835 GMT: It's hard not to feel very sorry for the fans that have packed out Sepang. Spare a thought, especially, for our friend Baipusi Gulubane, who told AFP reporter Julia Zappei that he had come all the way from Botswana with his young family to see some F1 live for the first time.

0830 GMT: For fear of becoming boring, the rain is pelting it down at Sepang, where the Malaysian GP is, sort of, happening. We got to lap nine but the rain got harder and now it's torrential.

RED FLAG: AFP reporter Julia Zappei tells me that there is thunder and lightning over Sepang.

LAP 9/56: RED FLAG. The race has been stopped. That's not the same as cancelled. It will, in theory, restart.

LAP 6/56: The safety car is out. Race control deem it too dangerous to race because of the wet weather. Conditions are incredibly tricky. It is likely to fuel more discussion about staging this race at a time of day when, for some reason, it always rains at Sepang. You can set your watch by it.

LAP 5/56: Hamilton pits to put on wet-weather tyres, as do Vettel and Webber. Hamilton just holds onto the lead from fellow Briton and McLaren Button. They are all on full wets.

LAP 4/56: AFP reporter Julia Zappei says that there is a lot of standing water on the Sepang circuit, with the cars throwing up the water as they whiz around the notoriously bumpy track.

LAP 2/56: Hamilton and Button are out in front, with Mark Webber in third in his Red Bull, with team-mate Vettel next and Alonso fifth. Schumey is down in 13th.

LAP1/56: Lewis Hamilton manages what he failed to do last week and holds on to his lead from pole, from fellow McLaren Jenson Button. The big loser in Schumacher, who started third but spun. He is still in the race, but well down the field.

0800 GMT: The cars are lining up now on the grid. Fasten your seatbelts, folks, we're nearly ready to go. With the weather so unpredictable, anything can happen here.

0757 GMT: For fear of sounding increasingly like a weather forecaster, the rain is light and the drivers appear to be going for intermediate tyres.

0753 GMT: To remind you: The Red Bull of Aussie Mark Webber is on the second row with the German, with reigning world champion Sebastian Vettel with Romain Grosjean on the third row. Nico Rosberg and Fernando Alonso are up next.

0748 GMT: All stand to attention as the rather catchy Malaysian national anthem rings across Sepang. The brollies are up, though. It's hot. And wet.

0745 GMT: Oh dear. With about 15 minutes till the big off, the rain is falling. Harris says cloudburst could make all the difference this afternoon, especially with wet-weather specialist Michael Schumacher starting from third as he seeks his first podium since returning from retirement.

0739 GMT: Zappei has been out and about meeting F1 fans from all over the world at Sepang, including Baipusi Gulubane, a 46-year-old orthodontist from Botswana, who says he travelled to Malaysia with his three young children to see what the F1 is like live. "This is once in a lifetime. before I die I must see it live," he says.

0737 GMT: AFP's Asia sports editor, Talek Harris, tells me between mouthfuls that Lotus have just handed out ice creams to all journalists in the busy press room courtesy of "Ice Man" Kimi Raikkonen. Ironically, Harris says, air-conditioners are on full blast in the media room, where it is freezing. However, the ice creams were delicious, he reassures me.

0734 GMT: Plenty of the pre-race talk has focused on the notoriously temperamental weather at Sepang, where AFP reporter Julia Zappei says it's over 30 degrees C (that's 86F) and unfortunately, increasingly overcast. But that's nothing: the track temperature is expected to be up to 50C.

0732 GMT: It's just under 30 minutes until the action gets under way at Sepang, where Lewis Hamilton will be desperate to win after his disappointing finish, in third, in last week's opening race in Melbourne.

WELCOME TO OUR LIVE TEXT COVERAGE of the Malaysian Grand Prix, from Sepang, where Lewis Hamilton starts in pole, alongside fellow Briton and McLaren driver Jenson Button.