Viktor Bout gets 25 years in prison

Russian arms dealer Viktor Bout was sentenced Thursday (US time) to 25 years in maximum security prison by a federal judge in New York.

His 25-year sentence was the minimum on his four convictions. He faced the possibility of life in prison. Bout is 45, so unless he gets an early parole he could be 70 when he is released. 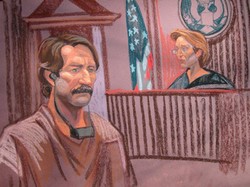 The sentencing was delayed twice, as Bout's lawyer demanded more time to prepare his request for leniency and accused prosecutors of "outrageous government conduct" in allegedly entrapping Bout.

The Russian supposedly sold arms to despots and insurgency groups embroiled in some of the world's bloodiest conflicts and was the inspiration for the arms smuggler played by Nicolas Cage in the movie "Lord of War" (2005).

But in 2008, Bout was lured to Thailand and met at a Siam Square hotel with US agents he believed were from the Colombian terrorist group, the Revolutionary Armed Forces of Colombia (Farc).

He was convicted on four counts of conspiracy to kill Americans, acquire and export anti-aircraft missiles, and provide material support to a terrorist organization.

US agents testified he offered to sell them "without hesitation and with frightening speed ... a breathtaking arsenal of weapons," including hundreds of surface-to-air missiles, machine guns and sniper rifles along with 10 million rounds of ammunition.

It was no surprise that his lawyers disagreed, and tried to picture the US government sting operation as misguided, zealous entrapment.

"The relentless pursuit of Viktor Bout and the abominable design to create a criminal case against him that brings him before this court for sentencing is the product of malice and object of private politics stemming from the then White House," defense attorney Albert Dayan wrote in a letter to the judge.

Bout, he said, only wanted to sell two cargo planes to the terrorists.

In the lawyer's version of events, the US government conspired to get even with Bout to avenge the embarrassing revelation that US military contractors had arranged in late 2003 with Bout-owned or Bout-controlled companies to deliver tents, food and other supplies for US firms working for the US military in Iraq.

In a recent interview with a Russian radio station, Bout continued to maintain his innocence and said the US wasn't looking for the truth in his case.

"Some American arms smugglers are even more guilty but they enjoy freedom," Bout said Wednesday, The Voice of Russia reported.

According to his lawyer, Bout is a political prisoner. But even Dayan admitted Bout was something less than a model citizen.

"I do not profess, I do not argue that he's an angel but he is innocent of these charges," wrote Dayan in his letter to the judge. "I felt it was my duty to speak out and let the world know."

The government will sell 60 billion baht of government savings bonds next month to help finance stimulus measures to mitigate the impact of its latest coronavirus outbreak, the finance ministry said in a statement on Monday.