The Church of Scientology has remained tight-lipped about Tom Cruise's shock divorce, grappling with a PR blow which has revived questions about the controversial celebrity-friendly religion. 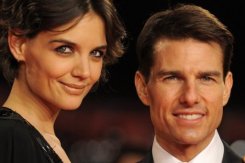 Tom Cruise and Katie Holmes are shown in Berlin in 2009. The Church of Scientology has remained tight-lipped about Cruise's shock divorce from Holmes, grappling with a PR blow which has revived questions about the controversial celebrity-friendly religion.

The Church has made barely a single comment since Katie Holmes dropped her June 28 bombshell on the Hollywood A-lister, probably the most high-profile member of the nearly six-decade old organization.

Cruise's representatives have been more forthcoming -- and lashed out this week at the tabloid National Enquirer over a story describing the "Mission Impossible" actor as a "monster."

But the publicity blitz around the story has also shed an unfavorable light on the Church, which has long battled with a controversial image, fueled by criticism including from former members.

"It's a terrible public relations situation for the Church," said Karen Pressley, former "commanding officer" of the Scientology Celebrity Centre -- the very name of which raises eyebrows to LA newcomers -- based in Hollywood.

"This is now his third marriage as Scientologist and my observation is, what does it says about Tom Cruise's ability to succeed in relationships?" she asked rhetorically, in an interview with AFP.

She added: "He goes to the media and speaks to people like (talk show hosts) Oprah (Winfrey) and Matt Lauer and say 'We are the only ones that can help when people has troubles, we have the answers of everything.'

"And what does it say about his ability to apply Scientology to relationships? To marriage and to raising a family?" said Pressley, who has lived in Atlanta since "escaping" in 1997 after 16 years in the Church.

Cruise is probably the biggest Scientologist celebrity, but not the only one: John Travolta is also a member, as are the musician Beck and actresses Juliette Lewis and Mimi Rogers -- Cruise's first wife.

The star was reportedly taken totally by surprise when Holmes announced she was filing for divorce to end their five-year marriage, which began in fairytale fashion after he proposed under the Eiffel Tower in Paris.

Speculation immediately focused on reports that the actress was concerned that Cruise wanted to draw their 6-year-old daughter Suri further into the Church.

In a rare comment on the story a lawyer for the Scientologists, Gary Soter, denied reports that the Church had organized for Holmes to be tailed with her daughter in New York.

"There is no truth whatsoever to the TMZ.com report (or any other report) that the Church of Scientology has sent anyone to follow or surveil Katie Holmes," he said in an emailed statement.

Church spokespeople have not responded to repeated requests for comment on the divorce, and Soter justified that policy in a new email Friday -- and blasted ex-Scientologists including Pressley for criticising the organization.

"The Church is not giving any interviews or making any statements about the divorce, as it would be inappropriate to do so," he said.

"The Church declines to respond to the self-promoting opinions of this anti-Scientologist who has no personal knowledge of the facts and who is seeking to exploit a private family matter," he added.

While the church has remained low-key, Cruise's lawyers have threatened to sue the National Enquirer over a story which ran under the front-page headline "Inside Tom's House of Horrors."

"Mr. Cruise is certainly not a 'monster.' He is a caring father, a hardworking actor and, above all, an honest, decent man," wrote Cruise lawyer Bert Fields, in a letter cited by the Hollywood Reporter.

The actor, filming in Iceland when the story broke, has kept a low profile since, reportedly returning to Los Angeles to celebrate his 50th birthday this week, while Holmes, 33, has already launched a new life in New York.

The ex-couple's lawyers meanwhile managed to negotiate a divorce settlement in less than two weeks -- a stunningly short time frame which, observers say, partly reflects a desire to minimize bad publicity for the Church.

But that hasn't stopped a stream of ex Church members from coming forward to denounce it -- including Jenna Miscavige, embarrassingly a niece of the Church's chief David Miscavige, who took over after founder L Ron Hubbard died in 1986.

Miscavige, who left the Church in 2005, published a statement online supporting Holmes.

"As a mother myself, I offer my support to Katie and wish for her all the strength she will need to do what is best for her and her daughter," she wrote on a website for ex scientologists, www.exscientologykids.com.

"My experience in growing up in Scientology is that it is both mentally and at times physically abusive ... I was allowed to see my parents only once a week at best -- sometimes not for years.

Founded in 1954 by US science fiction writer Hubbard, the Church of Scientology is recognised as a religion in the United States. It claims a worldwide membership of 12 million.

But it has long been controversial, notably in Europe. In France it was convicted of fraud in 2009 and fined hundreds of thousands of euros for fleecing vulnerable followers. The conviction was upheld this year.

Scientology offers spiritual rehabilitation for its followers through a form of counseling called "auditing." In Hollywood, tourists are offered free tests to introduce them, including at an imposing blue Church on Sunset Boulevard.

Once they have joined, members can pay tens of thousands of dollars to attain higher levels of enlightenment, including a state of "Clear," on the way to personal salvation.

The first stage costs only about $100, Pressley explained, but to reach the highest level the average cost is at least $300,000.

Those without enough money can work for the Church, she said, but added: "People like Tom Cruise and Katie Holmes, they are private paying customers (so) they live independently in their homes and raise their families."

Biden announces $1.75 trillion US spending deal ahead of Europe trip

Filipinos flock to cemeteries ahead of All Saints' Day closure