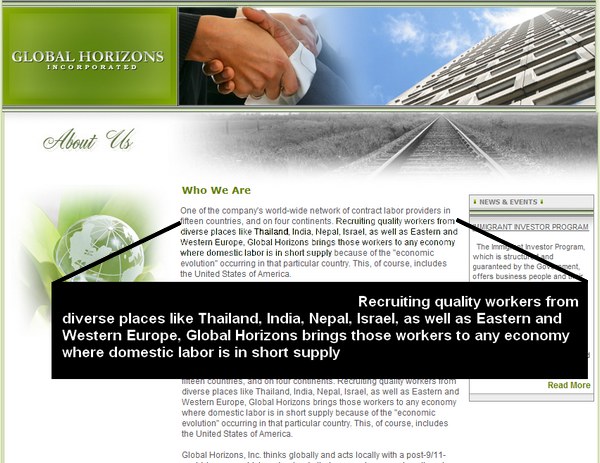 There is no chance it will renew criminal charges in a case that accused the company of massive cheating, mistreatment, misrepresentation and physical threats. If any of that happened to at least 600 Thai workers, it never will be prosecuted in criminal court, and no one involved will be punished.

"A team of attorneys and agents determined the government is unable to prove the elements of the charged offenses beyond a reasonable doubt, the high standard applied in criminal prosecutions, and that proceeding with the prosecution no longer serves the public interest," Ms Chitre said in the media release.

"The dismissal is based on facts and circumstances specific to this case, applies to the criminal prosecution only, and does not apply to any ongoing civil litigation being conducted by the Equal Employment Opportunity Commission (EEOC)."

Translation: The allegedly mistreated Thai labourers can continue to try to recover losses and damages through civil courts, but the government will not help by pursuing criminal charges. 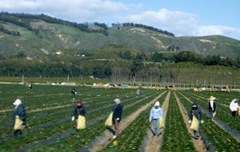 The Associated Press quoted Michael Green, Global Horizons' attorney in Honolulu, as calling the dismissal of criminal charges a "moral victory" but said it doesn't take away all the time, money and emotional toll of fighting the charges.

"To dismiss a case with no intention of bringing it back as a new indictment is very unusual," Green  "You never see the government just walk away from a case that they spent millions of dollars on."

Never say "never", since that is exactly what the US government has done in this case.

The EEOC has sued Global Horizons and several farms in California and Washington state for allegedly abusing hundreds of workers taken from Thailand to the US "on the promise of high-paying wages and temporary visas," only to be "forced into vermin-ridden housing, denied the opportunity to leave the premises and subjected to harassment, including physical assault by their overseers."

"Thai workers were forced to live in dilapidated housing infested with rats and insects, with dozens sleeping in the same room, many with no beds," according to a press release still displayed on the EEOC website.

The US government originally alleged that between 2003 and 2007, Global Horizons promised hundreds of workers lucrative jobs in the United States, and then charged the workers exorbitant recruitment fees that they were expected to work to pay off. In some cases, according the lawsuit, the workers owed tens of thousands of dollars.

The US government had charged Global Horizons President Mordechai Orian, an Israeli national, Pranee Tubchumpol, director of international relations, Shane Germann and Sam Wongsesanit, all of Global Horizons Manpower in the US. Thai labour recruiters Ratawan Chunharutai and Podjanee Sinchai of Thailand were also charged with engaging in conspiracy to commit forced labour, the FBI said.

If convicted, Mr Orian and Ms Pranee faced 70 years in prison. Testimony against them was disclosed as long ago as September, 2010.

"I did not earn 70-80,000 baht (about $2,340 to $2,680) per month while working on the farm, as the recruiters had promised," said one Thai man, identified as "Ken," in a statement provided by the Thai Community Development Center, which filed the original complaint with the Equal Employment Opportunity Commission.

The men were brought to the United States under a special US federal visa programme called the H2-A system, which places foreign workers on US farms.

But once the men arrived, the US government once charged, their passports were confiscated and they were not paid for their work. It also alleged that many of the workers were barred from leaving the farms and were forced to live in cramped, dirty conditions.

In many cases, the Thai workers were threatened with deportation if they complained about the conditions, the lawsuit said.

None of those charges will be prosecuted. Nor will other allegations be heard in a criminal court.

"Some were left without water. Others were given inadequate food to eat," said EEOC attorney Anna Y. Park, who filed the original lawsuit against Global Horizons Manpower and the farms. "In some cases, bodyguards were stationed around the farms so they could not escape."

The government also charged - but now has withdrawn the allegations - that Thai workers endured screaming, threats and physical assaults by their supervisors and were threatened with deportation if they complained. 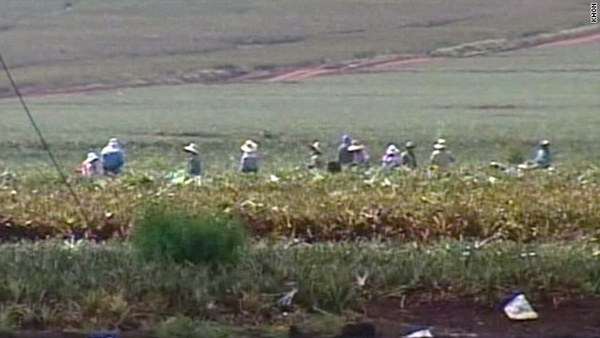 Thai workers on a farm in Washington state. The US government has dropped charges that they were victims of human trafficking.