Germany is heading for recession, economists warned on Monday as the eurozone crisis pushed down business confidence in the country, Europe's top economy, to the lowest level since February 2010. 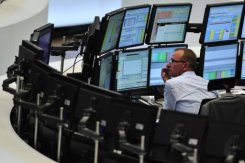 A trader sits in front of screens showing the German DAX index in Frankfurt in 2011. The eurozone crisis is increasingly hitting the German economy, the leader in Europe, data suggested on Monday as German business confidence fell for the fifth month in a row to the lowest level since February 2010.

The Ifo institute said its closely watched survey of the business climate in Germany dropped unexpectedly in September for the fifth month running to 101.4 points from 102.3 points in August.

Analysts surveyed by Dow Jones Newswires had expected an unchanged reading, hoping businesses would be more bullish after the European Central Bank announced unprecedented action earlier this month to stem the eurozone crisis.

"The headwinds on the German economy continue to prevail," he added.

The disappointing data were "a reminder that even the eurozone's strongest economies are suffering from a serious economic downturn," judged Jennifer McKeown, an analyst at Capital Economics.

"In all ... it seems like only a matter of time before the economy starts to contract. This will make support for the peripheral economies even more difficult to muster," she added.

ING bank economist Carsten Brzeski said the figures "confirm our view that the German economy could see a contraction in the third quarter."

However, he saw only a short-term dip.

"In the short run, a stronger euro and somewhat higher interest rates should dampen German growth but in the long run the positive impact from a stabilised eurozone should prevail," said the analyst.

Ifo calculates its headline index on the basis of companies' assessments of their current business situation and the outlook for the next six months.

The disappointing data weighed heavily on the markets, with all major European stock exchanges in the red and the euro plunging on the foreign exchange market.

Unlike many of its neighbours, Germany has shown strong resistance to the debt crisis that has swept through the 17-country bloc, relying on its powerful export motor to keep the economy humming.

It notched up modest growth of 0.3 percent in the second quarter while the eurozone as a whole contracted by 0.2 percent.

But even the German powerhouse has been unable to resist forever and a raft of economic data recently has suggested the economy is beginning to falter.

The economy ministry said in its latest report earlier this month that, while they expected a "fairly stable development" in the second half of the year, there was "no reason to sound the all-clear", noting "downside risks."

New car registrations, a key indicator of demand in Germany, tumbled sharply in August, while the most recent retail sales figures also declined. Consumer confidence has stagnated as well.

As the economy hits headwinds from the crisis, unemployment is beginning to rise -- admittedly from its lowest level since Germany was reunited more than two decades ago.

Latest data showed the total number of people out of work rose by 29,100 in August from July to stand at 2.91 million.

Economists fear that consumption and domestic demand could begin to run out of steam as several companies -- including carmaker Opel -- introduce short-time working schemes to cut costs.