China has reshuffled its military top brass in a move analysts said on Monday was probably aimed at ensuring President Hu Jintao remains commander in chief of the military after a 10-yearly leadership change. 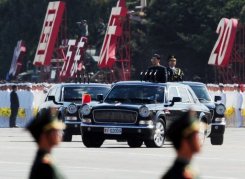 This file photo shows Chinese President Hu Jintao reviewing the PLA troops prior to the start of the National Day parade at Tiananmen Square in Beijing, in 2009. China has reshuffled its military top brass in a move analysts said on Monday was probably aimed at ensuring Hu remains commander in chief of the military after a 10-yearly leadership change.

Hu, the CMC chairman, is slated to step down as head of the ruling party at a congress starting this week and will retire as national president in March as part of China's once-a-decade leadership change.

But Willy Lam, a China politics expert at the Chinese University of Hong Kong, said: "As long as he is the CMC chief, he will still be the power behind the throne."

"Hu Jintao would want to serve another five years, particularly given the fact that he has to watch over his political proteges... and protect his political legacy."

Hu took over control of the party from Jiang Zemin in 2002 but, as part of China's opaque and secretive political process, only succeeded him as CMC chairman in 2004.

Unlike most modern states, China's 2.3 million-strong military -- the world's biggest -- is directly run by the ruling Communist Party, not by the government, an arrangement that stems from the revolution that brought the party to power in 1949.

The late revolutionary leader Mao Zedong -- who said that "power comes from the barrel of the gun" -- used the People's Liberation Army not only to advance revolution, but also to protect the party's political power, Lam said.

The two incoming CMC vice chairmen will be tasked with pushing forward the modernisation of China's military and overseeing an increasingly powerful arsenal.

Xu is the first air force general to become a vice chairman of the committee, reflecting the importance China places on quickly developing its air capability.