China has passed a new law stipulating that family members should pay regular visits to their elderly relatives, according to the government's official website. 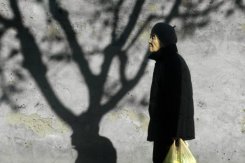 An elderly woman is pictured in Beijing, on November 26, 2012. China has passed a new law stipulating that family members should pay regular visits to their elderly relatives, according to the government's official website.

The ruling, approved by China's National People's Congress on Friday, is part of a package of amendments to the Protection of the Rights and Interests of the Elderly legislation and will come into force on July 1, 2013.

"Family members who live separately from the elderly should visit them often," the law says, adding that "employers should guarantee the right to home leave in accordance with relevant regulations".

The law mentions no specific penalties for those who fail to visit frequently, nor elaborates on what "often" means.

But it does state that if the rights and interests of the elderly are violated, they or someone on their behalf can seek official help or file a lawsuit.

The wide-ranging law includes clauses covering intra-family conflicts regarding support obligations, housing and assets. It stipulates punishments for people who abuse the elderly, fail to support them and interfere in their freedom to marry.

The legal changes reflect the challenge China faces in dealing with an increasingly ageing society after three decades of limiting couples to a single child.

The official Xinhua news agency said Friday that the law was amended "amid government efforts to find comprehensive solutions to issues facing the elderly population, as the number of Chinese senior citizens has grown rapidly in recent years".

At the end of 2011, there were more than 184 million people above the age of 60, Xinhua said, citing official figures, accounting for 13.7 percent of the population.

Legislator Yu Jianwei told reporters that China's elderly population is expected to exceed 200 million in 2013, according to Xinhua.

The United Nations estimates that that by 2050 some 30 percent of Chinese will be 60 or over, versus 20 percent worldwide and 10 percent in China in 2000.

England get the job done with 1-0 win over Czechs

LONDON: England delivered an efficient but hardly scintillating display to beat Czech Republic 1-0 with an early Raheem Sterling header on Tuesday to advance to Euro 2020's last 16 as Group D winners, with the Czechs through as one of the best third-placed teams.

GLASGOW: An inspired Luka Modric curled home a magnificent finish as Croatia shrugged off a slow start to Euro 2020 to beat Scotland 3-1 on Tuesday and reach the last 16 in style, leaving their opponents again on the tournament scrap-heap.