Dutch Finance Minister Jeroen Dijsselbloem on Thursday announced his candidacy to become the next head of the Eurogroup of eurozone finance ministers. 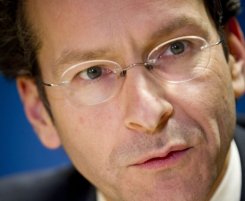 A photo taken on November 27, 2012 in The Hague shows Dutch Finance Minister Jeroen Dijsselbloem. Dijsselbloem announced his candidacy as the next head of the Eurogroup of eurozone finance ministers.

"I want to tell you that... I will tomorrow present my official candidacy," during talks with the current head, Luxembourg Prime Minister Jean-Claude Juncker, Dijsselbloem told parliament.

The finance minister, from the PvdA Labour party, has emerged in recent weeks as a frontrunner for the job of coordinating eurozone finance ministers, but had not officially announced his candidacy.

Dijsselbloem, 46, has barely two months of ministerial experience and little is known of his vision for the future of the 17-nation currency union.

He could nonetheless be named as head of the Eurogroup when it next meets, on Monday, although France still appeared reluctant to back his appointment.

"The importance of the Eurogroup as a platform for the European economy is so great," Dijsselbloem said.

"I ask for your trust in backing this candidacy," he said during a debate including on how he would combine his current ministerial job with that at the head of the Eurogroup.

Dijsselbloem's chances for the job had appeared to have faltered when French Finance Minister Pierre Moscovici told the Frankfurter Allgemeine Zeitung website that the Dutchman had not yet adequately put forward his vision for the eurozone.

Moscovici later urged in Paris that the Eurogroup not rush into appointing a new chief at their next meeting, calling for the selection procedure to last "several weeks".

Dijsselbloem is to outline his vision of the Eurogroup on Monday.

"It won't be a new vision for the eurozone but my views on the Eurogroup, it's functioning and its agenda," Dijsselbloem said.

"I will stress the importance of the Eurogroup. Obviously we must continue to develop the means to manage the crisis but also develop and expand European economic cooperation, strengthen the European economy."

Dijsselbloem stressed that his candidacy was also in the Netherlands' interests, which he would continue to defend in his new job.

Dijsselbloem emerged as a compromise candidate for the eurozone job because he comes from one of the few remaining top AAA-rated countries, which is also a founding EU member, he is Social Democrat like the government in France, and backs austerity like Germany.

Juncker, who has piloted the eurozone finance ministers group since 2005 and led debt crisis response efforts, said Wednesday he would meet Dijsselbloem to go over "the preparation of the next Eurogroup meeting," in Brussels.

A statement from Juncker's office said the pair would "take stock of the financial and economic situation in the eurozone," but the timing of the meeting suggested that the long-expected passing of the baton was now almost settled.

Juncker tried to leave last July but was persuaded to stay on by Germany and France after the eurozone's two biggest economies failed to agree on a replacement.

Juncker has led the Eurogroup even while serving as Luxembourg prime minister, but earlier this month he insisted that he had made an "irrevocable" decision to step down as steward of the eurozone this month.