US consumer confidence down sharply in January
World

US consumer confidence down sharply in January

US consumer confidence dove sharply for the second straight month in January, the Conference Board said Tuesday, with rising taxes cited as a likely reason for the surge in gloom. 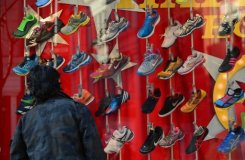 A man looks at running shoes on display at a shoe store in New York, January 8, 2013. US consumer confidence fell sharply for the second straight month in January, the Conference Board said Tuesday, dropping below where it was a year earlier.

The January level was also below where the index stood in January 2012, as readings on consumer views of the current situation and the outlook both diminished. It was the third consecutive monthly decline in confidence.

"Consumer confidence posted another sharp decline in January, erasing all of the gains made through 2012," said the Conference Board's Lynn Franco.

"Consumers are more pessimistic about the economic outlook and, in particular, their financial situation," she said in a statement.

"The increase in the payroll tax has undoubtedly dampened consumers' spirits and it may take a while for confidence to rebound."