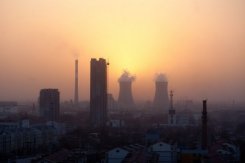 Incoming FDI, which excludes financial sectors, stood at $17.48 billion over the period, the commerce ministry said, down 1.35 percent year-on-year.

Beijing is keen to promote overseas investment in part of its efforts to reform China's growth model and acquire significant foreign assets in sectors such as energy, mining and high-tech industries, analysts said.

"It should be a trend in the long run -- it is highly likely that overseas direct investment will exceed foreign direct investment in the next few years," Ren Xianfang, a Beijing-based analyst with research firm IHS Global Insight, told AFP.

"It is a national strategy to transfer China to a big investor from a big exporter."

The biggest rise in Chinese investment in a major market over January and February was in Australia, where it surged 282 percent, the ministry said.

However, in Japan, with whom Beijing has been involved in a territorial row, investment was down 31 percent. Overseas FDI to Russia also slipped 46 percent.

At the same time China's manufacturing competitiveness faces rising costs, while investor confidence is battered by weakness in the global economy.

EU investment into China increased "quite rapidly" in the first two months of the year, the ministry said in a statement, rising 34.01 percent to $1.214 billion.

But FDI fell from the US and Asia, with Japanese investment down 6.7 percent over the period to $1.269 billion.

China's economy grew at its slowest pace in 13 years in 2012, expanding 7.8 percent from the year before.

But it has been showing renewed vigour, with GDP growth accelerating in the final three months of 2012 to 7.9 percent, snapping seven straight quarters of weakening expansion.

Month-to-month comparisons at the start of the year in China can be heavily affected by seasonal factors as China's annual Lunar New Year holiday can fall in either January or February.

China takes a week off during the break, the country's biggest, as hundreds of millions of people travel back to their hometowns for celebrations.

FIFA officially advances World Cup by a day for Qatar

France gets help from EU neighbours as wildfires rage