Islamist attackers in Niger not from Libya: PM
World

Islamist attackers in Niger not from Libya: PM

The Islamists who carried out two attacks last week in Niger which killed 38 people did not come from Libya, as charged by the Niger authorities, Libyan Prime Minister Ali Zeidan said Monday. 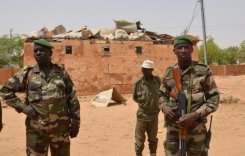 Nigerien soldiers stand near a damaged building in an army base in Agadez, northern Niger on May 26, 2013. The Islamists who carried out two attacks last week in Niger which killed 38 people did not come from Libya, as charged by the Niger authorities, Libyan Prime Minister Ali Zeidan said Monday.

Such allegations "are without basis," Zeidan said after meeting EU President Herman Van Rompuy in Brussels.

"It was (former dictator Moamer) Khadafi who exported terrorism," Zeidan said, insisting: "The new Libya will not tolerate that."

Niger President Mahamadou Issoufou said Monday that the attackers who bombed an army base and French-run uranium mine entered the country from southern Libya, where he warned further attacks were being planned on Chad.

Two Islamist groups claimed Thursday's attacks in northern Niger, calling them retaliation for the country sending troops to help a French-led campaign against Al Qaeda-linked insurgents in Mali, in which Chad is also involved.

Prime Minister Zeidan also called on Niger to hand over Saadi Khadafi, one of the former dictator's sons, and other officials who he said had sought asylum in the west African country.

Zeidan told Van Rompuy that Libya was determined to break with the past and would do its utmost to police its borders.

Van Rompuy said he had told Zeidan that Libya had the EU's full support as it built a society based on human rights and democracy.

"I have also expressed the EU concerns at recent events, including the attack on the French Embassy in April, that expose the serious security challenges that Libya is facing today," Van Rompuy said, adding that the prime minister had assured him steps were being taken to improve security.