The US National Security Agency uses computer servers in Thailand to help run a massive networked collection of information about internet users, and to store and analyse the data. 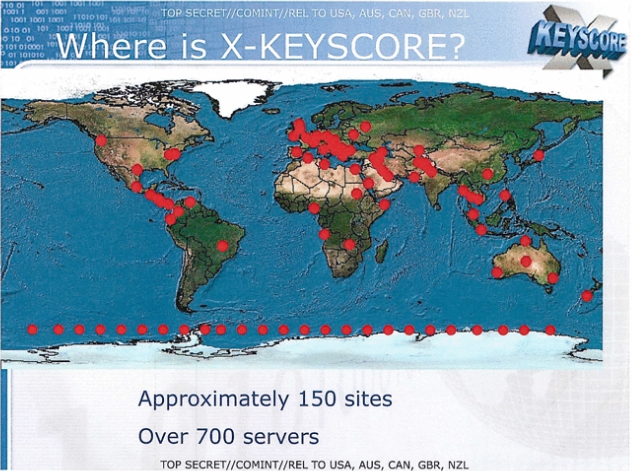 This is one of a 32-slide presentation taken from secret NSA servers by the fugitive Edward Snowden and published Thursday in the British newspaper The Guardian.

According to secret information leaked by Mr Snowden through The Guardian newspaper, XKeyscore is a massive programme that sweeps up email, social media activity and all browsing history.

The data, according to NSA slides detailing the programme, is analysed, sifted and stored on servers around the world - more than 700 servers at approximately 150 sites, as the "top secret" slide states.

A small-scale world map locates the sites with the use of red dots (see slide, above). There are three dots, which may also cover Myanmar, Vietnam or Cambodia. But at least one of the dots sits atop the image of Thailand.

While locating NSA spy technology in Thailand is unsurprising, few details are known. The servers would have to be large computer arrays by definition, but they could be anywhere, from the US Embassy to almost any office building in Bangkok or up-country.

The NSA has a long history of using Thailand in its long-range interception programmes. In the Vietnam war era, the NSA was the agency behind the huge electronic Ramasun spy station south of Udorn Thani.

The secret surveillance system known as XKeyscore, revealed by Mr Snowden and The Guardian on Thursday, allows US intelligence to monitor "nearly everything a typical user does on the Internet," according to the leaked documents.

Citing classified documents provided by the fugitive, the British daily said the programme was the most wide-reaching operated by the NSA.

Russia on Thursday granted Mr Snowden temporary asylum and let him leave the Moscow airport where he had been staying for almost five weeks.

He said that Russian authorities had granted Snowden temporary asylum for one year. TV footage showed Kucherena holding up a copy of a Russian refugee ID with Snowden's photo, name, and an expiry date of July 31, 2014.

The lawyer explained that Mr Snowden's location would not be revealed because of safety concerns. "He is one of the world's most-sought persons," he said. Kucherena said Snowden had left the airport in a taxi.

The Guardian said the existence of XKeyscore proves the truth of Snowden's earlier claim, denied by some US officials, that before he left the NSA he could "wiretap anyone, from you or your accountant, to a federal judge or even the president, if I had a personal email."

The White House insisted, however, that access to such tools is only available to those who are assigned to use them and that multiple "checks and balances" are in place to prevent abuse.

The NSA on Thursday (Thailand time) also refuted as false "the implication" that its information collection is "arbitrary and unconstrained."

On its website, The Guardian published a batch of slides from what appears to be an internal US intelligence training briefing laying out the capabilities of the XKeyscore program.

The paper had blacked out four of the 32 slides because "they reveal details of specific NSA operations," but the remainder of the document lays out the operation of the programme in detail.

The slides are marked "Top Secret" and restricted to authorised personnel from the United States, Britain, Canada, Australia and New Zealand. They were produced in 2007 and not due to be declassified until 2032.

According to the slides, XKeyscore allows US spies to monitor in real time the emails, web browsing, Internet searches, social media use and virtually all online activity of a target.

The system's computer infrastructure is based on a "massive distributed Linux cluster" and has "over 500" servers distributed around the world, including Thailand.

A map included in the briefing suggests that these servers are located on every continent, on the territory of US allies and of rivals like Russia, China and Venezuela.

Where XKeyscore appears to differ from other US surveillance programs that have already been revealed is that it can index and make searchable virtually any online activity.

"No other system performs this on raw unselected bulk traffic," the document boasts.

XKeyscore does not require an intelligence analyst to have a "strong selector" such as an email address to find a target - agents can work back from a general search to find an individual.

The examples it gives are if someone is using an unusual language for his area, such as German in Pakistan, or using Google Maps to scout targets for attack.

The document boasts that XKeyscore has allowed US agents to capture "over 300 terrorists" but pages that apparently relate to specific operations have been redacted by The Guardian.

The slides also say that XKeyscore is being updated to make it more powerful and faster and to broaden the range of data it can search to include, for example, the EXIF data embedded in digital photographs.

The Guardian interviewed Mr Snowden in June, when he was in Hong Kong after fleeing his job at the NSA in Hawaii carrying a trove of top secret files.

The paper did not say why it had not published details of XKeyscore in June, when it revealed the existence of a less capable US surveillance system known as Prism.

But the leak coincided with a hearing of the US Senate judiciary committee at which top intelligence officials are to be grilled by lawmakers concerned that spy agencies have exceeded the law.

The NSA in its statement acknowledged the existence of XKeyscore for the sake of clarification and said it "is used as part of NSA's lawful foreign signals intelligence collection system."

"Public release of this classified material about NSA collection systems, without context, does nothing more than jeopardize sources and methods, and further confuse a very important issue for the country," it added.

It is illegal in the United States for intelligence agencies to monitor US citizens without a court order, but Snowden's leaks have shown that Americans are regularly caught up in monitoring sweeps.

The revelations have also embarrassed Washington abroad, where some have been shocked by the extent of US internet surveillance.