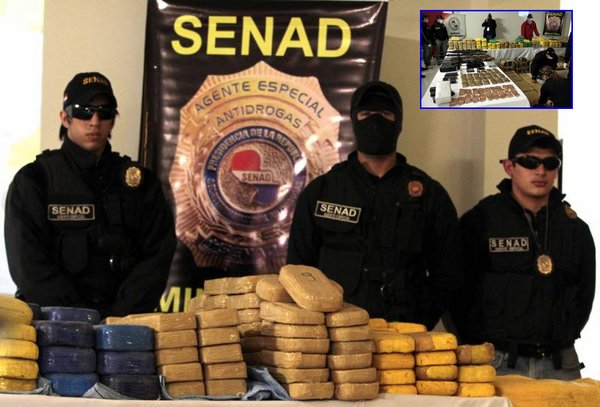 Paraguayan police display part of the overall stash (inset) of 1.8 tonnes of cocaine and numerous arms from Bolivia and Peru. The drugs and arms were seized in the arrest of five people on Aug 23 in Asuncion. (EPA photo)

Falling demand in the United States is driving the criminal gangs to look for new markets, US Assistant Secretary for International Narcotics and Law Enforcement Affairs William Brownfield told a news conference in Manila.

"As the United States is increasingly successful in interrupting the flow of cocaine and methamphetamines from South America... these drug trafficking organisations will look for new markets, and some of those new markets will be in East Asia," Brownfield said.

Mr Brownfield was in Manila on Wednesday on the first leg of a 10-day, Asian tour to promote counter-narcotics, anti-corruption and human rights efforts. He flew to Myanmar Wednesday evening and is due in Thailand on Thursday. He will visit Japan on his way home.

US anti-narcotics official William Brownfield last visited in Thailand in September, 2011, when he paid a courtesy call on Foreign Minister Surapong Tovichakchaikul. (Photo by Ministry of Foreign Affairs)

Cocaine consumption in the United States had dropped by more than 40 per cent over the past six years, he said. At the same time, cocaine prices in Europe and East Asia have risen.

While methamphetamines are also manufactured by Asian gangs, especially in Myanmar, Mr Brownfield said coca leaves, the raw material for cocaine, are grown almost entirely in Bolivia, Peru and Colombia.

He said the US was stepping up cooperation with the Philippines, which was both a market and transit point for drugs and sat "at the opening to East Asia for a trafficking organisation in Latin America".

"As trafficking organisations for heroin in Afghanistan and Myanmar search for new markets in the United States, the Philippines will be at the point of exit across the Pacific," Brownfield added.

Philippine anti-narcotics chief Arturo Cacdac said investigators were looking into the "Mexican" links of a Chinese gang arrested while allegedly manufacturing methamphetamine hydrochloride in one of the Philippines' poshest housing enclaves in January last year.

"It's possible that Latin American drug personalities are looking to the Far East as a market for drugs, not necessarily cocaine but also shabu," he said, using the local name for methamphetamines.

The 1,800-member Philippine Drug Enforcement Agency has seized about 500 kilogrammes (1,100 pounds) of illegal drugs this year, he added.