Americans are fed up with political deadlock, shutdown
World

Americans are fed up with political deadlock, shutdown

Americans are fed up with the political deadlock in Washington and frustrated with how the federal government shutdown is interfering with everything from hunting season to weddings and even military funerals. 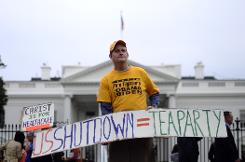 A supporter of US President Barack Obama displays a placard in front of the White House, in Washington, DC, on October 8, 2013

The congressional approval rating dropped to 11 percent in a Gallup poll published Monday -- just one point away from an all-time low hit last year.

A whopping 70 percent of those surveyed by Gallup in the first few days of the budget impasse said the shutdown was a "major" problem or crisis, significantly higher than the 56 percent who thought so at the height of the last government shutdown in 1995.

With no end in sight as the shutdown drags into its second week, the media is rife with stories of people impacted by the loss of services not deemed "essential."

There were the World War II veterans turned away from an outdoor memorial that's usually accessible at any hour of the day or night.

The sick and dying children who couldn't enter experimental drug trials at the National Institute of Health.

The tearful brides whose weddings were cancelled after national parks were closed. The sportsmen locked out of wildlife refuges at the start of hunting season.

The desperate parents whose federally-funded day care centers were closed. The salmonella outbreak which struck while food inspectors and disease trackers were on furlough.

And the latest outrage: a report Tuesday that the families of four soldiers and one Marine killed in Afghanistan over the weekend will not receive a $100,000 'death gratuity' aimed at helping them cover funeral costs and make ends meet until survivor benefits kick in.

“If Congress were trapped in a car that sunk down in a river, I would swim to the window, and I would look them all in the eye and say, ‘Suck water,’” Randall Patterson -- whose son Cody Patterson, 24, was among those killed -- told NBC news.

To top it all off: news that not only do congressmen get to collect paychecks while most federal workers live off their savings and credit cards, but they also get to use the steam room at a congressional gym deemed "essential" enough to remain open.

While the economic consequences of an extended shutdown would be dire -- and disastrous if Congress also fails to raise the debt ceiling on October 17 -- there could be some social benefits, said Steffen Schmidt, a politics professor at the University of Iowa.

Americans are generally quite ignorant when it comes to how much the federal government impacts their lives and how efficiently it operates, Schmidt said.

"More and more people are going to, at the end of this, be aware that they are getting a lot of good value for their money," he said in a telephone interview.

Even die-hard conservatives could realize that there are parts of government that they trust and rely upon when they're confronted with the loss of everything from their favorite boat ramps or camping spot, to their veteran's benefit checks, he said.

"Unfortunately, people confuse their lack of confidence in the performance of Congress with government," he said. "Government is the post office, the park service, keeping airlines safe, stopping pandemics from spreading, doing research on viruses."

Some 28 percent of Americans said they were "personally inconvenienced" by the shutdown, according to a Pew survey published Monday.

"A lot of people said, especially on the right, hey nobody's going to notice," said Charles Franklin, a public opinion expert at Marquette University in Wisconsin.

"The polling shows that's not true, but the true understanding of the effect of government would be if literally ever federal function were shut down. No weather forecasts, no air traffic control -- nothing."

There is also evidence that the latest political showdown could simply deepen existing partisan divides.

"While people like the idea of compromise, when it gets to the actual issues it's much more divisive," Carroll Doherty, associate director of the Pew Center for the People and the Press, told AFP.

"The resolution when it comes is likely to disappoint people on either side or perhaps on both sides."

The Pew survey found that a majority of Republicans (54%) and Democrats (58%) believe it would be "unacceptable" for their side to back down and either pass a budget which leaves President Barack Obama's landmark health care law intact or accept changes to the law.

NASA to deflect asteroid in key test of planetary defense