COLOMBO - With a bloody civil war over and a cautious peace at hand, hardline Buddhist monks are rallying Sri Lankans against what they say is a pernicious threat: Muslims.

In just over a year, the monks of Bodu Bala Sena (Buddhist Power Force) have amassed a huge following, drawing thousands of fist-pumping followers who rail against the country's Muslim minority.

Buddhists have attacked dozens of mosques and called for boycotts on Muslim-owned businesses and bans on headscarves and halal foods. At boisterous rallies, monks claim Muslims are out to recruit children, marry Buddhist women and divide the country.

"This is a Buddhist nation, so why are they trying to call it a multicultural society?" said Galagoda Atte Gnanasara, the 37-year-old pulpit-pounding monk who co-founded the group in 2012.

"Not everyone can live under the umbrella of a Buddhist culture." 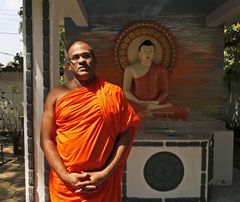 Galagoda Atte Gnanasara, the founder of Bodu Bala Sena (BBS), or Buddhist Power Force in 2012, poses for a photo at the BBS office in Colombo. (AP Photo)

There have been few if any physical attacks on people, unlike in Myanmar, where Buddhist monks helped incite communal violence in 2012 and 2013 and even stood watch as Buddhist mobs slaughtered Rohingya Muslims.

But many Sri Lankans and human rights workers are alarmed, saying the monks are creating communal divisions and giving Buddhism a bad name.

Nearly all of the dozen critics of Bodu Bala Sena interviewed for this story declined to speak on the record, fearing reprisals.

The government only rarely steps in to defend or protect Muslims, who make up roughly 10% of the country's 20 million people.

Many see the silence as tacit approval, but Media Minister Keheliya Rambukwella said it is intended to encourage community members to work out their own problems. He said the anti-Muslim rumblings are "minor agitations that are normal in any multicultural society".

"If things get more serious, we will take action," he said. "These kinds of things can ruin a nation, we are aware of that."

In September 2011, Buddhists reportedly smashed a 300-year-old Islamic Sufi shrine to rubble in the ancient city of Anuradhapura, a Unesco world heritage site. Police have denied that the incident happened, but photographs taken by locals show at least a dozen officers watching as young men hammer the shrine to pieces while a monk holds a burning green Islamic flag.

In April 2012, a 2,000-strong Sinhalese mob including monks ransacked Jumma Mosque in the north-central city of Dambulla as police looked on.

The government later ordered the removal of the decades-old mosque, saying its location within a sacred Buddhist area was an affront.

Muslims say they are also the targets of ludicrous conspiracy theories, including rumours that they spit three times in any dish before serving it to a non-Muslim, or that Muslim shops sell women's undergarments tainted with chemicals that cause infertility.

Many Muslims feel they are being victimised because of their visibility in the economy -- a role they have played for more than 1,000 years since Arab traders brought Islam to Sri Lanka and allied with the Sinhalese against Spanish and Dutch colonial forces.

Today, they control at least half of the island's small businesses and hold near-monopolies in the textile and gem trades.

Because most speak Tamil, and not Sinhala, they were key players in military intelligence during the civil war against ethnic Tamil rebels.

"We never thought the government would turn on us," said Mujibur Rahman, a Muslim member of Colombo's provincial council. He and other critics contend that the 2009 civil war victory left a triumphant Buddhist Sinhalese majority searching for a new target.

"The president needs to create a new security problem to avoid actually having to govern," Rahman said. "He has built an image for himself as a Sinhalese Buddhist hero and saviour. He needs a new enemy to keep that up."

The government dismisses the idea as absurd, and Bodu Bala Sena denies any role in organising attacks. But even some Sinhalese have their suspicions.

"The BBS is trying to push the country toward racial and religious conflict," said a Sinhalese business owner who would only give his first name, Susantha. "Sometimes I suspect they are carrying out a contract for the government to turn attention away from issues such as the economy, healthcare and education."

Gnanasara and Kirama Wimalajothi started Bodu Bala Sena after splitting from a group they said was not militant enough in protecting Buddhist interests.

The brawny, bespectacled Gnanasara said that, with about 70% of the population practising Buddhism, the country has a duty to uphold the religion's traditions, preserve its heritage sites and police against conversion to other religions.

"The secret to my popularity is that I speak the truth," he said in an interview at Bodu Bala Sena headquarters, in a Buddhist cultural centre near Colombo.

Gnanasara said there were "extremist forces trying to create divisions, buy our lands, marry our wives and recruit our children. The same thing happened in Malaysia, the Maldives and Bangladesh -- all now Muslim countries. The same thing may happen in Sri Lanka if we're not careful."

At a rally in August, Gnanasara urged Sri Lankans: "Don't vote for any politician who does not admit this is a Sinhalese Buddhist country."

The aggressive tones have clashed with the country's pledge to pursue postwar reconciliation, a pledge still largely unfulfilled as the government flouts international calls for an independent war crimes probe.

Analysts say radical Buddhism is just one sign of human rights being sidelined in Sri Lanka. With the country revelling in postwar relief, lawmakers loyal to President Mahinda Rajapaksa passed a constitutional amendment in 2010 extending his term limits and revoking guarantees of independent police, judiciary and electoral commissions.

"We are seeing more human rights violations right across the board," Amnesty International director Steve Crawshaw said. "The government can't stand any forms of protest or criticism, and yet it appears to actively turn away from violence and lawlessness against other ethnic minorities and religions."

The justice minister and Colombo's mayor are both Muslim, but neither has made any public moves to address tensions.

The country's Tamils, who are mostly Hindu and account for about 11% of the population, have remained largely quiet and cowed since the army routed the Tamil Tiger rebels.

But many Tamils today are frustrated, too, as they await postwar reconciliation measures including the return of all seized property and land.