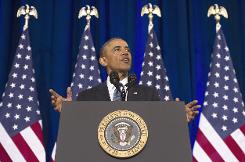 US President Barack Obama speaks about the National Security Agency (NSA) and intelligence agencies surveillance techniques at the US Department of Justice in Washington, January 17, 2014

In a long-awaited speech designed to quell a furor over the programs exposed by Edward Snowden, Obama also said he had halted spy taps on friendly world leaders and proposed new shields for foreigners caught in US data sweeps.

"Given the unique power of the state, it is not enough for leaders to say: trust us, we won't abuse the data we collect," Obama said at the US Justice Department.

Obama's proposals represented a search for common ground between the intelligence community's resistance to reform and civil liberties advocates who view phone and Internet data trawling as a mass invasion of privacy.

They emerged from a prolonged period of reflection by the president and a comprehensive review of the national security apparatus that sprung up hurriedly after the September 11 attacks in 2001.

But after charting new guidelines, the president left many of the details of proposed reforms either with Congress, top officials or the NSA itself.

"The power of new technologies means that there are fewer and fewer technical constraints on what we can do," Obama said.

"That places a special obligation on us to ask tough questions about what we should do."

It is doubtful however that the reassessment would have happened were it not for explosive disclosures by Snowden in one of the greatest security breaches in US history.

In the most significant reform, the president committed to ending the NSA's hoarding of telephone "metadata" detailing the duration and destination of hundreds of millions of calls but not their content.

He did not believe that abuses had occurred or that US spies had been "cavalier" about civil liberties.

But he called for a new approach.

"I am therefore ordering a transition that will end the Section 215 bulk metadata program as it currently exists, and establish a mechanism that preserves the capabilities we need without the government holding this bulk meta-data."

Obama called on Attorney General Eric Holder and the NSA to come up suggestions for an alternative way to hold the material within 60 days.

Possible alternatives include keeping records with reluctant telecommunications firms, which are currently compelled to turn it over to the NSA, or to deposit it with a third party.

Obama also said that from now on, NSA agents would need the endorsement of a special intelligence court before accessing data on a specific target.

He offered one caveat however: that order would not apply in the case of a genuine national security emergency.

The NSA will also now only be permitted to access call data from people at two removes from a suspect in an investigation. Previously it could probe three "hops."

Obama also said that he had already ordered a halt to dozens of phone tap operations targeting friendly foreign leaders.

"I have made clear to the intelligence community that -– unless there is a compelling national security purpose –- we will not monitor the communications of heads of state and government of our close friends and allies," he said.

The move followed an outcry over claims by fugitive contractor Snowden, now exiled in Russia, that US spies snooped on the phone of German Chancellor Angela Merkel and other leaders.

But he also took a swipe at the chorus of complaints about US espionage from some allies.

"We will not apologize simply because our services may be more effective," he said, and noted that rivals like Russia and China would not undertake such an open debate.

Obama is also taking the unprecedented step of extending personal protections enjoyed by Americans to foreigners caught in US phone and Internet data sweeps.

Obama, who wants Snowden to return home to face trial, only mentioned the US nemesis in passing, saying the damage he had wrought may not be known for years.

The reforms got a guarded welcome from privacy advocates, questions about how they would work -- and some disappointment they did not go further.

"President Obama’s recognition of the need to safeguard the privacy of people around the world is significant, but insufficient to end serious global concern over mass surveillance, which by its very nature constitutes abuse," he argued.

Battle lines were already being drawn in Congress.

"The president's blueprint was bold and courageous, but it was only a first step," Democratic Senator Richard Blumenthal said.

"I think he is really in essence passing the torch of reform, providing a broad blueprint which is very robust, but leaving a lot of the details to Congress."