"Glory to Ukraine!" Ukraine's opposition leaders bellow at supporters from the stage in Independence Square. "Glory to the Heroes!" thousands of protesters thunder back. 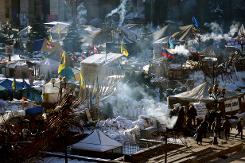 A view of tents set at the "Maidan" Independence Square in Kiev by Pro-European Union demonstrators taken on January 30, 2014

The slogan has become one of the chief motifs of the opposition protest seeking to unseat President Viktor Yanukovych and bring Ukraine closer to the European Union that has rocked the country.

But for Ukrainians it also carries a far wider resonance as a slogan of the Organisation of Ukrainian Nationalists (OUN) and the Ukrainian Insurgent Army (UPA) who battled Poles, Soviet and Nazi forces for control of Western Ukraine in World War II and subsequently.

The OUN and UPA's leaders are still idolised by Ukrainian nationalists as champions of independence who waged an astonishingly durable guerrilla war against Soviet forces that lasted up to the mid 1950s.

Yet the UPA is hated in Poland for its campaign of slaughter against Polish civilians in the Volhynia region in 1943 and then in Galicia in 1944, now condemned as ethnic cleansing.

The rebels on occasion collaborated with occupying Nazi forces as well as fighting them.

Most controversially, some of its members served in the Galicia branch of the SS.

Yet the wartime insurgents have provided a huge inspiration to the Ukraine protest movement.

The red and black flag of the UPA flies from many of the tents of protesters who have been camped out on Kiev's central Khreshchatyk Avenue for the last weeks.

Meanwhile, banners carry the angular features of Stepan Bandera, the controversial UPA leader who was assassinated by cyanide gas poisoning in West Germany in 1959 by a Soviet agent.

A huge placard right next to the stage in the protest hub of Independence Square shows Bandera's face with the slogan: "You will get a Ukrainian state or you will die fighting for it."

In an action that for some had uncomfortable echoes of Nazi Germany, hundreds of activists largely from nationalist Ukraine opposition group Svoboda (Freedom) on New Year's Day held a torch-lit procession through Kiev to mark the 105th anniversary of Bandera's birth.

"Bandera and the UPA are simply heroes. They fought for a free and independent Ukraine and they died for it," said protester Yaroslav as he took a souvenir photograph in front the Bandera placard with two friends.

One of the groups that played a key role in the radicalisation of the protests in recent weeks, Trizub (Trident), says that it is founded on the basis of the "ideology of Ukrainian nationalism based on the interpretation of Stepan Bandera."

The cult of Bandera has always been strong in the west of Ukraine, where his statue has pride of place in several cities. But with the protests, the UPA imagery has now spread to Kiev.

"Bandera and other radical nationalists from the 1930s and 40s are problematic heroes, not really suitable for unifying all Ukrainians around them," said Serhy Yekelchyk of the University of Victoria in British Colombia.

"Moreover, they are poor symbols of the European choice," said Yekelchyk, author of "Ukraine: Birth of a Modern Nation".

But Yekelchyk said the use of UPA imagery and slogans was more of a potent symbol of protest against the current government and Russia rather than adulation for the insurgents themselves.

"The reason for the sudden prominence of Bandera's portraits in Kiev is that it is the strongest possible expression of protest against the pro-Russian orientation of the current government," he said.

"This is bound to retreat from mainstream political sphere once free democratic expression is restored."

In a sign of the divisiveness of Bandera over half a century after his death, the "Hero of Ukraine" award that was bestowed on him by president Viktor Yushchenko in 2010 was swiftly revoked under Yanukovych's rule.

While Soviet security forces finally finished off the UPA in the Carpathian mountains of west Ukraine, it lives on in spirit if not reality.

A hugely popular theme restaurant has been open for several years in Lviv, paying tribute to UPA fighters and making patrons say "Glory to the Heroes" in order to get in.

Ukraine's interior ministry meanwhile said it was checking a claim by an organisation calling itself the Ukrainian Insurgent Army (UPA) that was responsible for the deadly shooting of a riot policeman in Kiev on January 24.

Meanwhile, the catchy slogan "Glory to the Heroes!" is here to stay.

"Street protests reappropriated it as their own and I would predict that it is going to stay as part of mass discourse," said Yekelchyk.