Testicles, bugs and grubs, a taste of traditional Hanoi
World

Testicles, bugs and grubs, a taste of traditional Hanoi

HANOI - It is not every day you go to a market looking for chicken's testicles, but Dinh Phung Linh, who runs popular cooking classes in central Hanoi, insists there is nothing to be squeamish about.

"They are delicious. You can stir fry with bean sprouts or vegetables, or boil and dip in fish sauce," he says, leading the way through stalls that seethe with creatures - snails, field crabs, eels - all attempting to make a bid for freedom.

Staple Hanoian dishes like pho bo beef noodle soup are available across the world, but other traditional, lesser-known delicacies might not be so tempting to a Western palate.

Linh is founder of the Hanoi Cooking Centre, which also organizes street food tours. He encourages tourists to try food they are not used to, not just to challenge their palate but also for the cultural experience.

Unfortunately - or not - the vendor is out of chicken testicles, but Linh is not perturbed. He leads the way to the next ingredient: whole frog. While frogs legs are a well-known delicacy in France, the amphibian was devoured in Vietnam long before colonial rule, Linh explains.

"The deep-fried leg is influenced by the French, but in Vietnam we eat the whole thing too. We chop it up and deep-fry or we stir fry with fresh bamboo. We deep-fry the skin so it's crispy." 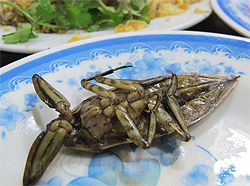 The meal itself is perhaps not the most "weird," but the process of preparing the meat is certainly unnerving. The frogs are selected live from a bucket and hit on the head. Their stomachs are then removed and they are skinned, but the process isn't always very efficient. As we walk past, several skinned frogs attempt to get out of the bucket.

Vietnam has a "waste not, want not" attitude to food, hence the chicken's testicles, which are removed from the males if they are not selected for breeding, Linh says. This is because Vietnam has long been a poor country, even before French colonial rule and decades of war with France and the United States.

"Some foods we ate because Vietnam was a poor country even before the war, so we didn't have anything to eat," he says. "Always we were so poor we ate everything."

One staple in northern Vietnamese com binh dan - cheap restaurants that sell a variety of dishes served with rice - might be overlooked by the uninitiated. Silkworms are small, brown grubs, which when fried have a delicate nutty flavour.

"Sautee them with salt and pepper and a little fish sauce," says Nguyen Thi Phuong, 24, who works at a com binh dan near the city centre.

She says she buys the worms from the market every morning, although there are fewer available in the cold northern winters.

"They should be wriggling, that means they are fresh. I never buy the dead ones. The dead ones could be imported from China," she says.

One of the capital's best known street foods, banh cuon, which means "rolled rice cake," has a very traditional accompaniment that even many young Hanoians don't know about.

The dish consists of a very thin, steamed-rice pancake, often sprinkled with ground pork, minced wood ear mushroom, and then rolled up and topped with fried onion. But in a few older establishments, something else is offered too, the ca cuong giant water bug.

The bug, which is several centimetres long, is steamed for about 15 seconds and then cut up and placed in a small bowl of fish sauce. If you don't want to eat the body, you can add a couple of drops of water bug essence, which smells a little like artificial banana flavour.

"If you eat too much it makes your tongue numb," Linh says.

Banh Cuon Gia Truyen, in the city's Old Quarter, is one of the best such restaurants in town, and one of the few to serve ca cuong.

"I have sold banh cuon for more than 40 years, since 1973. I am the third generation of my family to sell it here," says proprietress Tran Thi Van.

The insect is not as common as it used to be because farmers use so much pesticide, she says.

"Old people like them but young people don't know how to eat them," she says. "I have many customers who left Hanoi after the war and came back. They remembered this dish and wanted to eat it again.

"Only the traditional banh cuon restaurants sell them, only people of my generation know that," Linh says.

"A long time ago when I was a child, any time the weather changed a lot of insects like grasshoppers, crickets, flies, including this one, came flying out onto the street. So we caught them to have those in the meal," he says.

For people like Linh, it is a treasured taste of the past in this rapidly developing city.