The junta yesterday moved to calm down panicked alien labourers, including the bulk of Thailand's foreign workforce from Myanmar, reiterating that there were no harsh crackdowns being planned. 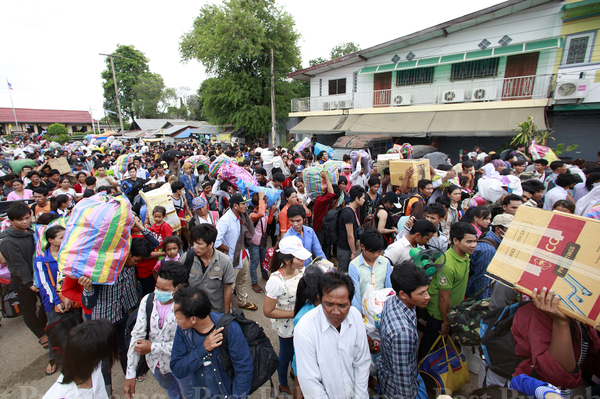 Cambodian workers travelling from Bangkok to return home get off at Aranyaprathet railway station in Sa Kaeo province gollowing rumours the military will launch a crackdown on migrant workers. (Photo by Thanarak Khoonton)

Gen Sirichai Disthakul, chairman of the National Council for Peace and Order's (NCPO) sub-committee on transnational labour, yesterday led a team to visit employers and migrant workers in Samut Sakhon, a province with one of the largest populations of migrant workers, mostly from Myanmar.

The visit was apparently aimed at curbing problems facing business operators who were losing workers and whose businesses could be damaged by sudden labour shortages, both legal and illegal.

Gen Sirichai asked for cooperation from employers in Samut Sakhon to urgently report to the NCPO the number and names of the Myanmar nationals they were hiring, either legally and illegally.

He said it was part of the NCPO's measures to manage foreign labourers.

Gen Sirichai said the NCPO plans to pilot its migrant labour management policy in Samut Sakhon and Ranong provinces. They were conducting a survey for the plan which includes residential zoning arrangements and public health services.

“We insist that there’s no policy to crack down on foreign workers,” Gen Sirichai said.

NCPO chief Prayuth Chan-ocha also insisted yesterday the NCPO was "regulating" the employers hiring migrant workers and it was crucial to abide by the law by formally registering the migrant labourers who currently live and work in Thailand.

NCPO deputy spokesman Winthai Suvaree also insisted the NCPO did not have any policy to crack down on migrant workers but would have to re-regulate the migrant labour that had been a problem plaguing Thailand for more than a decade.

The most urgent issues facing migrant labour include the abuse of child labour, human trafficking, and the corrupt actions of some state officials and labour brokers profiting from illegal businesses associated with migrant workers, Col Winthai said.

Employers of migrant labourers are simply required now to carry on with business as usual while taking the best care of their workers, he said.

The chief aim of the NCPO's move to re-regulate migrant labour is to correctly register migrant workers so they can live and work in Thailand and receive proper work benefits including health care, he said.

The Samut Sakhon Chamber of Commerce, the Federation of Thai Industries, relevant clubs and associations yesterday also signed a memorandum of understanding not to hire children or illegal workers.

Gen Prayuth had previously vowed to finish registering all alien workers living in Thailand in one year.

Of the total, about 1.8 million workers had entered Thailand illegally previously but later went through nationality verification and received permission to live and work temporarily here, Mr Thanich said.

After his visit to Samut Sakhon, Gen Sirichai said the province was conforming properly with the NCPO's migrant labour management policy and should be used as a model for other provinces.

But he warned that influential figures who earn money from illegal businesses related to migrant labour should stop, or else face harsh action.

Ms Kamolwan, a construction firm owner who asked that her last name be withheld, said her 100 Cambodian workers informed her that they had to go back to Cambodia but promised to return later.

Her small firm was suffering greatly from a labour shortage, she said.

Rumours that some Cambodians had been detained and physically assaulted emerged about a month ago, she said.

"Many of my Cambodian workers insisted their parents were very concerned about their safety and that was why they had to go home," Ms Kamolwan said.

She urged the government to open a new round of migrant worker registration to turn illegal migrant workers into legal ones, saying the current policy of requiring alien workers to seek visas and work permits requires a lot of time and money.

Sanguan Saengwongkij, vice-president of the association of rubber wood operators in the eastern provinces, said the Cambodian worker exodus had led to several businesses in Rayong's Klaeng district having to close temporarily.

A state official in Sa Kaeo province who asked not to be named said that the exodus of Cambodian migrant workers had mainly been caused by rumours spread by telephone from Cambodia that Thai soldiers had been capturing and murdering Cambodians.

If the news of the NCPO's policy to re-regulate migrant labour prompted Cambodian workers to flee, the question was why illegal migrant workers of other nations were not affected by the same news in the same way, said the same official.

Jeerasak Sukhonthachart, permanent secretary for labour in his capacity as deputy chairman of the NCPO's sub-committee on transnational labour, said the exodus of Cambodian workers has begun to take a toll on businesses.

Many dead in 'horrific' air strike on Yemen jail