"Voluntourism" in Cambodian orphanages comes at a cost
World

"Voluntourism" in Cambodian orphanages comes at a cost

SIEM REAP - A young Swedish volunteer is trying to get a gaggle of unruly Cambodian children to repeat the English alphabet, but they are much more interested in playing with the sparkly stickers they just received from a visiting tourist. 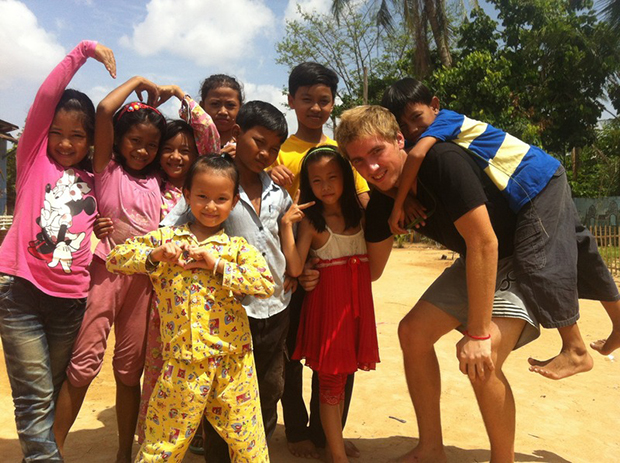 The lesson, in an outdoor classroom only a few kilometres away from Cambodia's main tourist magnet, Angkor Wat, is being given by one of the many young volunteers who are spending their summer vacations in one of the world's poorest countries.

"I was here in Siem Reap, so I just walked in and got a position. I was looking for somewhere to volunteer and teach kids who can't get an education," says Fredrick, a friendly 24-year-old backpacker who has been teaching at the orphanage for one week.

Like many other so-called "voluntourists", Fredrick has no university degree or any teaching experience.

As well as backpackers like Fredrick, Siam Reap's "orphanages" often attract Western university students who arrive during what is actually low season for visitors, with the aim of doing something altruistic on their vacation.

But Friends International, a leading child-protection group, warns that voluntourists do more harm than good.

Advertisements for Friends' campaign, displayed on the backs of tuk-tuks and on leaflets in travel agencies, say, "Children are not Tourist Attractions", showing an image of Westerners photographing Cambodian children in an enclosure, like animals in a zoo.

The group points to a lack of background checks on the volunteers and inadequate training as reasons why the practice should be stopped.

In addition, Mr Sutherland says, most of the children are not orphans at all, just children from poor families.

At Fredrick's orphanage, called the Children and Development Organisation (CDO), founder and director Mom Savorn readily admits that of the 25 children in her care, only two are actually parentless.

However, she stresses, they come from a poor village and her orphanage offers them an opportunity to receive food and education.

"We firmly believe that family-based care is the best alternative," he says.

Cambodia's Ministry of Social Affairs agrees that residential care should be a "last resort".

A study by the ministry in 2012, conducted alongside Unicef, found there were 269 orphanages in Cambodia and that only 23% of the almost 12,000 children in them were real orphans.

The children at CDO are relatively well-dressed but scrawny, and their dormitories are squalid. The boy's dorm, made from corrugated iron and wood, sleeps 16, the mattresses have no sheets and there is no fan.

Sara, 21, from Portugal, recently finished a degree in business and has been working at CDO for two months.

"I know some people don't understand why we bring the kids here when they have families," she said, but "they can have a better life here".

The orphanage costs approximately US$2,000 (65,000 baht) per month to operate, Mom say, and receives funding from outside organisations and visitors.

"But my funds come mainly from visitors, and then they find a way to raise money [after their visits]," she says.

While Sara and Fredrick are not paying the orphanage for their experience, many websites that organise similar placements charge thousands of dollars for the favour, a practice Mom does not follow.

"In Cambodia, they always complain of corruption, so I can't charge my volunteers," Mom says.

Emma, a university student from Sydney, Australia, paid one such organisation, called Projects Abroad, about $3,000 to volunteer for a few weeks at an orphanage in Siem Reap in 2012.

She now regrets doing so.

"When I got home I learned more about the tourism trade there, and it made me feel sick to think I was involved in that," she says.

"In a way it did feel like the kids were exploited for my 'experience.' They prey on the fact that some people want to help and get involved, and I think that sucks people in," she says.

CDO director Mom makes no apology for wanting to draw people into the orphanage. A billboard outside the compound reads: "Visitors Are Welcome."

The orphanage is only able to keep going through donations from tourists, she says.

Another billboard at a nearby orphanage called Acodo advertises a daily "Charity Show" with "performance, music, and songs by the vulnerable children."

The merry-go-round of voluntourists at orphanages is another serious problem, according to Friends.

CDO has five European volunteers, including Sara and Fredrick. Asked if he's worried how his leaving will affect the children who seem very attached to him, the Swede says that is why he will stay for one or two months.