Urgent reforms are needed to regulations and elephant registration procedures in Thailand to bring wild and domesticated animals under one law and stop illegal sales of captured wild elephants across the border from Myanmar, according to a new report released on Monday. 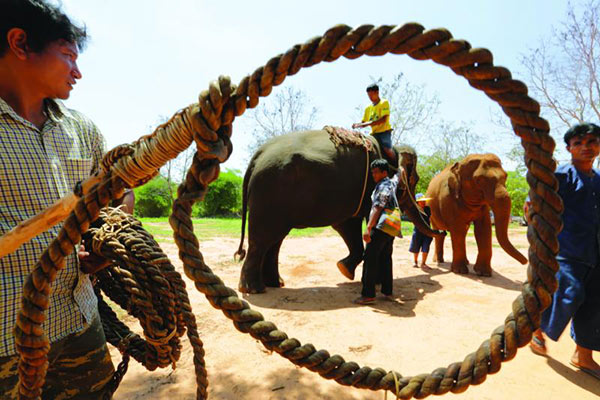 The report on the live elephant trade in Thailand provides details of 79 to 81 wild elephants illegally captured for sale into the tourist industry in Thailand between April 2011 and March 2013.

The report was prepared by TRAFFIC, a wildlife trade monitoring network, on behalf of Elephant Family, an organisation dedicated to the conservation of Asian elephants.

At least 60% of the animals trafficked originated in Myanmar where the capture of elephants is considered a serious threat to the future survival of that country’s wild population of 4,000–5,000 Asian elephants, according to the report.

In Myanmar, domesticated elephants are used to corral wild elephants animals into pit-traps where older protective members of herds are often killed and the higher value, younger animals taken. The young are then transported to Thai—Myanmar border areas and then mentally broken and prepared for training before being sold into the tourism industry in Thailand, where they are put to work at tourist camps or hotels, the report said.

A Thai government-led clampdown against the trade began in February 2012 which examined the authenticity of the origin and ownership documentation of elephants held in captivity, but was not backed up with the necessary legislative changes to consolidate any gains made.

“Thailand’s action has caused the illegal trade in live elephants from Myanmar to halt, but unless urgent changes are made to outdated legislation and better systems are introduced to document the origin of elephants in tourists camps and other locations across Thailand things could quickly revert to their previous unacceptable state,” said Chris Shepherd, TRAFFIC’s regional director for Southeast Asia.

The report details the current legislation concerning live elephants in Thailand with different laws governing the status of animals from wild and domestic origin and young animals only needing to be registered once they reach eight years of age.

Penalties for those transgressing the law are also low, with the report describing them as “woefully insufficient to act as a deterrent to elephant traffickers”.

Confiscations of elephants in Thailand increased from single individuals in the period 2009 to 2011, to 34 animals in 2012 and 22 more in the first nine months of 2013. The animals were seized as part of the government clampdown although it is unclear how many prosecutions of owners of animals illegally held has subsequently taken place.

The report recommends urgent reforms so wild and domesticated animals are governed under one law with an emphasis on clarifying responsibilities for management, enforcement, co-ordination and oversight, as well as simplification of the ownership and registration of live elephants, including mandatory DNA registration and use of microchips.

In Thailand there are an estimated 2,500 to 3,200 wild elephants while the captive population is far greater, numbering 4,169 animals in 2012 according to government data. In Asia as a whole some 13 countries are home to a total population of between 40,000 and 50,000 animals. The Asian elephant is considered by International Union for Conservation of Nature (IUCN) to be endangered.

This week, an intercessional meeting of government representatives to the Convention on International Trade in Endangered Species of Wild Fauna and Flora (CITES) takes place in Geneva, Switzerland, where a discussion on the trade in live elephants will be on the agenda and the decision making body has the authority to instruct implicated countries to take decisive action against the trade.

Also on the agenda will be progress made by a number of countries, including Thailand, in implementing their Ivory Action Plans to address illegal trade in elephant ivory. The current 75-year old Thai legislation allows ivory from domesticated Thai elephants to be used legally, which has created a loophole whereby illegal ivory from Africa is laundered into the marketplace.

“All eyes will be on Thailand at this week’s CITES meeting to see what they are doing to address these critically important issues. The Asian Elephant is the forgotten elephant; it needs government support now more than ever. If the capture and smuggling of calves is not stopped, some of the last great wild populations of the species are at risk of extinction.”