US criticises SE Asia on rights

WASHINGTON — Lawmakers reviewed the “troubling” state of human rights in Southeast Asia Wednesday and criticised Thailand, Vietnam and Cambodia. But they reserved some of their toughest words for Myanmar, demanding an end to United States concessions to its quasi-civilian government. 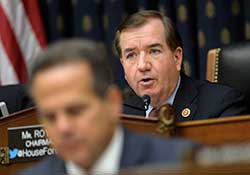 The Republican party chairman of the House Foreign Affairs Committee, Ed Royce, likened conditions faced by minority Muslims in western Myanmar to concentration camps. A Democratic party lawmaker questioned whether there were signs of genocide.

The hearing indicated congressional goodwill toward Myanmar's government has been exhausted, and criticism of the Obama administration's forward-leaning engagement policy has intensified.

Royce pronounced the outlook for human rights in Southeast Asia, a region of 620 million people, as "very troubling." The committee's top-ranking Democrat Eliot Engel said that as the U.S. looks to deepen its strategic interests in the region, promoting rights "is the right thing to do and it's also the smart thing to do."

While no lawmakers mentioned Wednesday's presidential election in Indonesia that the White House lauded as sign of its maturing democracy, the seven congressmen who spoke found plenty to criticize in region. They took aim at suppression of dissent and religious freedom in Vietnam, the strong-arm tactics of Cambodia's leader Hun Sen, and the military takeover in Thailand.

Conservative and rights advocate, Republican Rep Chris Smith, said, "Vietnam is in a race to the bottom with the likes of China and even North Korea." He criticized the leader of the Democratic-led senate for failing to allow a vote on a bill that has repeatedly passed the House of Representatives and would impose sanctions on Vietnamese officials complicit in rights abuses.

On Cambodia, Engel said the ruling party of Hun Sen, who has led the country for almost three decades, has tightened its "chokehold" on the media, silenced human rights advocates and failed to stop illegal land grabs. Royce said the ballot count in last year's flawed national elections was "truly preposterous."

Former senior State Department rights official, Lorne Craner, recommended that the U.S. avoid high-level contacts with Cambodia's government until it resolves its dispute with the main opposition bloc which is boycotting parliament as it presses its demand for an independent investigation into election irregularities.

Democratic Rep David Cicilline joined several lawmakers in condemning the treatment of Myanmar's Rohingya Muslims. Some 140,000 Rohingya have been displaced and corralled in camps after bearing the brunt of vicious outbreaks of sectarian violence involving majority Buddhists, while tens of thousands more have fled the country.

He questioned whether there was an "element of genocide in the attacks against the Rohingya population." Rights advocate and former Democratic congressman Tom Andrews, who has visited the strife-hit Rakhine State, testified he thought there was, and that attacks were systematic and done with the support of the government.

Myanmar dismisses that notion, and president Thein Sein has vowed serious actions against perpetrators of sectarian violence. But amid fears of rising nationalism ahead of 2015 elections, the former general has also recently been criticized by the State Department for proposing discriminatory legislation, including possible criminalization of interfaith marriage.

Royce demanded an immediate cessation of nascent U.S. military-to-military cooperation with Myanmar until the persecution of minorities ends, and his Democratic counterpart echoed the desire for a more circumspect outreach to the country also known as Burma, which has been rewarded with rapid sanctions relief and massive aid in the past two years.

"We need to see real progress from Burma's leaders on these human rights issues before we provide the military-led government with any further concessions," Engel said.