TAIPEI - Taiwanese investigators Tuesday said pilots of an Apache helicopter were to blame for a crash in which the US-made attack chopper careered into an apartment block earlier this year. 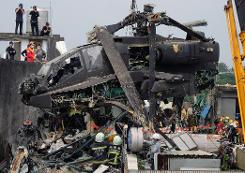 The crash took place barely six months after a fleet of the US-made attack helicopters were delivered to the army.

The AH-64E chopper hurtled into the roof of a civilian building near its base in the northern Lungtan township during a training mission in April, slightly injuring the two pilots.

Debris was scattered across the street below but remarkably no civilians were hurt.

A military investigation on Tuesday ruled out mechanical failure and said the likely cause was "human error".

"The investigation report shows that the primary causes of the accident were the combination factors of human errors and environment", Major General Huang Kuo-ming told reporters.

Huang said the pilots were caught unprepared by fast descending clouds while flying at a low altitude, but added that the duo should have checked the flight panels to maintain adequate height.

During their investigation the military consulted with local flight safety experts and sent maintenance and flight records as well as cockpit voice recordings of the ill-fated aircraft to the United States for analysis.

Huang said the Apaches, which were grounded for safety checks following the crash-landing, have now resumed flights, but he added that the army has stepped up simulator training for pilots.

Taiwan took delivery of its first six AH-64E Apaches in November as it modernises its military despite warming ties with China.

It temporarily grounded the choppers from December to February for checks after Washington warned the model could malfunction.

The Taiwanese army is the first force outside the US to use the Apache AH-64E, the latest variant of what is described as the world's most powerful attack helicopter. South Korea has also placed an order for a fleet of AH-64Es.

Taiwan has so far received 18 of the 30 helicopters it ordered and the rest will be delivered by the end of 2014. The order was part of a $6.5 billion arms deal unveiled in 2008 that irked Beijing.

Taiwan and China split in 1949 after a civil war. However, Beijing still regards the island as part of its territory awaiting reunification, by force if necessary.