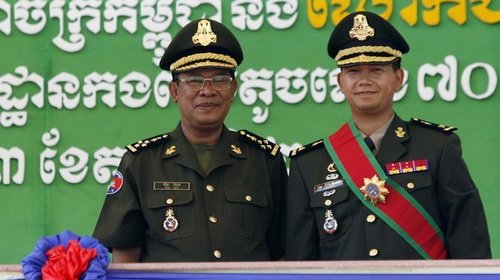 His 1999 graduation from the US Military Academy at West Point has been a road to the top for now-Lt Gen Hun Manet, promoted to deputy army chief and possible heir of the political power of his father, Prime Minister Hun Sen. (File photo)

A source said relations between the countries have improved since the recent release of political activist Veera Somkwamkid.

“The Cambodian side proposed the visit and Prime Minister Hun Sen assigned Gen Tea Banh to come as the government’s representative,” the source said.

“Sending the defence minister, who is close to Thailand, can be described as an act of goodwill after border clashes near the Preah Vihear temple and the international court case. The most important thing is that three military commanders, including Lt Gen Hun Manet who plays a leading role in the Cambodian military, are part of the delegation.”

Moves to mend ties between the countries began after the military coup on May 22. Phnom Penh has helped Thailand curb the activities of dissidents hiding in Cambodia since the power seizure and agreed to free Mr Veera who had been detained there for illegal entry and espionage, said the source.

“Military ties and the Preah Vihear temple will be discussed. A possible outcome of the visit could relate to the status of those hiding in Cambodia. They may have to find a new shelter,” the source said.

Both sides are expected to bring a number of bilateral issues to the meeting table, including border affairs, terrorism, illegal migrant workers and drugs.

On the Preah Vihear temple conflict, the military delegation is expected to follow up on progress to implement the International Court of Justice (ICJ) ruling on the case.

The court ruled on Nov 11 last year that Cambodia has sovereignty over the whole territory of the promontory of the temple and that Thailand is obliged to withdraw its forces from the area.

However, the court did not decide which country has authority over a 4.6 square kilometre disputed area. It said Cambodia and Thailand, as parties to the World Heritage Convention, must work together to protect the world heritage site.

During a trip to Cambodia this month, Foreign Ministry permanent secretary Sihasak Phuangketkeow was quoted by the Phnom Penh Post newspaper as saying that Thailand will resume talks regarding the ICJ ruling after political stability returns to the country.

According to the source, the National Council for Peace and Order (NCPO) will brief the Cambodian military delegation about political developments since the coup.

The NCPO will also assure Cambodia that Thailand will maintain a good relationship with Phnom Penh.

Panitan Wattanayagorn, a political sciences professor at Chulalongkorn University, said the Cambodian government has made it clear it wants to have a better relationship with the junta.

He cited the recent release of Mr Veera and the fact the Cambodian premier has distanced himself from Thai dissident groups as proof.

“Cambodia might want to resolve border problems from the ICJ’s ruling, since the Cambodian side is prepared to propose a management plan for the surrounding area of the Preah Vihear temple,” he said, adding that progress on the issue would help boost the standing of Cambodian Prime Minister Hun Sen.

But he said efforts to improve relations could be turbulent. The government led by former prime minister Abhisit Vejjajiva had a good relationship with Cambodia at the beginning but it later turned sour.

Mr Panitan, who was a government spokesman during the Abhisit administration, predicted the Thai-Cambodia relationship would be stable for a couple years under the NCPO’s reign.

When asked about Lt Gen Hun Manet, Mr Panitan said he has had close relations with Thai military officers for long time. The trip will be an important event showing Lt Gen Hun Manet as a successor to Hun Sen, he said.