PHNOM PENH — Chy Sila has come a long way since he invested his $500 life savings in a small shop in Cambodia's capital to sell bootleg music and pirated movies.

Fast-forward 16 years and Cambodians are now watching the films he distributes not on scratchy DVDs but in a $5 million multiplex theatre, a joint venture with Thailand's Major Cineplex and the centrepiece of a new mall owned by Japanese retail giant Aeon that drew two million visitors in its opening month. 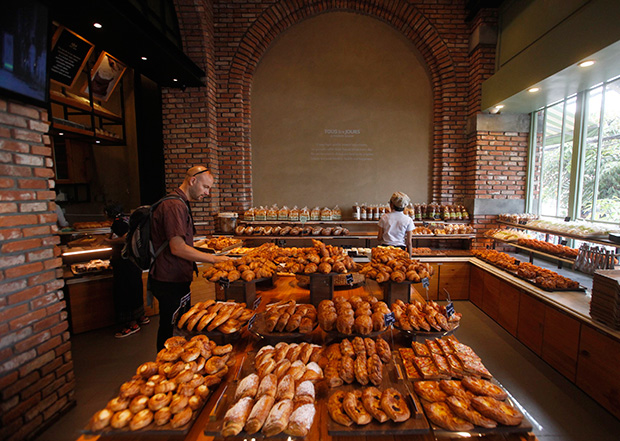 A man picks pastries at a bakery of CBM Corp in Phnom Penh. Today's capitalist Cambodia, with an economy that averaged 8.1% growth from 2000-2012 and expanded 7.4% last year, according to the World Bank, is a far cry from what the Khmer Rouge envisioned when it swept to power in the 1970s. (Reuters photo)

The 39-year-old former tour guide, university dropout and son of a mechanic is one of the biggest success stories in a country that was for years Southeast Asia's war-torn, aid-dependant basket case.

Though poverty is still rife in the countryside, an urban boom and robust growth fuelled by garment manufacturing for brands such as Nike and Gap has given rise to a growing consumer class that earns triple the average income.

"We see there's a lot more buying power than before," said Mr Sila as he took a bite from a croissant and sipped cappuccino at one of the bakeries run by his CBM Corp, Cambodia's biggest food and beverage firm.

"People can afford to pay so now's the time, we're ready for big brands to come here... Materialism is in peoples' hearts, what you wear, what you drive, represents what you are."

With a fast-growing working population and falling dependency ratio, Cambodia has the demographics most favourable to rapid economic growth.

Aeon plans more malls in Cambodian cities and operates a microfinance firm so shoppers can buy on payment plans. Its new mall, boasting shops from the likes of Mango, Levi's and Versace, drew 100,000 visitors daily when it opened in June.

A Rolls-Royce car is seen at a hotel in Phnom Penh. The carmaker entered the Cambodian market in June, appealing to a new wealthy class. (Reuters photo)

"The middle class is growing," said Aeon spokesman Satoshi Otsuka. "The average age for Cambodians is early 20s and they're fashion-conscious."

Mr Sila was born the same year the Khmer Rouge swept to power and says he lost "countless" relatives to Pol Pot's genocidal pursuit for a peasant utopia.

Today's capitalist Cambodia, with an economy that averaged 8.1% growth from 2000-2012 and expanded 7.4% last year, according to the World Bank, is a far cry from what the Khmer Rouge envisioned when it abolished money and property ownership, executed entrepreneurs and blew up the central bank.

Forty years after the population of Phnom Penh were emptied into labour camps, the city is swelling, with malls, office towers, hotels and fast-food chains popping up rapidly. Modern SUVs, and even the occasional Lamborghini or Porsche, cruise its once potholed streets.

The World Bank says the country of 15 million people is a top global performer in tackling poverty, having cut the ratio of poor from 53% of its population in 2004 to 20% in 2011.

Foreign direct investment has grown, from $2.65 billion recorded in 2007 to as high as $10.8 billion in subsequent years, according to Cambodia's investment board.

There's now a small stock market and the number of banks has nearly doubled since a decade ago, with 35 commercial lenders providing $9.5 billion in loans since records started. Cambodia's Credit Bureau expects that to surpass $14 billion by 2020 and credit demand to almost double to 3.3 million people.

"Loans are good for young people like me," said Hour Veasna, 20, as he signed up for financing from Aeon to buy a $600 camera, equivalent to five months salary. "We don't have enough money to purchase things that we want." 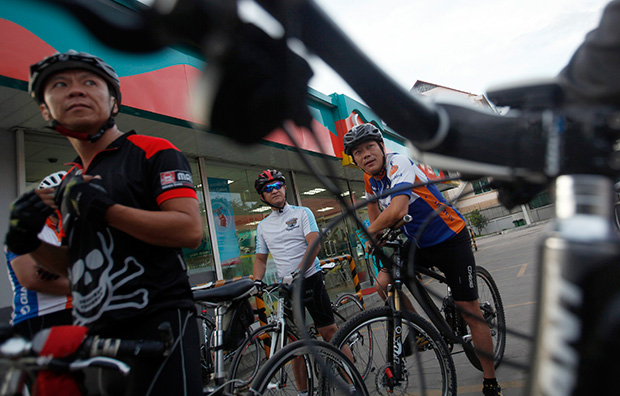 Chy Sila, chief executive officer of CBM Corporation, Cambodia's biggest food and beverage firm, right, gathers with friends at a petrol station before they go cycling for exercise in Phnom Penh. He has come a long way since he invested his $500 life savings in a small shop in Cambodia's capital to sell bootleg music and pirated movies. Fast-forward 16 years and Cambodians are now watching the films he distributes not on scratchy DVDs but in a $5 million multiplex theatre, a joint venture with Thailand's Major Cineplex and the centrepiece of a new mall owned by Japanese retail giant Aeon that drew 2 million visitors in its opening month. (Reuters photo)

In the first half of 2014, bank deposits grew 13% and loans to the private sector were up 28%, central bank Governor Chea Chanto said in a recent speech. Three million Cambodians use banks to deposit money, up 18% from last year, with about 600,000 users of credit or debit cards.

But there are still plenty of Cambodians who don't have such privileges and Mr Sila says he's saddened by the yawning gap between rich and poor. He raises money to send children to school and has cultivated an image as a humble entrepreneur, driving a Ford SUV rather than luxury cars such as Rolls-Royce, which entered the local market in June.

The new-found opulence of Phnom Penh can leave a sour taste in the mouths of those who struggle to get basic services in Cambodia, where hospitals are overwhelmed and average annual income is $950 - or $2.60 a day - nearly half that of Vietnam and a fifth of Thailand.

"Economic growth is only for the city," said rice farmer Heang Samnang, waiting with her sick daughter at the city's foreign-funded Kantha Bopha Hospital, which provides free treatment to millions of poor. "In rural areas, there's no development, we just work on farms."

No white smoke in first round of Italy's presidential vote

US and Iran ready for direct nuclear talks