PHNOM PENH — A university student was killed in Cambodia and seven other people injured by an unexpected explosion during fireworks to mark the 10th anniversary of King Norodom Sihamoni's coronation. 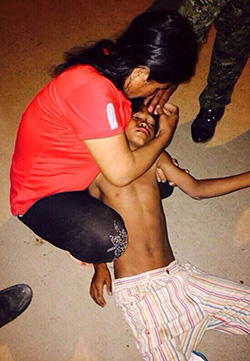 A Cambodian woman carries an injured boy after a firework exploded during a royal ceremony in Phnom Penh, Cambodia Oct 29. One person died and four were injured during the celebration of the 10th anniversary of coronation day of King Norodom Sihamoni. (EPA photo)

A firework canister exploded prematurely at about 7:20 pm on Wednesday, sending shards of shrapnel toward the watching crowds, local newspapers reported.

According to The Cambodia Daily, the 23-year-old victim died on the spot after being struck with a piece of flying metal.

Military police spokesman Kheng Tito said there had been a "technical problem," and that police were investigating, the Phnom Penh Post reported.