The Koh Samui Provincial Court on Wednesday rejected bail requests for the two Myanmar men accused in the murder of two British backpackers on Koh Tao in September.

Surprising Myanmar embassy officials, who had expected bail to be granted, the court ruled that Zaw Lin and Win Zaw Htun posed a serious flight risk because they are Myanmar migrants accused of serious crimes, Myanmar online news website The Irawaddy reported. 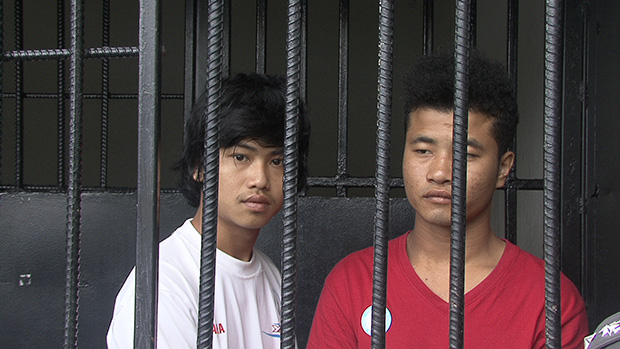 Zaw Lin and Win Zaw Htun, suspects in the murder of two British backpackers on Koh Tao in September, were denied bail Wednesday by Koh Samui Provincial Court. Myanmar embassy officials had prepared two million baht, expecting the request to be approved after prosecutors earlier stated they had no objections to it. (Bangkok Post photo)

"The court denied bail because they are accused in a serious crime case and because they are not Thai nationals," the news outlet quoted Htoo Chit, director of the Thailand-based Foundation for Education Development, which is part of the embassy's team aiding the 21-year-old suspects, as saying.

The bail request was the first for the two men, who are accused of the rape and murder of Briton Hannah Witheridge and the bludgeoning death of David Miller on Sept 15.

Andy Hall, an activist with the Migrant Workers Rights Network, posted on Twitter that the Myanmar government had raised two million baht - more than a third of which came from donations - and expected the two would be granted bail because prosecutors on Nov 20 stated they had no objections to it.

He said embassy officials expected bail to be set at somewhere between 500,000 and one million baht each.

Htoo Chit told The Irawaddy that the embassy team would now take their request to the Appeals Court, saying it had the "full support from the embassy and Myanmar's upper house speaker".

Upper House Speaker Khin Aung Myint visited Thailand on Nov 23-25 and met with Prime Minister Prayut Chan-o-cha. The speaker shared his concerns about the detention of the two suspects, who Mr Hall said had not even been let out of their cells until Nov 19.

On Nov 20 the Koh Samui court approved a fifth period of detention as prosecutors said they were still waiting for more evidence and findings regarding the Myanmar men's accusations of torture during police interrogation.

Surapong Kongchantuk of the Lawyers Council of Thailand said the embassy officials and the council LCT submitted the bail request at 11am. It was dismissed by the court in the afternoon.

"The suspects' detention has been extended five times despite there being no witnesses to their guilt. There are only the test results of DNA, semen and saliva claimed by police," he said.

"The suspects deny [the evidence] is connected to them,” he said. Mr Surapong said the arrest of the two men had become a huge issue, and the Myanmar embassy had taken up their cause in a way it had never done before.