JAKARTA - A powerful undersea earthquake rocked eastern Indonesia on Wednesday, causing fresh panic in an area that has been hit by a series of strong tremors in recent days. 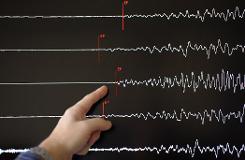 No tsunami warning was issued and there were no reports of casualties or damage after the quake, which the US Geological Survey said had a magnitude of 6.8 and was 41 kilometres under the Molucca Sea.

But people ran out of their homes in the city of Manado, on the northern tip of nearby Sulawesi island, where the quake was strongly felt.

"I was watching television when I felt the ground shake strongly," Hendra Pontoh, a resident of Manado, told AFP.

The initial quake was followed by three aftershocks measuring more than magnitude 5.0, said Jerisman Purba from the Indonesian meteorological agency.

The quake, which struck at around 10.30pm (9.30pm Thailand time), was the latest in a recent series of tremors under the Molucca Sea.

On Nov 15, a 7.1-magnitude quake sparked a tsunami alert and generated tiny waves, but did not cause any casualties or damage.

After Wednesday's quake, the Pacific Tsunami Warning Center said there was no threat of a tsunami and local authorities did not issue an alert. The USGS originally put the magnitude at 7.0.

A huge undersea quake in 2004 triggered a tsunami that killed more than 170,000 people in Aceh province, on western Sumatra island, and tens of thousands more in other countries with coasts on the Indian Ocean.