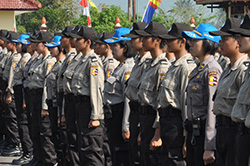 Home Affairs Minister Tjahjo Kumolo said Monday he was seeking an end to virginity tests as part of requirements to join the Institute of Public Administration, a college for aspiring civil servants and regional administrators, the Kompas Daily reported.

"A woman is not a virgin can be due to several reasons, such as a fall," Tjahjo was quoted as saying. "This should not be a measure."

"It is a pity that just because of that a woman fails to qualify, even though she is competent," he said.

New York-based Human Rights Watch said in a report last month that the police force required female applicants to undergo "degrading" virginity tests despite a promise to end the practice years ago.

The national police have denied they require applicants to undergo virginity tests, saying they administer reproductive organ examinations as part of health checks to detect diseases such as cervical cancer.

WASHINGTON: US President Joe Biden is monitoring unrest in China by protesters demanding an end to Covid lockdowns and greater political freedoms, the White House said Monday, as rallies popped up in solidarity around the United States.