Vietnam taking the lead in gay rights in Southeast Asia by abolishing a ban on same-sex marriage has medical doctor Thuan Nguyen planning a wedding ceremony with his boyfriend of two years.

"I am ready to have a wedding," he said. "Many, many young people in love are optimistic about the acceptance of gay weddings." 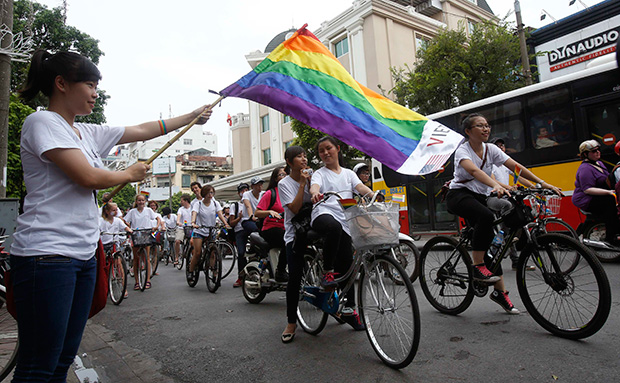 A supporter waves a rainbow flag of the LGBT community as participants pass by during a gay pride parade on a street in Hanoi Aug 3. Vietnam has taken the lead in gay rights in Southeast Asia by abolishing a ban on same-sex marriage. (Reuters photo)

"This makes Vietnam a leader in Asia," Jamie Gillen, a researcher of culture geography at National University of Singapore, said by phone. "Singapore just reaffirmed its ban on homosexual behaviours. Vietnam is trying to pitch itself as a tolerant and safe country."

Same-sex marriages can now take place, though the government does not recognize them or provide legal protections in cases of disputes. The government abolished fines that were imposed on homosexual weddings in 2013.

No other country in Southeast Asia has taken as big a step toward accepting same-sex marriage as Vietnam, Phil Robertson, deputy Asia director at Human Rights Watch, said by phone. 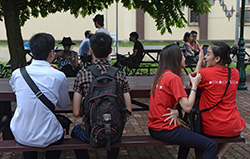 This picture from August shows some same-sex couples sitting in the compound of the American Club, the venue of the annual Vietnam Pride Parade party, in Hanoi. From flamboyant parades to symbolic same-sex weddings, taboos surrounding homosexuality — once viewed as a "social evil" — are quickly crumbling in Vietnam with the elimination of a ban on same-sex marriages. (AFP photo)

In Thailand, efforts to address same-sex laws have stalled since the ascent of the military government in May, while Cambodia, Burma and Laos have not put the issue on its legislative agenda, he said. The Philippines is considering laws to ban same-sex marriage. Indonesia and Malaysia have "entrenched discriminatory views" against homosexuals and in Brunei, "the new penal code sets out that those seeking to be involved in gay marriage could face whippings and long prison sentences," Robertson said.

Vietnam, which looks to boost an economy that has expanded less than 7% annually for seven consecutive years, reduced visa requirements for seven Asian and European countries Jan 1 to make the country more attractive to overseas tourists. Foreign visitors to Vietnam are estimated to have increased to 7.9 million last year from 7.6 million in 2013, according to government data.

"It is getting out that Vietnam is a more friendly place" toward gay people, John Goss, director of Utopia Asia, a gay-resources website based in Bangkok, said by phone. "Gays in Vietnam are certainly becoming more open. It has not ruffled any feathers as it might in some other countries in Southeast Asia. It will have a positive effect on tourism."

Vietnam is already seeing an influx of LGBT travellers from abroad, said Nguyen Anh Tuan, owner of Gay Hanoi Tours, which has seen bookings increase by as much as 50% in the past year.

The new law "indicates to everyone that Vietnam is opening up more and welcomes everyone," he said. "Vietnam is changing very quickly. There are bigger gay communities and gay events."

About 29% of the LGBT community in the US take at least five leisure trips a year, according to research by San Francisco-based Community Marketing Inc The community generates $100 billion in tourism business in the US alone and many make overseas trips, according to the company. About 48% of gay households have annual incomes of at least $75,000, it said in its 2014 tourism survey.

"Many of them have double incomes," Mr Goss said. "Gay travel tends to be recession-proof."

Vietnam's lawmakers, who initially considered recognizing same-sex marriage, believed the country wasn't ready for it, said Luong The Huy, legal officer at the Institute for Studies of Society, Economy and Environment in Hanoi, a Vietnamese non-governmental organization that advocates for minority rights.

"They say the society in Vietnam needs some time to accept gay and lesbians in general," he said. The revision in the law signals to the country that "same-sex marriage is not harmful to society," Mr Huy said.

Vietnamese perceptions of gays may also change with the December arrival of US ambassador to Vietnam, Ted Osius, along with his husband, Clayton Bond, and their son, Mr Huy said.

"He promotes a very good image of a very successful person who is gay," Mr Huy said. "We could get more support from civil society in Vietnam because the American ambassador is gay."

Vietnam's leaders allow gay organizations to be established and last year permitted a gay pride bicycle ride with rainbow flags in Hanoi, even as the government cracks down on political dissent, Robertson said. More than 150 Vietnamese dissidents are in detention, according to Human Rights Watch.

Granting gays more freedoms is a way to blunt a bad human rights record, Joerg Wischermann, a researcher at the German Institute of Global and Area Studies, said in an e-mail.

Nonetheless, Vietnam's marriage law revision "is something extraordinary in a region in which many countries have deeply conservative societies," he said.

Mr Nguyen, 43, the Hanoi doctor, said gay Vietnamese want to push for the legal rights marriage confers on citizens. When a gay couple ends their relationship, or if one were to die, there is no legal framework for how to split assets, he said.

"The government doesn't have problems with equal marriage," Mr Nguyen said. "It doesn't have to do with the political system. This is determined by public opinion."