Refugees pass the time in a monastery in Lashio, where they have fled to escape fighting between the Myanmar army and rebels in the Kokang region of northeastern Myanmar. (Reuters Photo)

NAY PYI DAW — The government of Myanmar says that former Chinese soldiers recruited as mercenaries are among those supporting ethnic Kokang rebels in deadly fighting against government troops.

Lt Gen Mya Htun Oo, chief of military affairs security, made the claim on Saturday as a broader spectrum of ethnic rebel groups issued a statement of moral support for the Kokang.

Addressing the first news conference since the clashes began, he said the conflict had killed 61 military and police officers and around 72 insurgents so far.

"The fighting is strong. ... Because of serious fighting, our helicopters are helping," he told reporters in the capital Nay Pyi Daw. "We will not retreat until we get stability." 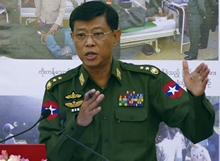 Lt Gen Mya Htun Oo did not provide figures on civilian deaths in and around Laukkai town, where the conflict has centred, as efforts to evacuate communities remain hampered by an attack Tuesday on a local Red Cross convoy which wounded two aid workers.

The United Nationalities Federal Council (UNFC) said the Kokang, who occupy a special region in Myanmar near the Chinese border, shared the group's demand for greater autonomy from the central government.

The UNFC urged the government to make peace with the Kokang through current multilateral negotiations that participants hope will lead to a political settlement with all the groups.

Mya Tun Oo said the Kokang were now retreating after two weeks of combat in which other minority rebel groups had joined in the attacks on government forces.

Myanmar has blamed Kokang rebel leader Phone Kya Shin for the upsurge of violence — after six years of relative peace — and called on Beijing to rein in any local officials who might be helping the group on its side of the border.

The conflict flared up on Feb 9 when ethnic Kokang rebels killed nearly 50 government soldiers during a series of attacks on the town of Laukkai.

At least 30,000 people have fled into China, prompting Beijing to call for an end to the clashes. A similar number of people are believed to be displaced within Shan State, but clear estimates are hard to obtain as local aid groups have limited operations after a Myanmar Red Cross convoy came under fire.

The army struck back against the rebels with air strikes and ground forces, after apparently being caught flat-footed by the pace and ferocity of the initial rebel assault.

The conflict has renewed doubts over a government attempt to forge a nationwide ceasefire in a country peppered with bitter ethnic insurgencies.

The Kokang, who are mainly ethnic Chinese, have been joined by other nearby rebel groups, including the Ta'ang National Liberation Army and the powerful Kachin Independence Army, an ominous sign for peace as the country heads toward a general election later this year.