New ambassador seeks to bolster ties with US
Thailand
General

New ambassador seeks to bolster ties with US

New ambassador to Washington Pisan Manawapat (inset) has a written plan to bolster ties with its oldest treaty partner. Photo from November, 2012, shows a Government House worker hoisting a US flag in preparation for US President Barack Obama’s visit to Thailand. (Photo by Chanat Katanyu)

Thailand's newly appointed ambassador to Washington DC, Pisan Manawapat, aims to improve ties with the United States during his tenure.

"This is one of two urgent tasks," Mr Pisan told the Bangkok Post in a telephone interview from Washington DC Monday. The other urgent task is to help upgrade Thailand's position in the US State Department's annual Trafficking in Persons Report.

Although ties with the US have cooled recently, especially after the visit of Assistant Secretary of State Daniel Russel late last month, Mr Pisan said it is still important to show Thailand is a dependable partner in areas of US interest in the region. 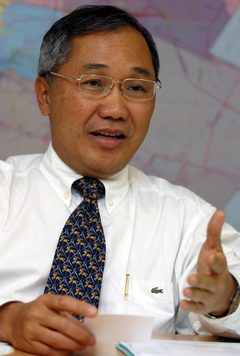 New Ambassador Pisan Manawapat: Only with democratic rule, without major flaws of the recent past, will Thailand be able to emerge stronger.

During his visit to Thailand, Mr Russel expressed concern about political fairness, freedom of expression and martial law in the country. He also said the impeachment of former prime minister Yingluck Shinawatra could be perceived as being politically motivated as she was removed from office and deposed by the same authorities that conducted the coup against her government.

Mr Pisan held a meeting with Mr Russel and other officials soon after his arrival in Washington DC on Feb 13.

Mr Pisan also met US President Barack Obama Monday night (Thailand time) to present his credentials. Prior to meeting Mr Obama, he submitted written remarks to the State Department, which will forward them to the White House.

In his remarks, the ambassador said: "As the US's oldest treaty ally in Asia, our relationship has grown from strength to strength and today it encompasses a wide range of areas, including security and defence, trade and investment, science, technology, social and people-to-people connectivity."

In spite of the "unfolding domestic political developments" in Thailand, the country is committed to sharing strong values with the US, such as democracy, respect for the rule of law and human rights, humanitarianism, and an open economy, he said.

"We take note of your view that democracy needs to be returned to Thailand quickly. We are proceeding along the path set out in the announced roadmap and implementing necessary reforms to prevent the country from sliding back to the state of political paralysis, government dysfunction, rampant corruption, and disregard for the rule of law.

"The process of drafting, conducting consultations and hearings on, and enacting the new constitution will be completed by September this year. Subsequently, multi-party elections are expected to be held by early next year.

"Our goal is to get Thailand back on a more solid path toward a sustainable and functioning democracy, with good governance, transparency and accountability. These steps and goal deserve understanding and support from international friends, especially the United States."