Myanmar needs to treat Rohingya as citizens — US
World

Myanmar needs to treat Rohingya as citizens — US

US expects Myanmar to land migrant boat on Wednesday

US Assistant Secretary of State Anne Richard (centre) is accompanied by Aceh culture director Malik Mahmud (left) and US Ambassador Robert Blake (right) as she delivers her statement after meeting Rohingya migrants from Myanmar and Bangladesh during a visit to the confinement camps for Rohingya and Bangladesh migrants in Kuala Cangkoi in Indonesia's Aceh province on June 2. (AFP photo)

JAKARTA — The United States said Myanmar's government should treat minority Rohingya Muslims as citizens to solve the root cause of the migrant crisis in Southeast Asia, and called on Wednesday on all Myanmar's leaders to speak up on human-rights issues.

US President Barack Obama has sought to make Myanmar's transition to democracy a legacy of his presidency, and Washington is stepping up pressure on the country to tackle what it sees as the underlying causes of an exodus of "boatpeople" across the Bay of Bengal that the region has struggled to cope with.

Many of the more than 4,000 migrants who have landed in Indonesia, Malaysia, Thailand and Myanmar since the Thai government launched a crackdown on people-smuggling gangs are Rohingya who say they are escaping persecution.

Myanmar does not recognise its 1.1 million-strong Rohingya minority as citizens, rendering them effectively stateless. Many have fled the apartheid-like conditions of the country's Rakhine state. Myanmar denies it discriminates against them.

"Rohingyas need to be treated as citizens of Burma," US Assistant Secretary of State Anne Richard told reporters at a press briefing in Jakarta, using the country's former name.

"They need to have identity cards and passports that make clear they are as much citizens of Burma as anyone else."

Obama said on Monday that Myanmar needed to end discrimination against the Rohingya people if it wanted to succeed in its transition to a democracy.

Politicians in Myanmar were focused on a historic general election scheduled for November, Ms Richard said, which was hindering political discussion of the status of the Rohingya. 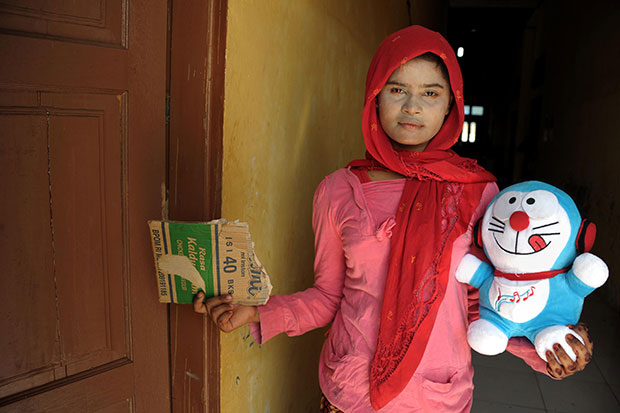 A Rohingya migrant woman from Myanmar stands at the entrance of a living quarters during a visit by US Assistant Secretary of State Anne Richard at the confinement camp for Rohingya and Bangladesh migrants in Kuala Cangkoi in Indonesia's Aceh province on June 2. (AFP photo)

Images of desperate people crammed aboard overloaded boats with little food or water has focused international attention on the region's latest migrant crisis, which blew up last month after the Thai crackdown made it too risky for people smugglers to land their human cargo, who were instead abandoned at sea.

Ms Richard said she would like to see all Myanmar's political leaders address the issue. Opposition leader and Nobel Laureate Aung San Suu Kyi has faced international criticism for failing to speak out on behalf of the nation's many ethnic groups, including the Rohingya.

"We would love to see all Burmese leaders speak up on human rights and to realise that they should help the Rohingya," she said. "The boats are not going to wait until December -- the people on the boats need help right now."

Ms Richard said that, on a previous visit to Rakhine state, she found "one of the most oppressive atmospheres I've ever travelled in".

At an international meeting on the migrant crisis in Bangkok on Friday, Myanmar bristled when the United Nations raised the citizenship issue and when other delegates blamed the country for the problem.

"You cannot single out my country," said Myanmar's head of delegation Htein Lin.

Ms Richard said that the United States was not considering imposing sanctions on Myanmar over the issue, but that sanctions were always "in the diplomatic toolbox".

Mr Obama has invested significant personal effort and prestige in promoting democracy in Myanmar, which emerged from 49 years of military rule in 2010, travelling there twice in the past three years.

The US president said in a routine note to Congress last month that Washington -- while not curtailing engagement with Myanmar -- would maintain some sanctions on the country.

"We really hope we are working with a Burma that is on a path to being a more responsible member of the international community," Ms Richard said. 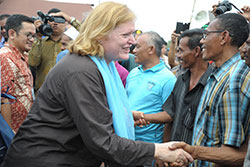 US Assistant Secretary of State Anne Richard (centre) accompanied by local officials, UNHCR and IOM staff meet a group of Rohingya migrants from Myanmar during a visit at the confinement camps for Rohingya and Bangladesh migrants in Kuala Cangkoi in Indonesia's Aceh province on June 2. (AFP photo)

Ms Richard attended the talks in Thailand on Friday and has also visited Malaysia and Indonesia, where she met some of the migrants who have come ashore. She said she had seen "some of the best and the worst of humanity" during the crisis.

Ms Richard said she expected Myanmar to bring a boat holding more than 700 migrants to land on Wednesday. Myanmar's navy intercepted the boat, overloaded and taking on water, on Friday but has kept it offshore since then.

Around 800 Bangladeshis were among more than 1,800 migrants who landed in Indonesia's Aceh in May, Thomas Vargas, the representative to Indonesia for UN refugee agency UNHCR, told reporters at the same press briefing on Wednesday.

Vargas reiterated a UN estimate that around 2,000 people were still at sea and said the first priority for nations involved in the crisis and for international organisations should be to save lives.