A Cambodian museum employee attaches a wooden block to the head of the Harihara statue at the national museum in Phnom Penh on Jan 19. A French museum has returned the statue head of a Hindu god that was ransacked from a Cambodian temple 130 years ago. (AFP photo)

A French museum has returned the head of a statue of a Hindu god that was taken from a Cambodian temple 130 years ago, the Culture Ministry said Tuesday. 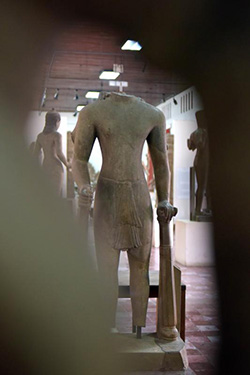 The decapitated statue of Harihara is displayed at the national museum in Phnom Penh on Jan 19. (AFP photo)

The head of the Harihara statue, a combined representation of the Hindu gods Vishnu and Shiva, was returned by France's Guimet Museum on Saturday at the kingdom's request, according to Thai Noraksathya, a spokesman for the Ministry of Culture.

"The head and the body of the statue had been separated for 130 years," Mr Noraksathya told AFP. "When the head is reattached to its body, it is like we are reconnecting the soul of our national heritage."

He said the statue's head was removed from a temple in southern Takeo province during the French colonial period and shipped to Europe in 1886.

Cambodia is hunting down its lost artworks and statues in a bit to retrieve valued historical artefacts.

Museums in the United States have returned several ancient statues in recent years, following negotiations and some legal battles.

Mr Noraksathya said the restored Harihara statue will be presented to the public during a ceremony at the national museum on Thursday.

The full statue could also be taken for display in France in the future, he said, where there are still a number of other pieces of ancient Cambodian artwork.