Chief executive Suwat Thongrompo plans to expand its cinema business into Cambodia, Laos, Myanmar and Vietnam over the next two years in a bid to sustain long-term growth.

Chief executive Suwat Thongrompo said the company was conducting a feasibility study for opportunities in these markets and approaching several local investors for partnerships.

The expansion would be under its own investment or joint-venture schemes.

"These countries have only a limited number of cinemas," Mr Suwat said. "We're ready to go there if we can find the right partner and the right location." 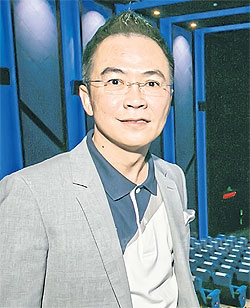 SF president Suwat says movies are one of the cheapest forms of entertainment.

Chief operations officer Suvit Thongrompo said negotiations with potential partners were "50% in progress", while business laws in some of the countries allowed operators to use more space for cinemas.

Cambodia, Myanmar and Vietnam are the three priority markets, followed by Laos.

The investment cost is 15 million baht per standard screen in these countries.

SF expects to open 8-10 screens in capital cities and three or four in other major cities.

At home, SF will spend 800 million baht to expand its business this year -- 600 million to open five new cinemas and 200 million to renovate its existing ones in MBK and CentralWorld shopping centres.

SFX Cinema in The Crystal Ekamai-Ramintra will be the first of the five, costing 200 million baht and featuring eight screens and 1,450 seats.

This will be followed by cinemas in Big C Bang Phli in Samut Prakan, CentralPlaza and Terminal 21 shopping centres in Nakhon Ratchasima and Robinson Department Store in Lop Buri.

With the expansion, the company expects revenue growth of 25% to 5 billion baht this year.

"Even economic downturn has no affect on the cinema business, as watching movies is one of the cheapest entertainments," Mr Suwat said.

"And this year, there's a strong line-up of Hollywood blockbusters."

Mr Suwat said SF was waiting for a good time to file a listing proposal with the Securities and Exchange Commission.

The stock market listing will raise its image to be more international, he said.

SF expects to raise 2-2.5 billion baht in funds to pay off debt and expand further.