NAY PYI TAW - Aung San Suu Kyi was formally ruled out of the running to become Myanmar's next president Thursday, as her party nominated one of her most loyal aides to rule the formerly junta-run nation as her proxy.

Ms Suu Kyi has vowed to rule "above" the president, despite being barred from the top office by an army-scripted constitution.

Many in Myanmar had clung to faint hopes that the 70-year-old democracy campaigner could still head the country's first civilian government in decades, but months of talks with the powerful military failed to remove the legal obstacles in her way.

He is widely seen as the anointed person to rule in her place as president when incumbent Thein Sein ends his five-year term at the end of the month.

The announcements end months of fevered speculation, as the party kept tight-lipped to avoid upsetting a delicate political transition in a nation where the military still casts a long shadow.

Ms Suu Kyi spoke to MPs in Nay Pyi Taw late last night at a closed-door meeting that was partially overheard by throngs of journalists outside.

"I believe people will like our chosen presidential nominees," she said.

"I think he's probably the best fit for the job, someone of proven and longstanding loyalty to [Ms Suu Kyi] and also a person of considerable standing in his own right," Myanmar historian and political analyst Thant Myint-U said.

Myanmar's next government faces soaring expectations in the country of 51 million eager to see further changes as it shakes off the shackles of junta rule and international isolation.

"This is an important step in implementing the desires and expectations of voters who enthusiastically supported the NLD," Ms Suu Kyi said in a statement.

Htin Kyaw's official confirmation may take days, though should be a forgone conclusion because of the NLD's comfortable parliamentary majority.

Parliament's lower and upper houses will confirm one candidate each on Friday.

Their eligibility will then be assessed by a parliamentary committee before a final vote possibly next week that will also include a nomination from the military, which controls a quarter of the legislature.

This will determine the president, leaving the other two as vice presidents.

Even MPs from the army-backed United Solidarity and Development Party seemed to accept Htin Kyaw.

"I think personally that he is a suitable person," USDP lower house MP Hla Htay Win said, adding that the party's own nominees "have their abilities".

Myanmar's democracy movement runs in the family for Htin Kyaw, an affable former schoolmate of Ms Suu Kyi's, who stood at her side when she was released from house arrest in 2010 and was once her driver.

His father was a legendary writer and he is married to sitting NLD MP Su Su Lwin, whose late father was the party's respected spokesman.

Neither Htin Kyaw nor his wife attended parliament Thursday.

Ms Suu Kyi, barred from top political office because she married and had children with a foreigner, has not outlined what her future role will be.

After the new government is formed, the country is expected to gear up for economic development to integrate into the Asean Economic Community, which has officially started, Ms Pagaimas said.

ANALYSIS: For Suu Kyi and her proxy, what now?

Htin Kyaw, a former driver for Aung San Suu Kyi and a close friend, was nominated to be Myanmar's first civilian president in decades.

He will act as a proxy for Ms Suu Kyi who is barred from the presidency by the military-drafted constitution because she has foreign-born children.

So what now for Ms Suu Kyi and the impoverished but hopeful nation she plans to lead from behind the scenes?

Htin Kyaw has been nominated but still needs to be assessed for suitability by the same constitution that bars Ms Suu Kyi and then voted into office by Myanmar's two legislatures over the coming days.

Barring last minute upsets, that vote should be a forgone conclusion — both houses are comfortably dominated by Ms Suu Kyi's party.

He will take over from outgoing army-backed president Thein Sein on March 31.

In the meantime, Ms Suu Kyi will pick her cabinet and her government will start operating in earnest from early April.

Ms Suu Kyi has yet to say. Some compare the situation with that of India's Sonia Gandhi, who wielded huge influence over her Congress party's administration despite having no official government role. 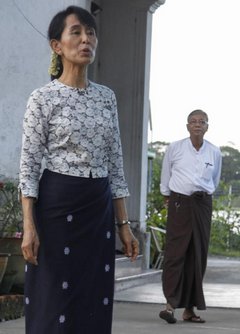 Htin Kyaw, right, looking on as Aung San Suu Kyi talks to an interviewer at her residence in Yangon, Myanmar, in July 2011. (EPA photo)

Another example is Singapore's Lee Kwan Yew, who held an advisory position in the cabinet long after his official retirement.

Ms Suu Kyi is expected to be president in all but name, possibly taking the foreign minister's post, which would mean relinquishing her party position, but on the other hand, would give her a seat at the country's military-dominated Security Council.

There are other pitfalls. The military may decide her proxy president goes against the constitution.

And a puppet leader may not be 100% compliant as Sonia Gandhi often discovered.

Far from it. It is difficult to overstate just how monumental both November's polls and the so far peaceful transition of power are in a country battered by decades of corrupt and brutal junta rule.

But Myanmar's military is far from a spent force because the constitution ensures it retains significant power.

A quarter of parliamentary seats are reserved for unelected soldiers, while the military will retain a vice president and control of three crucial ministries: home, defence and border affairs.

The generals also oversee the National Defence and Security Council, a body which can seize power in times of national emergency, and also runs two huge business conglomerates.

The NLD has provided few policy details beyond a broad campaigning slogan of "change".

But the challenges are both numerous and complex.

Myanmar remains one of Asia's poorest countries, blighted by cronyism, corruption and a woeful lack of investment during the junta years with education and health especially underfunded.

Many of its ethnic minority border regions are still wracked by insurgencies and Ms Suu Kyi has said securing a countrywide peace deal will be a priority.

But it is unclear how much say the NLD will have on pushing a peace process that will require cooperation from the still-powerful army.

Never say never. Ms Suu Kyi has always maintained that she intends to overturn the ban. However, doing that will be no small feat.

In the immediate months after the election she held meetings with Myanmar's army chief to build trust.

But it soon became apparent those talks made little headway in changing the constitution before the presidential nominees were announced.

Constitutional changes need the approval of more than three quarters of both legislatures. But in a system where the military is guaranteed a quarter of parliamentary seats, they have a de facto veto.

Ms Suu Kyi has said she needs "one brave soldier" to cross the aisle to support her cause.