LOURDES (FRANCE) - A French cardinal on Tuesday denied accusations he covered up the sexual abuse of children amid a growing scandal that has deeply embarrassed the Catholic Church in France. 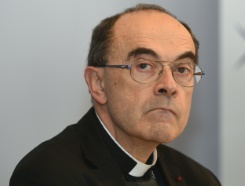 Roman Catholic Cardinal Philippe Barbarin, Archbishop of Lyon, during the Conference of Bishops of France in Lourdes, on March 15, 2016

Even the fiercely secular French government weighed in, with Prime Minister Manuel Valls urging Cardinal Philippe Barbarin, the archbishop of Lyon, to "take responsibility" in the case.

"I have never, never, never covered up acts of paedophilia," Barbarin retorted during a news conference in Lourdes, a major Catholic pilgrimage site in southwestern France where the country's bishops were meeting.

Barbarin has been caught up in the scandal over abuses that took place 25 years ago, long before he became archbishop of Lyon in 2002.

A priest in his diocese, Bernard Preynat, was charged in January after victims came forward with claims he had sexually abused Scouts between 1986 and 1991.

The victims have filed complaints against several senior diocesan officials, including Barbarin, accusing them of failing to report the priest or remove him from duty despite being aware of his past.

Barbarin said that when learned of the priest's past in 2007, he immediately called a meeting with him.

"Firstly I said 'How is such a thing possible?'. He said, 'There's no point explaining it, you wouldn't understand," Barbarin told journalists.

He then asked Preynat if he had committed further abuses since 1991 and the priest swore he had not. Barbarin said no accusations had been made since.

"You can reproach me for having believed him... but covering up means knowing and letting it happen. Absolutely never," he said.

Accusations were made against Preynat only when a victim who was allegedly abused in the 1980s realised in 2015 that the priest was still in service.

The diocese removed Preynat in May 2015. When complaints were first made against him in the 1980s, he was merely suspended for a few months.

The case recalls the recent Oscar-winning film "Spotlight", which highlighted how the Church would transfer deviant priests between parishes in Boston in the United States.

While this practice is no longer commonplace, the French case raises the question of how deep Church authorities should dig into abuse cases lurking in their past.

"I know what must be done on current cases. But what to do with these old cases?" Barbarin asked during the news conference.

The Vatican has backed the cardinal, saying he had shown "a great deal of responsibility".

However the media attention drew fresh accusations against Barbarin.

A 42-year-old man revealed he has pressed charges against Barbarin for failing to act in 2009 when the cardinal learned that he had been abused at the age of 16 by another Lyon priest.

Barbarin told journalists that both cases had passed the statute of limitations for legal action when he learned of them -- adding the phrase "thank God", which provoked even more outrage.

"Now we are bordering on pathetic," said Bertrand Virieux, a spokesman for the victims' group that is suing the cardinal.

He added that even more cases could come to light in the coming days.

- 'The culture has really changed' -

The scandal has been extremely embarrassing for the Church in France, which has worked to harden its stance against predator priests since Pierre Pican, bishop of the Normandy town of Bayeux, was convicted in 2001 for failing to report abuse.

The Catholic Church continues to be dogged by cases of paedophile priests and past cover-ups, despite Pope Francis' promise of a crackdown.

Barbarin's case, as well as a scandal in Australia that has seen Vatican finance minister Cardinal George Pell accused of protecting predator priests, have been used to illustrate that a culture of silence persists.

But Le Figaro daily argued that decades-old abuse cases do not necessarily reflect how the Church reacts today.

"Most dioceses in the world now get rid of any accused priest... The culture has really changed in the Church," an editorial read.