BRASíLIA - Brazil's outbreak of Zika -- which has been linked to the devastating microcephaly birth defect in newborns in 1,271 cases since October -- has also killed 57 of those babies, authorities said Wednesday. 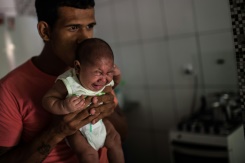 Brazil's Health Ministry said that as of April 30, 2016, 3,580 suspected cases of microcephaly had been reported and that another 2,492 were ruled out as false alarms

The Health Ministry said in that as of April 30, 3,580 suspected cases had been reported and that another 2,492 were ruled out as false alarms.

While 57 babies were known to have died of the condition, another 178 deaths were suspected to have been caused by it, the data showed.

Brazil, the epicenter of the mosquito-borne Zika virus outbreak, hosts the 2016 Games in Rio de Janeiro from August 5 to 21.

The virus is blamed for birth defects in babies born to women infected with the virus.

Despite a flurry of research, very little is known about the virus -- how long it can hide out in the human body, the degree of risk via sexual transmission, the full list of diseases and disorders it may cause, and all the mosquito types capable of transmitting it.

The recent scientific consensus is that Zika causes microcephaly, a form of severe brain damage in newborns, and adult-onset neurological problems such as Guillain-Barre Syndrome, which can cause paralysis and death.

There is no vaccine or treatment for the virus, which in most people causes only mild symptoms -- a rash, joint pain or fever.

Largely contained to Latin America and the Caribbean, Zika's range is likely to expand as summer arrives in the northern hemisphere -- and with it virus-transmitting mosquitoes.