Local demand for electric vehicles (EVs) are set to surge in the near future, thanks to the new preferential excise tax rates aimed at promoting EV development, says the Federation of Thai Industries (FTI).

At present, there are four types of electric vehicles. HEVs and PHEVs were developed first, with two systems: electricity/petrol and electricity/diesel. 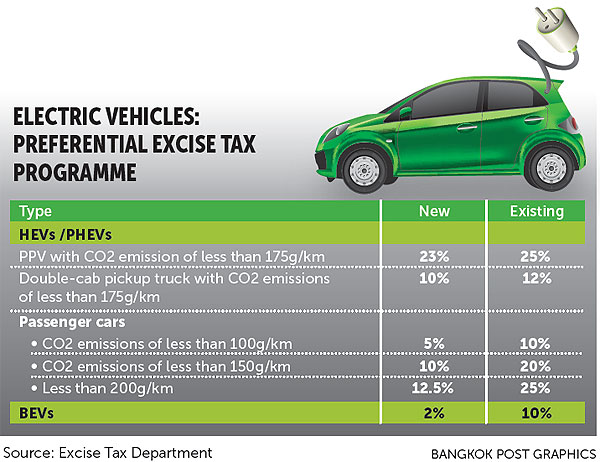 EVs are among the government's 10 targeted industry clusters, as Thailand is one of the world's biggest manufacturing bases for the automotive industry.

The government announced the new excise tax incentives in the Royal Gazette on Tuesday.

Under the next tax regime, the excise tax for the HEV and PHEV passenger cars under a Board of Investment (BoI) promotion will be cut from a range of 25% to 5% based on CO2 emission, while BEVs will be taxed 2%, a sharp drop from 10%.

Passenger pickup vehicles (PPVs) and double-cab pickup trucks that release CO2 at less than 175 grammes per kilometre under the HEV platform will be taxed at 23% and 10% from 25% and 12% respectively.

However, this tax privilege will be given only under government measures to promote EV production locally which are due to expire in late 2025.

In March this year, the BoI approved promotional privileges for EVs, including tax holidays of 5-8 years.

The privileges will focus on production of three types of electric cars: HEVs, PHEVs and BEVs.

The promotion will include passenger cars, pickup trucks and buses, with different rates of privileges based on production technology.

The board also agreed to add 10 more important EV parts that will enjoy corporate income tax exemption for eight years.

Investment in those items will garner additional privileges and a 50% cut on corporate income tax for another five years if the manufacturers establish their factories in the Eastern Economic Corridor and submit their applications by Dec 29.

In a related development, the FTI's Automotive Industry Club reported yesterday that car production output in May increased by 0.65% year-on-year to 169,495 units, with car sales last month rising by 0.6% to 66,422 units.