Runners hit the road at Chang International Circuit, the starting point of the Buriram Marathon.

Wake up at 3am, pin a bib on a singlet, tighten shoelaces and flock to the starting grid before sunrise.

These activities are uncommon for everybody except running fans, a group that is snowballing with every passing year.

While Thailand is perceived as a destination for mass tourism, there are attempts by the government and the private sector to catch more lucrative segments by targeting groups with special interests.

Sports tourism is among the top three of nine tourism experiences that the Tourism Authority of Thailand (TAT) is promoting. Sports enthusiasts are graded as a quality segment because this group has to make allowances for extra expenditure apart from basic facilities.

Even so, among the 2,000 races across Thailand each year, not every event can attract international runners.

The most prestigious two events, the Bangsaen21 and the Buriram Marathon, are accredited by World Athletics, formerly known as the International Association of Athletics Federations.

Other events have been certified with a different standard.

Last year, all running events drew 25,000 international participants to the country. This year, the TAT expects an increase to 28,000 foreign runners.

Apart from the silver-label Bangsaen21 and the bronze-label Buriram Marathon, the government will push the Amazing Thailand Marathon as a magnet, as it is ranked among the top 20 marathons in which top-seeded runners wish to participate.

But Mr Yuthasak acknowledged that a sticking point is mutual understanding between organisers and communities in the race area. Running events can interfere with the daily lives of locals and cause inconvenience when streets have to close. 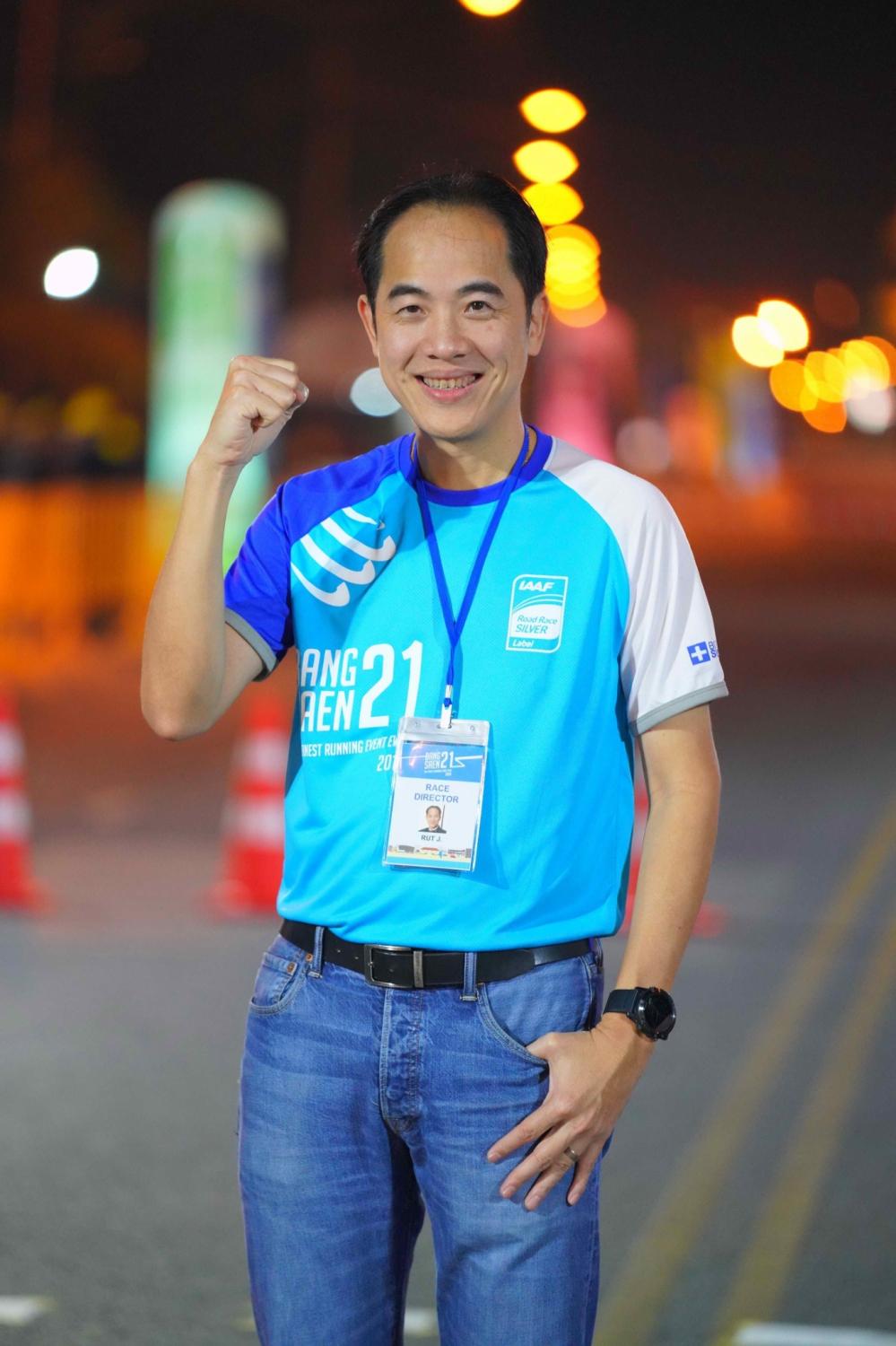 Mr Rut says running tourism is hampered by a lack of promotion and limited public transport near race sites.

The appropriate path is to persuade locals to take part and understand the mutual benefits that go beyond communities.

"We should integrate the collaboration between all stakeholders to make the events grow to a global scale like the Chicago and New York marathons, with the race becoming a part of the culture," Mr Yuthasak said.

To make the marathon events a real booster for the tourism economy, prestigious labels alone are not enough to keep up Thailand's reputation in the long run.

This year, the Bangsaen21 expects to be the first half-marathon race in Southeast Asia to be awarded the gold label after being certified as silver label last year, said Rut Jiroajvanichakorn, managing director of MICE & Communication, the company that stages the Bangsaen21 and Bangsaen42 races.

In addition, Thailand will sneak into the top five of half-marathon races in Asia, alongside Japan, China, India and the United Arab Emirates.

The award-winning organiser plans to achieve gold labels in every distance (42.2km full marathon, 21.1km half marathon, 10km race) by 2022 to realise the dream of becoming the region's running hub.

The ultimate goal is to make Thailand the most preferred running destination, with more than 10 road race labels in the future.

This strategy will help build on the growing number of international runners and quality tourists in Thailand.

Runners from China and India are potential markets that Mr Rut is focusing on. To reach out to these two markets, he is putting his faith in influencers and bloggers.

"The Bangsaen race series is the only marathon event in Thailand that organises three different races based on distance from November to January," he said. "So the world-famous events can help promote tourism in Bang Saen and Saen Suk municipality, which is considered a second-tier city in Chon Buri province."

Mr Rut notes several flaws of tourism that he has encountered, such as insufficient tourism information, especially in Chinese search engines, and scarcity of tourism campaigns during the events.

Seamless transport is also needed to move participants, since many events have limited public transport services and car parking areas. 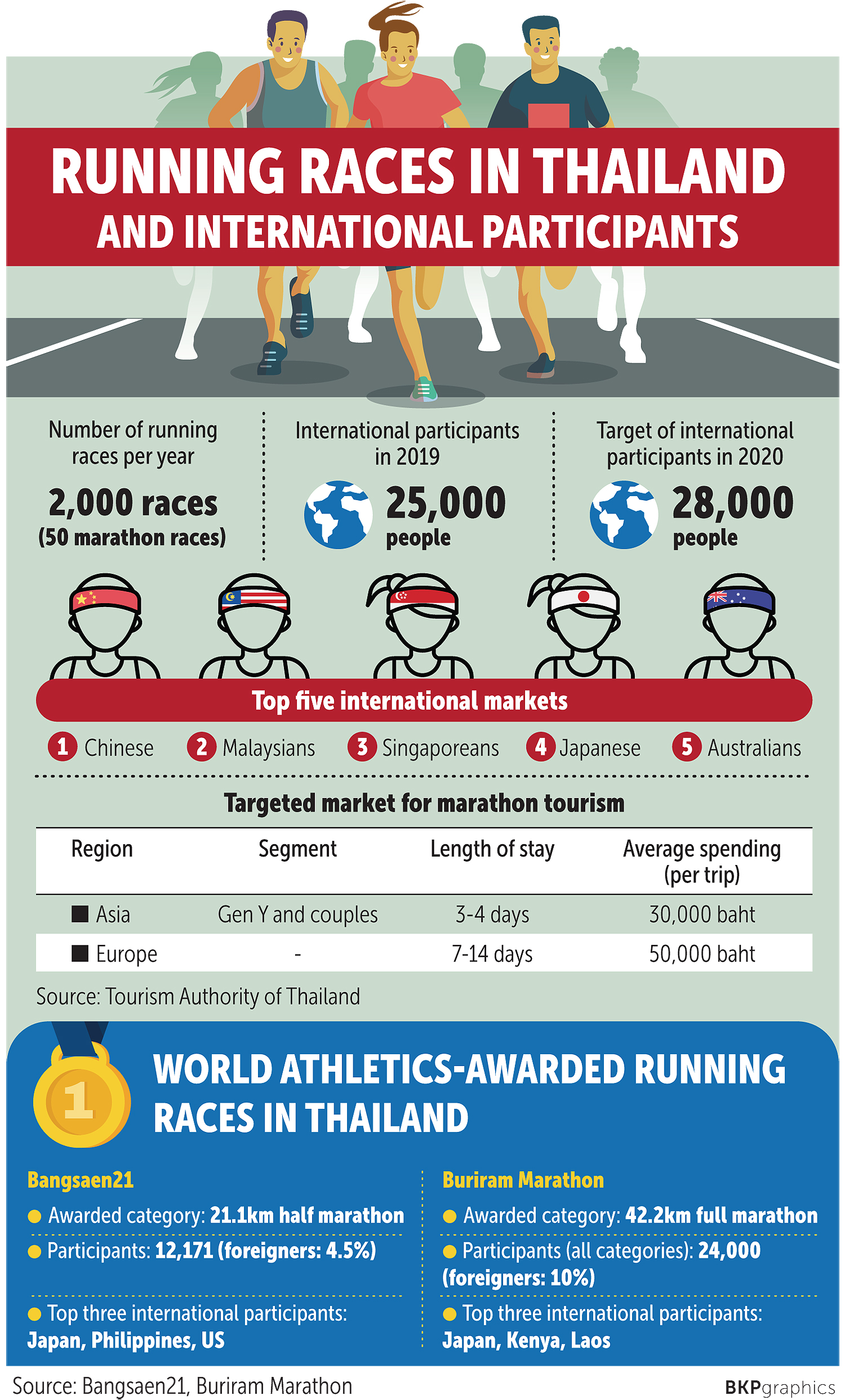 Tanaisiri Chanvitayarom, managing director of Chang International Circuit, said cooperation from every related sector is the key to providing successful and standardised events.

Speaking as the organiser of the Buriram Marathon, he said events that require 100% road closure must create better understanding with local people to make them feel that they're part of the activity. The willingness to participate and cheer runners during the race makes for a livelier marathon.

Mr Tanaisiri said marathon organising is a challenge because of the large number of participants (20,000-30,000), requiring a higher level of integrated management when compared with other sports like football.

The Buriram Marathon was awarded a bronze label for the 42.2km full marathon in 2019, and it expects to be submitted for a gold label by 2021.

As World Athletics has announced a new platinum label, Mr Tanaisiri said the Buriram Marathon is poised to reach that highest rank. He's currently studying the new regulations to prepare the event for the ultimate goal.

"Buri Ram may not have beaches or mountains, but the province can boost the number of visitors by hosting famous sport events such as the MotoGP event or football tournaments to encourage tourists to explore this destination," he said.

Tourists who attend races -- whether as runners, family members or spectators -- have to spend on accommodation, food and drink, transport, souvenirs and other tourist activities.

The Buriram Marathon generates more than 500 million baht for the province. Average spending is 3,000 baht per person, and 30,000 runners will stay at least two days and one night.

Chaiwat Tamthai, director of the TAT's Buri Ram office, said Buri Ram has been decorated as a "sports city" by the Tourism and Sport Ministry, with international sporting events queued up all year.

Available hotel rooms number 6,000-7,000, excluding homestays. The TAT is promoting Surin, 50km away, as alternative accommodation for a combined total of 10,000 rooms.