Virus a plus for online sellers
Business

The ongoing coronavirus outbreak could lead to the increase in online shopping among Thai customers for fear of contracting the illness in public, according to Facebook Thailand.

Meanwhile, a new study by Facebook and US-based consultancy Bain & Company shows that Thailand’s online spending could reach US$21.4 billion in 2025, a jump of almost five times from 2018.

“We are facing an uncertain situation from the virus outbreak,” said John Wagner, country director of Facebook Thailand, the local operating unit of the social media giant.

“If people aren’t leaving Thailand to travel elsewhere, and if they are not leaving their homes, then a lot of the transactions that they would be doing in offline locations are happening online. And that may be an opportunity for changing consumer behavior, which could be an important outcome of this situation.”

According to Mr Wagner, the outbreak is causing some disruption to the Chinese supply chain and having an impact on social commerce, or online merchants selling products via social media.

“We know that some companies are experiencing problems with supply chain. We see a little bit of impact but it isn’t dramatic,” said Mr Wagner.

He said it remains unknown whether businesses which do not have supply chain issues would reduce marketing spend.

“We’re not seeing that in a significant way today and I think it really depends on how the situation continues to unfold,” Mr Wagner said.

Thailand is the second-largest online shopping market in Asean, trailing only Indonesia.

In 2018, Thailand’s digital consumer population — defined as those aged 15 and older with at least one online shopping experience — was 34 million or 60% of the country’s population, up from 21 million in 2017.

“The emerging middle class is the next wave of online spenders,” Mr Derek said.

Some 55% of Thais learn about new products via platforms like Facebook and Instagram, so brands need to make sure their targeted customers see their products on these platforms.

The study found that buyers are likely to spend three times more on products they’re loyal to, he said.

Even so, Thais are open to new brands, Mr Wagner said, as 60% of the respondents said they had tried an online store despite never having heard of the brand. 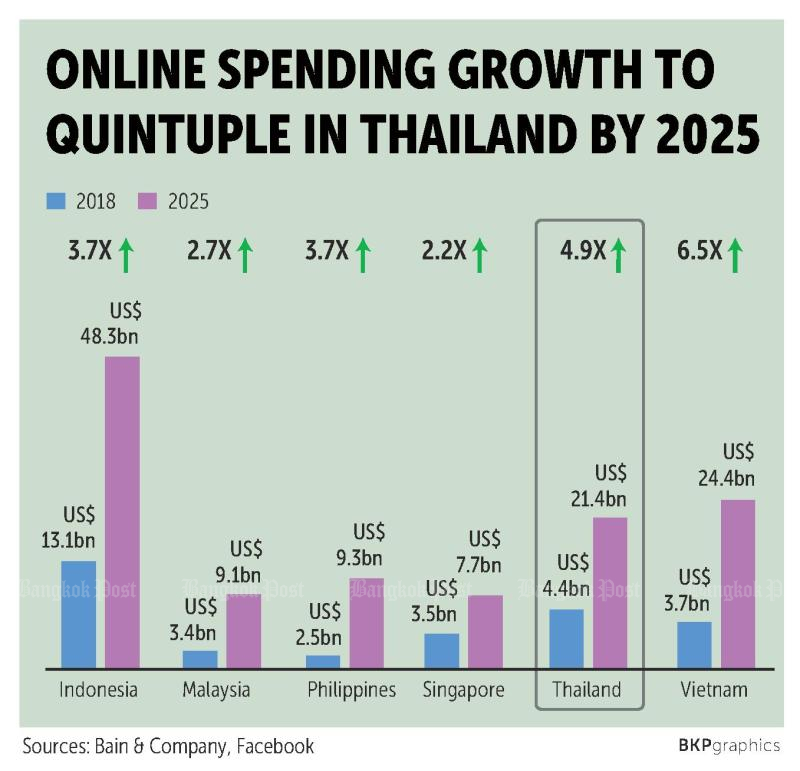