Possibility from 2-3 months of pandemic

Thailand risks unemployment surging to 10 million people if the pandemic lasts another 2-3 months, according to the private sector.

Kalin Sarasin, chairman of the Thai Chamber of Commerce, said up to 7 million workers have been laid off so far, with figures likely to reach 10 million over the next few months if the pandemic continues.

"We hope the number of laid-off workers will not surpass 10 million," he said.

The chamber is asking the government to rev up relief measures for the business sector.

On April 8, Prime Minister Prayut Chan-o-cha ordered the formation of the advisory committee, with 13 members from the public and private sectors to hear suggestions about the government's existing measures and how to best apply the 1 trillion baht in loans to be secured from the recently issued royal decree to optimise benefits for companies and employees.

The government hopes the private sector proposes additional opinions about relief measures for the pandemic and a rehabilitation plan for the economy after the deadly virus ends.

NESDC plans to hold advisory committee meetings every 1-2 weeks before submitting proposals to the prime minister.

On Monday the private sector presented 12 proposals, including one to allow the private sector to use expenses spent to curb the spread of the pandemic to claim deductions of up to three times; to exempt corporate income tax for SMEs for two years and lower corporate income tax for other business operators at not more than 20%; to allocate a budget to create or retain employment and goods purchase from domestic producers; and to allow employment on an hourly basis at 40-41 baht per hour for about 4-8 hours per day.

They also requested the government lower contributions on the part of employers to the Social Security Fund to 1% from 4%; devise financial assistance for employees with a monthly salary of up to 15,000 baht to have the government contribute 50% of monthly wages and companies pay 25%; and to allow the private sector to use expenses spent on labour during the outbreak to claim deductions of up to three times. 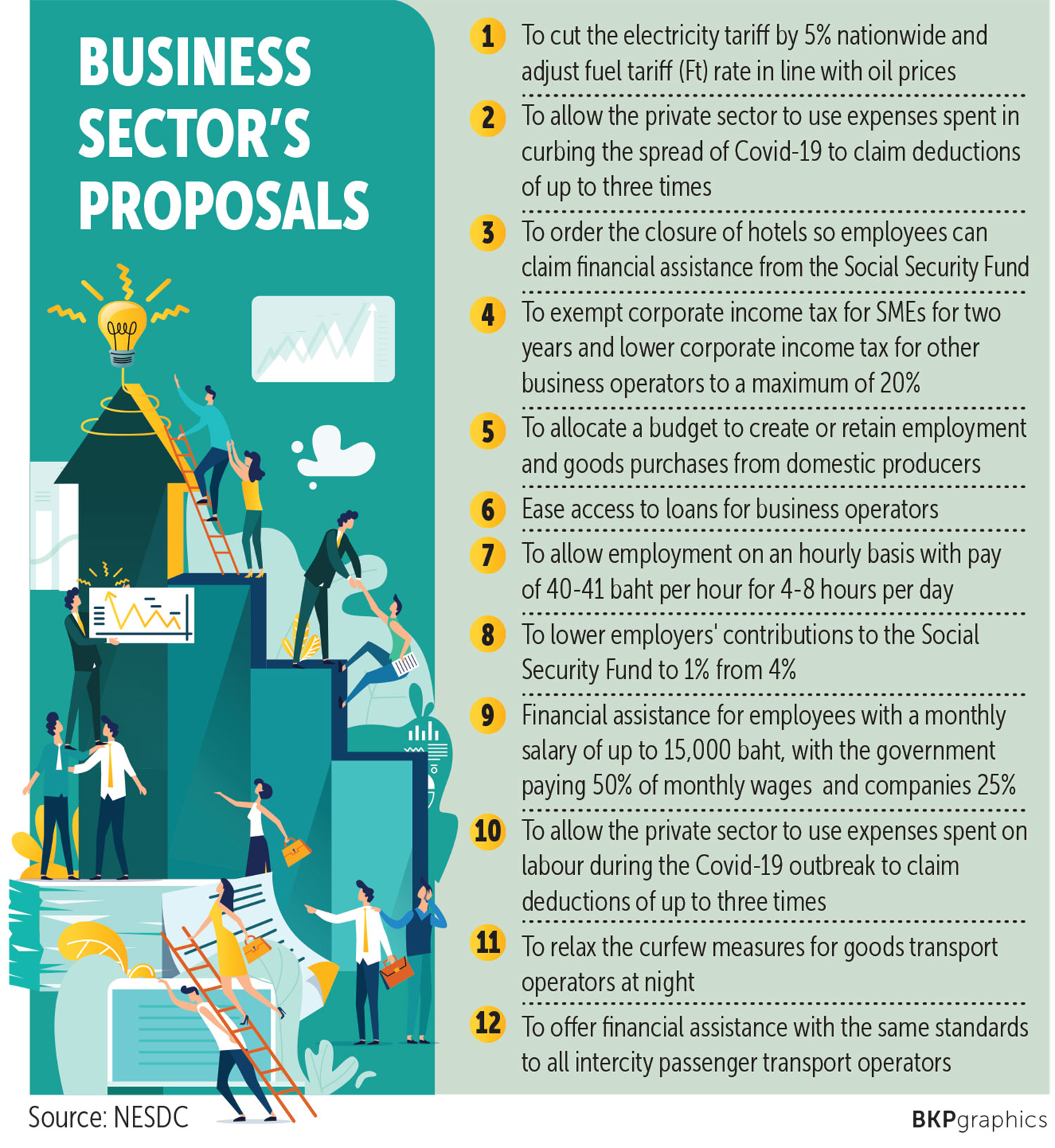 Mr Thosaporn said the next meeting of the advisory committee is scheduled for Monday, during which a decision on the proposals will be made before they are forwarded to Gen Prayut, then on to the cabinet for approval.

Last Tuesday, the cabinet passed an executive decree allowing the Bank of Thailand to extend 500 billion baht in soft loans at 2% annual interest for two years with a six-month interest-free period to SMEs for a credit line of no more than 500 million baht each.

Commercial banks and specialised financial institutions will also offer six-month deferment periods for SMEs with a credit line of up to 100 million baht each.

"The latest aid measures for SMEs may not work as expected as long as commercial banks require collateral to extend these loans," Mr Thosaporn said. "The private sector will later propose how all SMEs can access these soft loans."

Suphachai Chearavanont, chairman of the board for True Corporation, said the world will witness complete change after the pandemic, adding he plans to propose the government implement digital solutions for businesses, education and state services.

"Digital technology should be supported for business, startups and education," he said. "E-meetings should be allowed at both domestic and overseas levels, while the security of online services should be promoted and upgraded."

Applications should be designed to prevent people from going to at-risk locations, said Mr Suphachai.