The prime minister urged moderation as people hurry to cash in their gold after the price rose to its highest level in seven years, fuelled by continuing concerns about the impact of the coronavirus pandemic on the global economy.

“I’m asking people to sell gradually, not in large amounts, as shops may face a cash crunch,” Gen Prayut Chan-o-cha said in a briefing on Wednesday in Bangkok. Officials are trying to work out a plan for gold shops to cope with long queues of sellers, he added.

Queues again formed outside gold shops in Bangkok's Yaowarat earlier in the day, with sellers eager to take profits. Long lines have been seen since early this week as gold prices trended upwards.

A similar story was reported in many provinces.

Association chairman Jitti Tangsitpakdee said on Tuesday that some shops were starting to have cash flow problems, as sellers outnumbered buyers in recent days.

Rumours have spread on social media that gold shops would be closed as they were running out of cash, but Mr Jitti reassured buyers on Wednesday that they would remain open. Traders wanted to help people who needed cash during this time of economic difficulty. 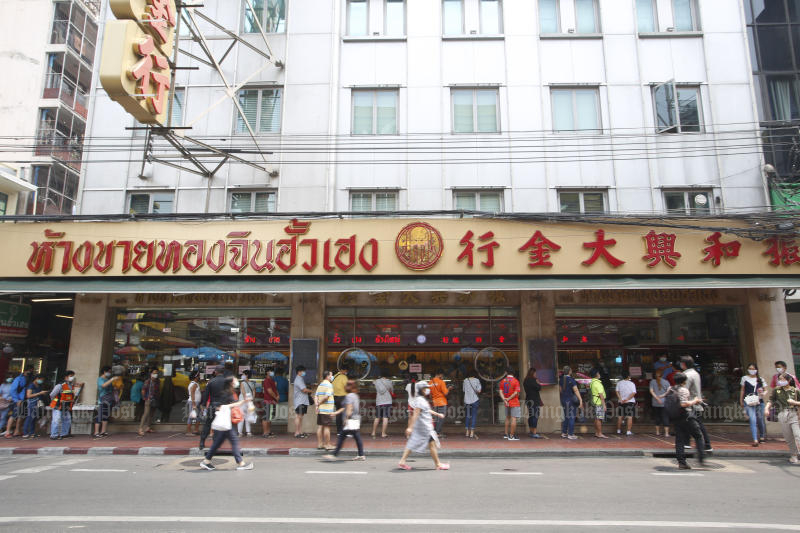 "Customers want cash for daily spending, so they decide to sell their gold," she said.

Gold prices fell on Wednesday as investors locked in profits after the metal rallied to a seven-year high in the previous session, but fears of a deep global economic recession due to the coronavirus pandemic limited the pull back.

"Gold is consolidating gains at the top of its range … but there's so much uncertainty in the world and so much of conflicting information that's also supportive for gold," said Jeffrey Halley, a senior market analyst at OANDA. There was some profit-taking in gold, Halley said, adding that "stocks and gold have been pumped to these levels by the recent $2 trillion of extra stimulus announced by the US Federal Reserve".

Demand for gold tends to benefit from widespread stimulus from central banks, as it is often seen as a hedge against inflation and currency debasement. Lower interest rates also cut the opportunity cost of holding non-yielding bullion.

Asian shares paused near one-month highs, as warnings of a deep recession dampened investor optimism that the slowing spread of the coronavirus could allow businesses to re-open. While the top infectious disease adviser of US President Donald Trump said the May 1 target for restarting the economy is "overly optimistic", the Fed was grappling with the challenge of how to re-open the economy, having launched a funding backstop.

The retreat from riskier assets followed the International Monetary Fund's prediction that the global economy may shrink by 3% in 2020 due to the pandemic, in the worst downturn since the Great Depression. The contagion, which has infected more than 1.9 million people and killed 120,670, has forced countries to shut activity and prompted central banks to unleash unprecedented support measures.

Gold exchange traded funds continued to see inflows, with holdings of the world's largest gold-backed ETF, SPDR Gold Trust now near its highest since May 2013, at 1,017.59 tonnes.