People queue up for donations outside the Department of Agriculture in Bangkok on May 25, 2020. (Photo by Arnun Chonmahatrakool)

The Bank of Thailand has reduced its economic outlook to a contraction of 8.1% this year, deeper than the 1997 financial crisis, but kept the policy rate on hold at 0.50%.

The latest economic forecast for 2020 is worse than the record contraction of 7.6% for the Tom Yum Kung crisis, said Don Nakornthab, senior director for the economic and policy department.

A double-digit contraction is expected in the second quarter, he said.

"The deeper contraction is mainly the result of weaker external demand, especially tourism and exports," he said.

The MPC in March predicted the economy in 2020 would contract by 5.3%.

Mr Titanun said the central bank raised its forecast for 2021 economic growth to 5% from 3% projected three months ago.

The Bank of Thailand worsened the export contraction outlook to 10.3% from 8.8% previously forecast, while lowering foreign tourist arrival numbers from 15 million to 8 million this year.

In the second half this year, foreign tourists are expected to tally only 1 million, he said.

Domestic demand, both private consumption and private investment, would also contract more than previously assessed. Employment and incomes were projected to decline. Nevertheless, economic activities exhibited signs of improvement following the relaxation of the containment measures. 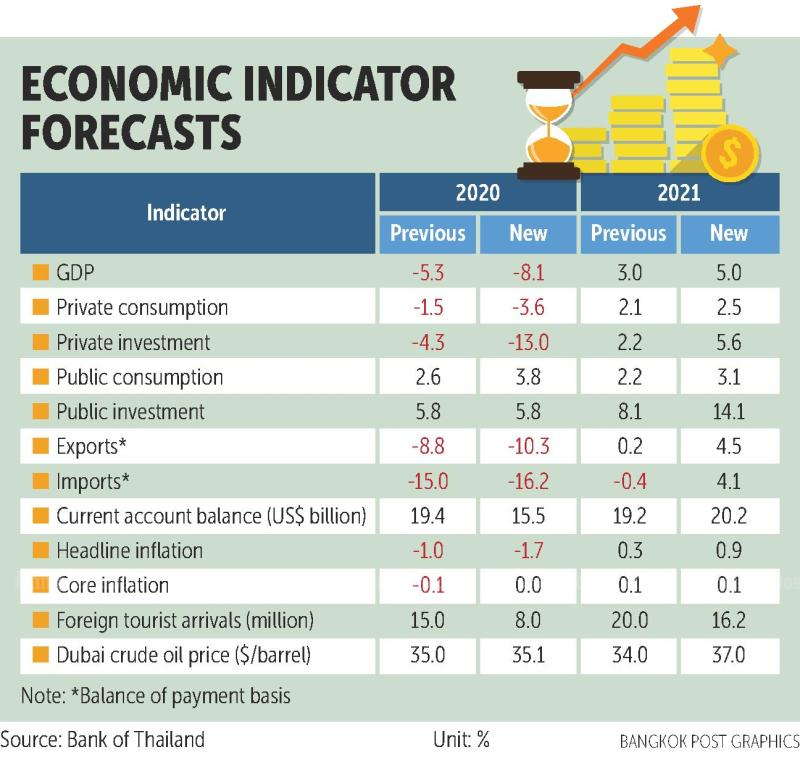 "Under the central bank's scenario, we expect the Thai economy hit bottom in the second quarter. But the 8.1% contraction projection for the full year does not take into account a second-wave outbreak," said Mr Titanun.

He said the MPC believes economic activities will gradually recover in the second half this year in countries that can effectively contain the outbreak, including Thailand. The contraction rate is expected to narrow in the third and fourth quarters.

Households need help with their financial burden to overcome the crisis, he said, while the labour structure needs improvement to support an economic recovery after the pandemic.

The central bank also lowered its forecast for headline inflation to -1.7% in 2020 from -1% predicted in March, but expects a return to positive 0.9% next year.

The committee voiced concerns a stronger baht could deal a blow to recovery, so it plans to closely monitor developments in foreign exchange markets as well as assess the necessity of implementing additional appropriate measures. Given the quantitative easing policies of several central banks, the Bank of Thailand has been closely monitoring higher foreign capital inflows.

Tim Leelahaphan, economist at Standard Chartered Bank, forecast the central bank will cut the policy rates by 25 basis points to a fresh record low of 0.25% next quarter.

"We do not rule out further policy rate cuts below the 0.25% level, however. Negative rates are unlikely, but not off the table," he said.