A banner reminds residents and visitors not to lower their guard against Covid-19 at the famous Mon Bridge in Sangkhla Buri district of Kanchanaburi. (Photo: Piyarach Chongcharoen)

KANCHANABURI/SURAT THANI: Fear of the coronavirus has driven off tourists planning a trip to Thong Pha Phum border district in Kanchanaburi during the long weekend beginning on Friday.

But elsewhere, hopes are high that holiday visitors will inject a much needed boost into flagging local economies.

Thong Pha Phum mayor Prathes Boonyong said on Thursday that most reservations for accommodation had been cancelled since the Covid-19 scare caused the temporary closure of a school in the district.

Ban Kae Yui School was shut on Tuesday morning for a clean-up after three students came in close contact with illegal migrants from Myanmar who developed a fever soon after they arrived and stayed at their house. With a Covid-19 outbreak reported in Myanmar, this caused immediate alarm.

A test for the students were conducted at Thong Pha Phum Hospital and doctors later said they were not infected with the Covid-19 virus. Nor were the Myanmar visitors.

The school announced on its Facebook page that classes will resume on Tuesday next week.

But the changed plans of tourists devastated vendors and other businesses that had expected to benefit from out-of-town spenders during the long weekend. Friday and Monday are holidays in lieu of Songkran.

While Thong Pha Phum's hopes hav been dashed, the neighbouring district of Sangkha Buri still has expectations of a return of tourists during the long break. It has the added attractions of the Three Pagodas border pass and the famous Mon bridge - and no covid scare.

Garden Grove Resort manager Witsanu Thitiwetchakhun said intending guests had phoned up to ask about the virus situation. They were reassured to learn the district was safe, and no-one had cancelled their booking.

Kwanchanok Sramunee from Phatthalung, who was on her first visit to Sangkhla Buri on Thursday, said  she had confidence in the safety measures in place to prevent the spread of the virus. She also praised Sangkhla Buri as one of the most scenic districts in Kanchanaburi.

Thailand has increased patrols along the border with Myanmar since the outbreak was confirmed there. It was first reported in Rakhine state, in the west, but infections have since spread.

The number of infections in Myanmar had risen to 919 on Tuesday, with people in seven townships in the Yangon region also ordered to stay home. (continues below) 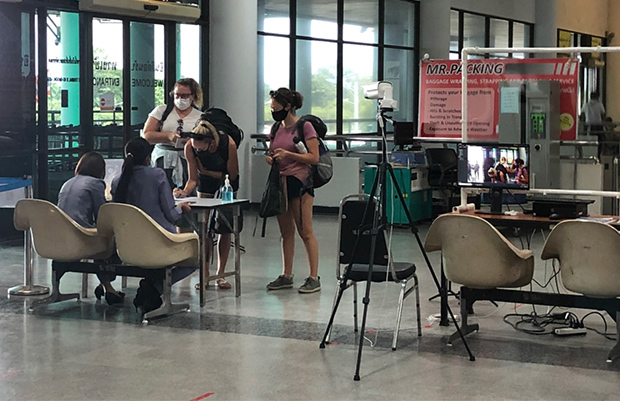 Tourists at Surat Thani airport, a main gateway to Koh Samui and other destinations in the southern province. (Photo: Supapong Chaolan)

Further south, Surat Thani province was looking forward to an influx of people during the four-day break.

The provincial office of the Tourism Authority of Thailand on Thursday predicted 27,000 visitors.

Office director Nanthawan Siriphokhapat said they were expected to leave behind about 124 million baht, spent on accommodation and other goods during the holiday.

"The We Travel Together campaign of the government that includes discounts on hotel accommodation and air tickets to Koh Samui are a factor encouraging travel," she said.

Worasit Phong-amphan, president of the Tourism Association of Koh Samui, said Bangkok Airways and ferryboat operators had doubled their services to the island during the holiday.