With debt relief measures due to end this month, the pressure on struggling companies couldn't be higher

Khao San Road businesses were forced to close because of the Covid-19 pandemic, which damaged the business environment nationwide. Apichart Jinakul

Fears of a debt tsunami are amplifying with debt relief measures by the Bank of Thailand set to expire later this month. Suffering businesses are urging an extension to avoid shouldering a mountain of debt that could make them go under.

Non-performing loans (NPLs) in consumer finance are edging up amid the economic downturn aggravated by the coronavirus pandemic.

Gross outstanding NPLs in the second quarter totalled 509 billion baht, equal to 3.09% of total loans, up from 3.04% in the previous quarter.

In an attempt to help struggling businesses and retail borrowers, the central bank laid out four categories of relief measures, spanning multiple types of policies such as interest rate reduction, debt payment deferment and reduction, provision of additional credit and debt restructuring.

There have been two phases of debt relief measures. The first started in April and the second in July. The aid programme is due to end this month.

If loans to small and medium-sized enterprises (SMEs) were to become NPLs after the programme ends, a vicious cycle would occur in which commercial banks would have to beef up loan provision, subsequently affecting their net profits and share prices, said a Finance Ministry source speaking on condition of anonymity.

"Many banks have extended their own debt suspension measures despite how the central bank remains muted on this," the source said. "Year-end orders usually come in a huge number, therefore banks have to help support SMEs to go through this period." 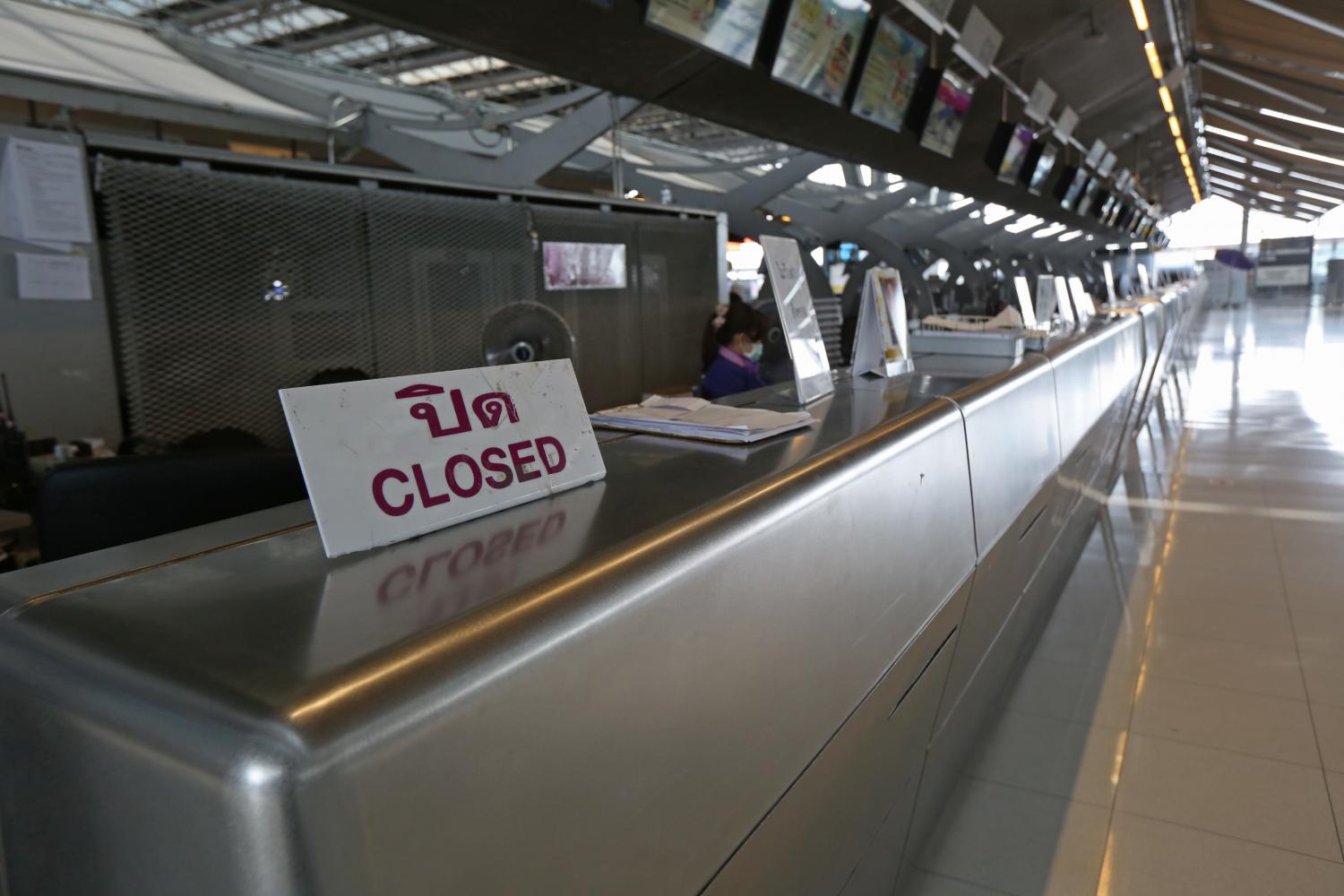 The THAI counter at Suvarnabhumi airport. Tourism firms and airlines have been hit hard by the coronavirus.  Varuth Hirunyatheb

An uphill task for the next Bank of Thailand governor, Sethaput Suthiwart-Narueput, is dealing with the looming prospect of a huge amount of NPLs. The Federation of Thai Industries (FTI) believes that most of the 12.6 million loan accounts cannot be cleared when the debt relief measures end on Oct 22.

When this problem combines with other economic headaches in store, Thailand will be hit by another powerful uppercut.

The new governor needs to start seriously thinking about ways to brace for surging NPLs and launch urgent measures to solve them.

The FTI made its NPL outlook based on information that up to 12.6 million accounts, worth 7 trillion baht, are currently protected under the debt moratorium scheme and many may not survive after October.

The main reason is that most debts belong to small and medium-sized enterprises (SMEs), said FTI vice-chairman Kriangkrai Tiannukul.

"This group will certainly be unable to repay debts," he said, adding that many of them are still undergoing a liquidity shortage because they cannot resume business during the global economic recession.

"The government badly needs to look into the problem," Mr Kriangkrai said.

Without help from authorities, these SMEs may need to permanently shut down their businesses and will flood commercial banks with NPLs.

According to Mr Kriangkrai, banks are required to maintain CAR of at least 11-12% of capital funds. He is not confident that they will be "strong enough" to deal with increasing NPLs.

Mr Sethaput also needs to introduce collaborative economic relief measures with the new finance minister to help Thailand get through the Covid-19 crisis.

"Both of them must help drive the economy forward, or protect it against a further plunge, at least until a Covid-19 vaccine is publicly available," Mr Kriangkrai said. "This should take at least two years." 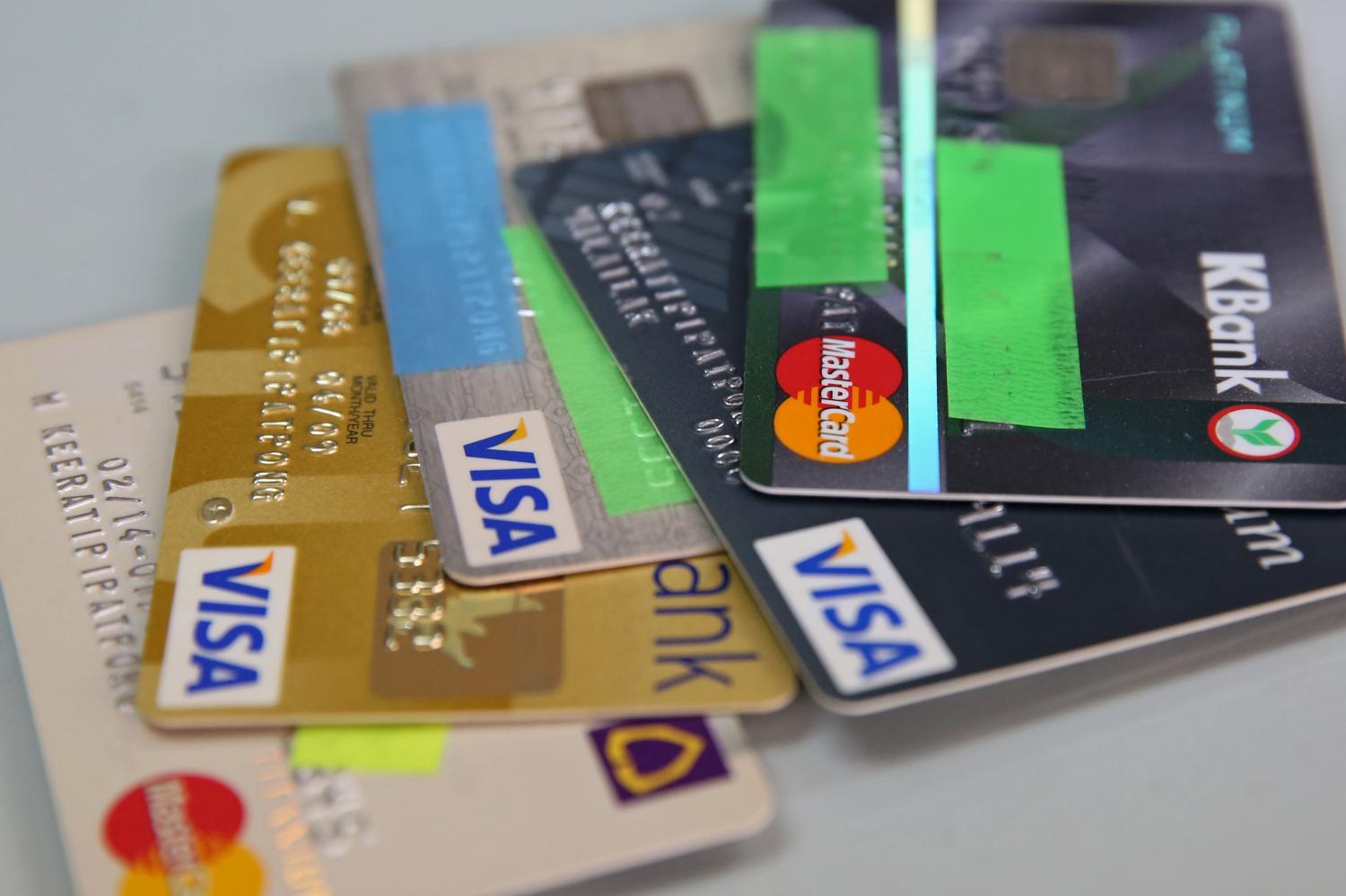 Thailand's ratio of household debt to GDP rose to 84% during the second quarter of this year. Varuth Hirunyatheb

The Puey Ungphakorn Institute for Economic Research (Pier), a research house under the Bank of Thailand, forecasts that 3.4 million consumer loan accounts from 2.1 million retail borrowers will exit the central bank's debt relief measures for the first phase from April to July.

Pier estimates that there are 8.1 million consumer loan accounts, with a total credit line of 2.2 trillion baht, which have applied for the first-phase debt relief programme.

The assumption is based on big data analytics from 5.89 million borrowers reporting to the National Credit Bureau (NCB).

Borrowers who are expected to exit the programme mostly live in Bangkok. This group has a debt amount below 250,000 baht for each borrower.

"Under the existing economic downturn, fragile household debt and a possible second-wave virus outbreak, if the central bank's second-phase debt relief measures are excluded, about 2.1 retail loan borrowers from 2.5 million accounts, or 9.1% of total borrowers reporting to the NCB, could see a deterioration in debt repayment and face mounting problems," Ms Atchana said.

Borrowers living in rural provinces mainly take out personal loans, followed by housing loans. Most of the borrowers have several loan accounts, hence the need for financial assistance from financial institutions, according to Pier.

Based on Pier estimates, those applying for the debt relief measures in July totalled 460,000 accounts from 280,000 borrowers.

With the pandemic still at large, Thailand faces a challenging debt problem. The ratio of household debt to GDP in the second quarter swelled to 84%, an 18-year high, representing a value of 13.6 trillion baht. The latest ratio is a significant increase from 50.4% in 2009.

With an estimated 8.1 million consumer loan accounts entering the first-phase debt relief measures, 42.6% are expected to remain in the programme until October, while 16.6% can exit the programme before it expires at the end of this month. The remaining percentage was not elucidated by Pier.

The programme exit boils down to borrowers servicing their debts normally or renewing loan agreements with creditors. This reflects the fact that borrowers have been affected differently by the pandemic and chose different debt relief instruments.

Some 71% of borrowers applying for the debt relief measures are expected to prolong the debt instalment period, while 26% are required to cut the loan amount of monthly instalment.

Meanwhile, 3% are classified as non-performing loans (NPLs) and will undergo debt restructuring for unsecured loans in the central bank's Debt Clinic project.

Some 76.4% of total accounts entering the first-phase debt relief programme are identified as good loans, 98.3% are expected to face a debt default of no more than 30 days, and 41.3% show a high debt burden.

The majority of loans are identified as auto loans and largely require a loan amount reduction for monthly debt instalments.

With this scenario detected, the information shows that non-bank companies are more fragile than other types of financial institutions, with the overall financial segment saddled with rising NPLs.

"In the event of a persistent Covid-19 crisis, this could lead to higher credit risk of the financial segment [especially non-bank companies]," Ms Atchana said. "On average, a borrower from non-bank companies shoulders a debt burden in the highest amount of 500,000 baht, with at least 4-5 accounts, compared with 100,000 baht at other types of financial institutions." 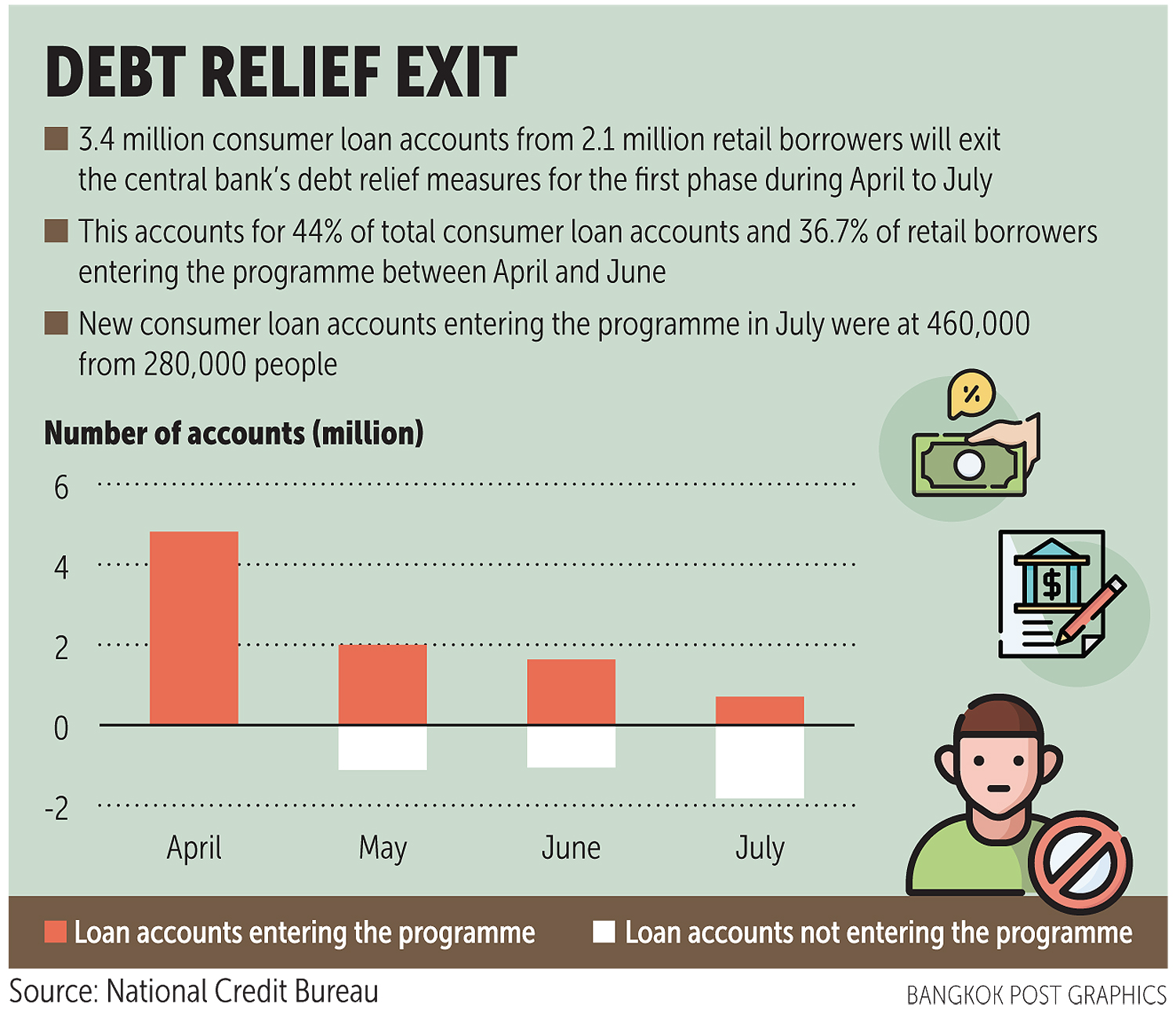 Companies in the logistics sector have shouldered the brunt of the Covid-19 impact, but so far commercial banks have been reluctant to grant loans for fear of financial risk.

Thongyoo Kongkhan, adviser to the chairman of the Land Transport Federation of Thailand, said the new central bank governor should speed up issuing soft loans to afflicted businesses.

The central bank has been offering 500 billion baht in soft loans at 0.01% interest to financial institutions for two years to re-lend to small and medium-sized enterprises (SMEs), with a maximum credit line of 500 million baht at 2% interest.

To be eligible, SMEs must operate domestically, be non-listed companies, have a credit line of up to 500 million baht from financial institutions, and continue to service debt or make late payments of less than 90 days at the end of last year.

"But these banks are so slow to lend money that many businesses die out and disappear," Mr Thongyoo said. "The Bank of Thailand governor must have a closer look at these banks to see what happens."

An interest rate incompatible with banks' financial costs is the main reason why the Bank of Thailand's soft loan programme has floundered, according to a source at a state-owned financial institution.

The soft loan cost incurred by the central bank is 1 satang, and the central bank offers the loan to commercial bank at a cost of 2 satang in a bid for banks to re-lend to their own customers at no more than 2%, said a banking source speaking on condition of anonymity.

Most banks do not want to offer the soft loans at a low interest rate, despite having a low lending cost, as their financial burdens exceed 2%, the source said.

In the broader economic context, the country needs a finance minister to help solve the tepid economy, Mr Thongyoo said.

"Tourism has almost died," he said. "Exports remain in contraction. The state budget seems to be a powerful tool to drive economy, but we have not had a new finance minister to sign off on important projects." 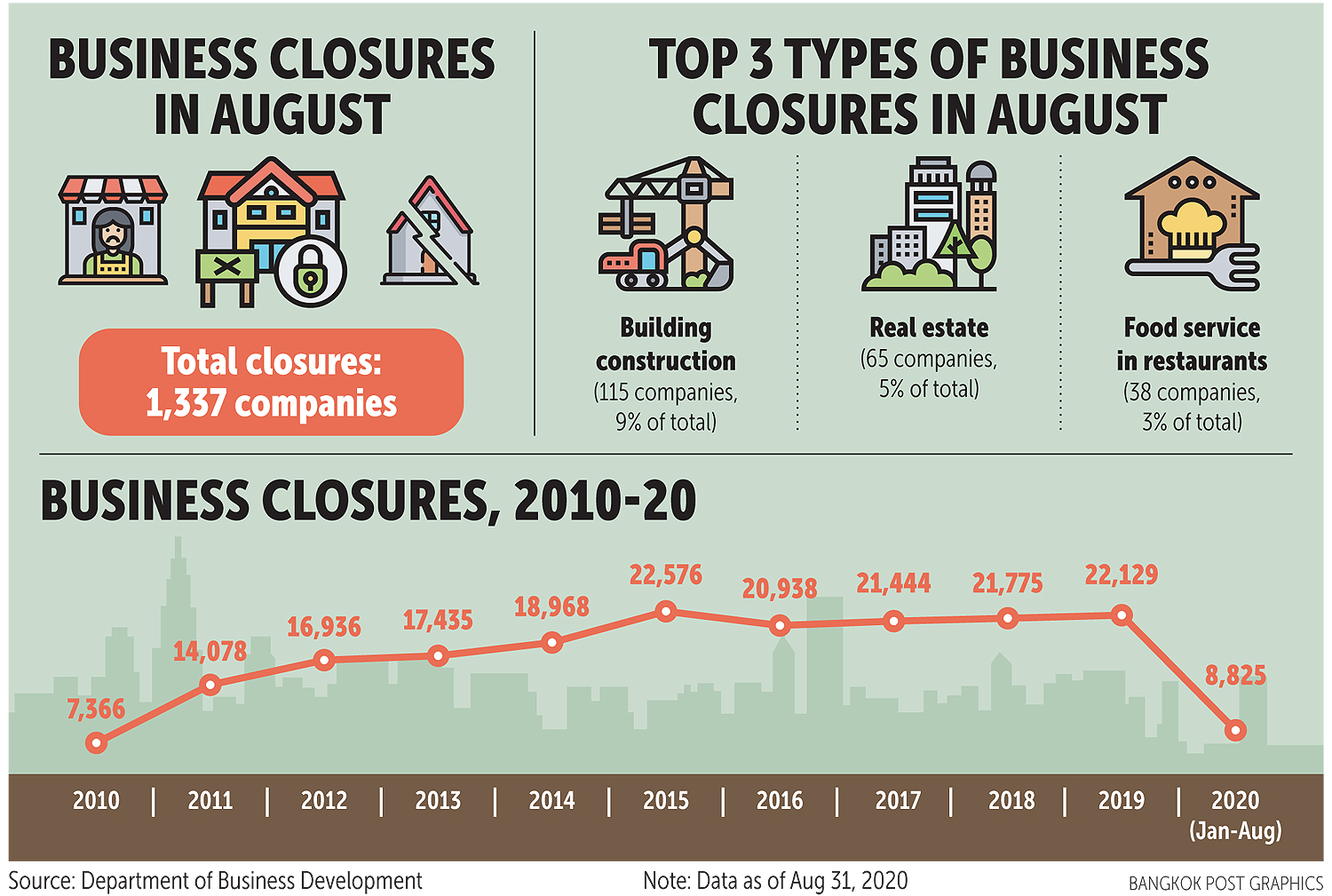 Chairat Trirattanajarasporn, president of the Tourism Council of Thailand (TCT), said the council has held discussions with operators in Chiang Mai, Phuket, Prachuap Khiri Khan, Udon Thani and Rayong during the past months to hear about problems.

Inaccessibility to financial aid is the major obstacle for most operators. Although the government has already prepared the budget, only 5% of them can get soft loans at the moment, Mr Chairat said.

He said the prime minister has to give clear authority to the Finance Ministry or the Bank of Thailand to let commercial banks ease lending conditions while providing a 30-50% guarantee from Thai Credit Guarantee Corporation to avoid non-performing loans in the future.

Meanwhile, a debt holiday is crucial for short-term survival, as debtors need the scheme to be extended until the end of next year to help maintain business.

Mr Chairat said the Joint Standing Committee on Commerce, Industry and Banking has submitted the proposal, asking to repay only 10% of interest in case the government cannot extend repayment suspensions any further. There has been no response from the government.

Mr Chairat stressed that TCT's previous proposal to set up a tourism fund or tourism bank is still the best solution for the hospitality industry, as this mechanism could help fix the industry in a practical way when facing crisis.

"The government always says the tourism industry is the most important economic engine," he said. "But now they've abandoned us all."