A student sells miang kham packets at the Siam skytrain station during the school break to pay for his tuition. (Photo by Apichit Jinakul)

Around 1.5 million Thais were estimated to enter into poverty in 2020 due to the pandemic, says the World Bank.

Thailand's poor totalled 3.7 million in 2019 and the tally was expected to rise to 5.2 million in 2020, attributed mainly to adverse effects from the pandemic crisis, said Kiatipong Ariyapruchya, senior economist for Thailand at the World Bank.

The number of poor people is expected to decline to 5 million in 2021 because of a recovery in employment as the economy is expected to eventually rebound, said Mr Kiatipong.

The World Bank defines the poverty line at daily income of US$5.50 (165 baht) per person.

"The outbreak affected the Thai labour market significantly, particularly during the first half of last year, which led to higher unemployment and more underemployed workers. This reduced the income of Thais," he said.

In the first half of 2020, Thailand recorded 340,000 net job losses, with reduced working hours of around three hours for women and two hours for men.

Private sector wages declined by 1.6%, largely in the agricultural sector.

The situation started to improve in the third quarter, with employers adding nearly 850,000 net jobs during the period, with a continuing push into November.

While the labour market made a tentative recovery, working hours in November were still below the same period of 2019.

According to "Restoring Incomes; Recovering Jobs", the latest edition of the World Bank's economic monitor of Thailand released on Wednesday, the economy is estimated to dip by 6.5% in 2020, with a projection of 4% growth in 2021.

A sustained recovery in employment will be essential to help the country bounce back in 2021-22, said the report.

Thailand's GDP growth rate is estimated at 4% this year in a base-case scenario, where the government contains new outbreaks and does not implement a nationwide lockdown, according to the World Bank.

If the outbreak cannot be contained and the government imposes a lockdown across the country, the growth rate would be 2.4% in 2021. 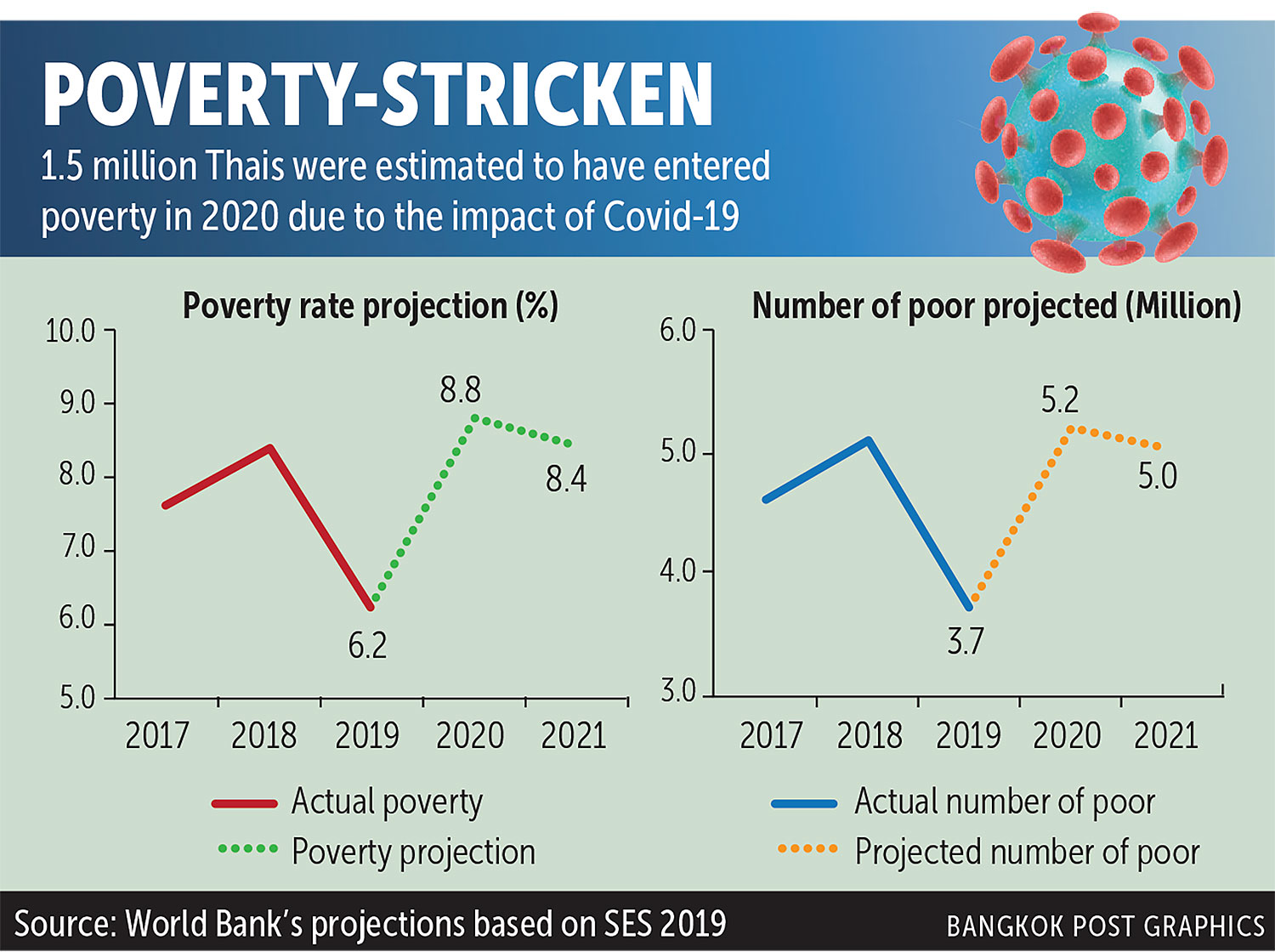 Vaccinations for 50% of the Thai population is expected by the second half of 2021, which should gradually improve the country's tourism industry. Under this scenario, the World Bank predicts a growth rate of 4.7% in 2022.

Global economic activities remain weaker than expected, while progress in developing and disbursing vaccines has slogged down, resulting in lockdowns both locally and internationally, he said.

The pandemic has made Thailand's labour market more vulnerable. Improvements in employment, productivity and labour incomes, especially among the poor, will be necessary for a sustainable recovery, said Birgit Hansl, country manager for Thailand at the World Bank.

The World Bank recommends in the short term, the government sets up training programmes to improve workers' skills and provide financial support.

In the longer term, the government can increase employment by making childcare more accessible and decrease its cost to help drive female labour force employment.