However, the new wave of Covid-19 infections at the end of 2020 affected private consumption expenditure adversely, prompting the government's planning unit -- the National Economic and Social Development Council (NESDC) -- to lower its economic growth forecast for a second time to 1.5-2.5% from 2.5-3.5% made on Feb 15 and against 3.5-4.5% growth made in November last year.

In the final quarter of 2020, the economy shrank 4.2% from a year earlier but expanded to a revised 1.1% for the quarter.

"Although there were various supporting factors in the first quarter, they were not enough to drive overall economic growth," said Danucha Pichayanan, the NESDC's secretary-general.

He cited the decline of private consumption, tepid tourism, and the loss of business at restaurants and hotels which fell by 0.5%, 63.5%, and 54.3%, respectively, which weighed down economic growth in the first quarter. 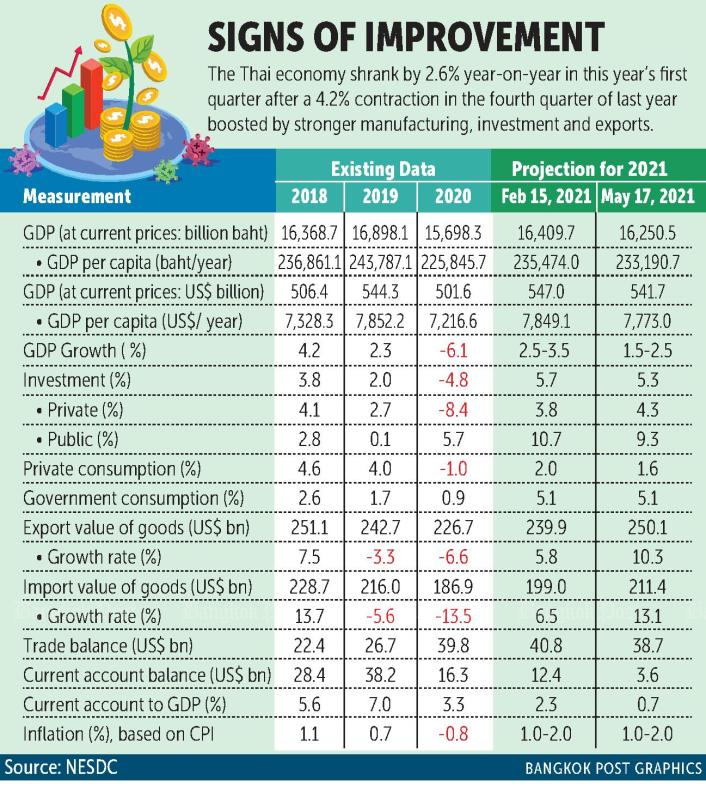 He said the second wave of Covid-19 infections played a key part in contraction in the first quarter while the third wave of infections, which began in April has led the agency to revise down Thai economic growth this year to 1.5-2.5% or an average of 2%, a sharp decline from the 6.1% predicted in 2020.

He said these projections are based on the government's likelihood of getting infections under control by June of this year; global economic growth of 5%, growth in world trade by 7.8%; an exchange rate of 29.8-30.8 baht against the US dollar and Dubai crude oil prices between US$56-68; and 170 billion baht worth of revenue to be generated from 500,000 foreign visitors this year.

He said the key contributors to Thailand's economic growth this year will stem largely from a significant recovery of the global economy and merchandised trade, government expenditure, and the low growth base in 2020.

In total, it is expected that export values of goods, private consumption expenditure, private investment and public investment will increase by 10.3%, 1.6%, 4.3%, and 9.3%, respectively. Meanwhile, headline inflation is expected to be in a range of 1.0-2.0% and the current account to register a surplus of 0.7% of GDP.

For the remaining months of the year, the NESDC also advised the government to contain domestic outbreaks to minimise cases and to prevent new waves.

"It also needs to continually enhance public health capabilities to efficiently control the current situation and to prepare to cope with [if any] additional waves and provide precise and accurate information to the public in order to build confidence about vaccination and run campaigns about public health guidelines to prevent additional outbreaks and to reduce the possible risk of post-vaccination infections."

The government is also being urged to implement targeted economic measures to support affected people, labour and businesses together with economic recovery policies; encourage the export of goods, increase foreign income and bolster manufacturing and private investment recovery; stimulate private investment and maintain growth momentum from government expenditure and investments.

The state planning agency also recommended the government prepare for re-opening to foreign tourists and to maintain the domestic political environment amidst vulnerabilities due to the Covid-19 outbreak.

KYIV, Ukraine: Ukrainian Presidential aide Mykhaylo Podolyak on Monday called the International Olympic Committee (IOC) a "promoter of war" after the sports body said it was considering ways for Russian athletes to compete.