A traveller wears a face mask at Suvarnabhumi Airport which is almost deserted due to the lack of foreign travellers amid the Covid-19 pandemic. (Photo by Somchai Poomlard)

Prime Minister Prayut Chan-o-cha said on Wednesday Thailand will fully reopen by mid-October, with all businesses able to resume normal operations and visitors free to travel across the country.

Ms Kulaya said the 120-day target falls in the fourth quarter, in line with the FPO's forecast made in April that foreign arrivals will return to Thailand in greater numbers during this period. 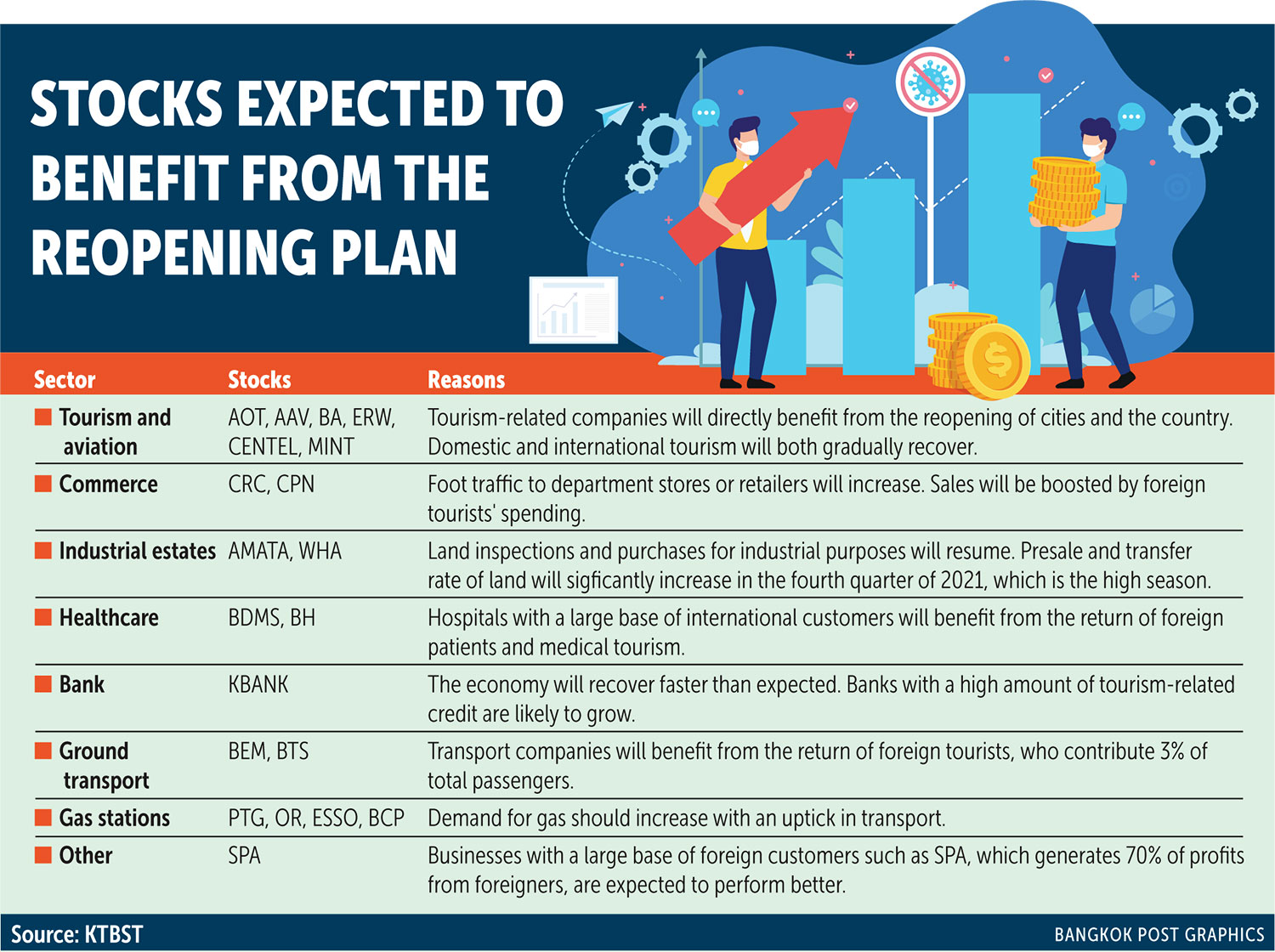 The FPO predicted if the country can fully reopen this year, Thailand will record around 2 million foreign tourists, of which 190,000 are expected to arrive in the third quarter and another 1.7 million in the fourth quarter.

She said it is too early to say whether the planned reopening will boost the economy to grow beyond 2.3% because a higher rate of growth depends on if Thailand achieves its vaccination target.

The premier said on Wednesday roughly 50 million people will have received at least one Covid-19 vaccine jab by the mid-October deadline.

Thailand's economy has struggled because of the severe impact of the pandemic.

In April, the FPO reduced its economic growth forecast for 2021 to 2.3%, down from 2.8% in January, primarily due to the third wave that began in April.

In 2019 Thailand welcomed 39.9 million foreign visitors, which generated 1.91 trillion baht for the country.

Revenue from the tourism sector accounts for 12% of GDP.

Despite the government pledge, Thailand's vaccination delay and the cross-border travel policy of other countries are the key factors keeping KKP's tourism forecast meagre.

Chinese travellers have recently made up around 25% of offshore arrivals, but Beijing has signalled no change to the country's border closure despite its vaccination progress.

China has switched focus to domestic tourism, in part to support local tourism for the longer term, said the research house.

KKP Research predicts Chinese tourists will not return to Thailand in significant numbers this year.

For its base-case scenario, KKP Research predicts Thailand's vaccination effort to cover 50% of the total population this year.

The group believes it needs to cover 80% of the population to reach herd immunity, which it forecasts by the second quarter of 2022 based on vaccine efficiency and virus mutation.

If the government misses the vaccination target, it would delay herd immunity to the second half of 2022.

Under its worst-case scenario, KKP Research predicts a delay in the vaccination programme would hurt the Thai tourism sector and economic growth would slow.

Given higher uncertainties, especially regarding vaccination, the research house slashed its economic growth projection for this year from 2.2% to 1.5%.

Naris Sathapholdeja, head of ttb analytics, the research house of TMB-Thanachart Bank (ttb), said Thailand would achieve its goal of 50% of the population receiving a first Covid-19 shot this year.

However, ttb analytics wants to monitor government progress towards its reopening date, as the main factors are sufficient vaccine supply and site capacity to administer the jabs.

"We're more concerned about supply management rather than capacity," he said.

"If the government can manage to administer 400,000 doses per day for the next four months, it would achieve its target to reopen the country safely within 120 days."

If the government succeeds in vaccinating 50% of the population with a first dose by mid-October and reopens the country, it would encourage economic activities, said the research house.

Assuming this scenario, ttb analytics forecasts Thai economic growth of 2% this year, up from 1.8%.